thatgermandude in #math • 11 months ago (edited)

To get out of the gate with a short proof: We all know the binary System where 1+1=10, so we know that there can be circumstances where 1+1=/=2. We could now 'easily' construct a System where 2+2=10 and our point is proven. 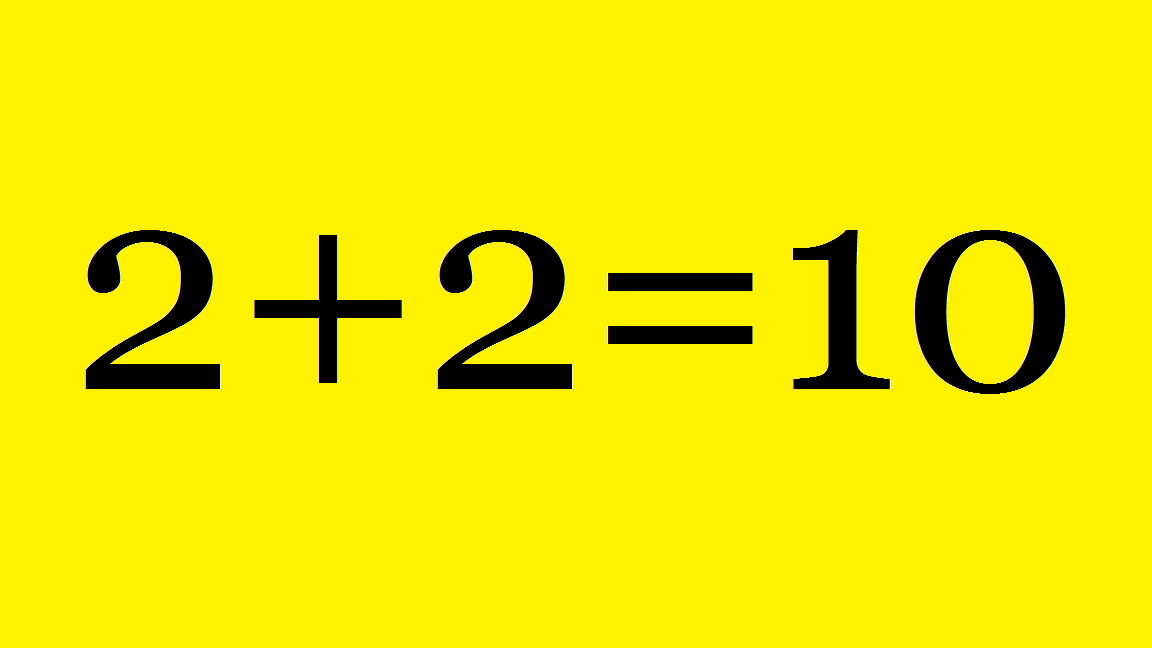 Instead of constructing the system where 2+2=10, I want to talk more about the Axioms that make 2+2=4 a conventional truth yet not an absolute one. In math we have so called Axioms, Basic Truths would be a better word for them. They are truths that are accepted without any proof. They are used to define objects like the natural numbers N, being all normal numbers without a "," like 1,2,3... . A funny side note is that there is a dispute if 0 is a natural number or not. For me 0 is definitely not a natural number. So often I had to say "all natural numbers excluding 0" just because for so many retards the 0 is included, but I'm obviously rambling, back on topic.

So one of the Axioms of the natural numbers is counting. "Every natural number n has exactly one follow up number n+1" or sth like that.

Another one is that we have a plus sign "+" which is defined as n+m is the m-th follow up number of n.

Then we have the main crux and I really hope I don't misremember but I think the notation in the decimal system is also an Axiom of the natural numbers.

These Axioms are really not something you encounter if you just do school or business math. But they are similar to basic values you have to have when engaging in philosophical or political debate. This can be debate culture, where even German politicians seem to struggle a lot. Or this can be an ethical foundation like the NAP. It can often be helpful to look at the most basic values a person holds to see where a severe disagreement might stem from.

I am no historian but I know that our number system somewhat evolved from the Arabic number system. It is obviously based on us having 10 fingers. I think it is even adopted in the Asian realm.

To the original point. I think it makes sense to even question the most basic truths, but you should always keep in mind that there is most likely a good reason it is a basic truth and that there are often whole Systems build around them.

our belief-system already got hijacked ;D
it's some kind of fight of central word definers versus dynamic social word defining..

when I look out into the world it often seems to me as if people don't know the real meaning of words they use anymore..

it's also interesting to understand how words work.
we try to pack emotions we feel while thinking into words..
..and then hope the other side receives the same emotion and meaning..

reminds me of so many pointless "discussions"..

but should we define every word within a discussion?
that would take so much more time and effort than already trying to talk about stuff..

or should we just let a central authority define everything?

also often when people realize the sides have different ideas of what the words and definitions mean, it just becomes a blamegame - instead of honest exchange of ideas/ information.
cuz one side thinks it's further ahead.. and uses "rhetorics" to make the other side look like dumb shit, lol

but should we define every word within a discussion?

not really but kind of yes :D. Things like agreeing on what colors are colored doesn't require much discussion but even there you had the blue/white dress incident. I think it s import to define the big words Freedom, Democracy, Justice, The Left, The Right and a lot of other stuff will logically built up on this like.

In math it is the same you only have very view Axioms. Most rules follow as a logical consequence out of the Axioms.

it just becomes a blamegame

Yeah it is hard to talk about what words mean. The nature of language is more dynamic and social, like you said and while it is important to try to keep our understanding of words as universal as possible. It won't and shouldn't be something completely dictated.

I never claimed science is a social construct I said that parts of math are cultural conventions. Maybe it is not clear what I mean by cultural convention. Social constructs are spooks, no idea what the left wants to say with that term. By Convention I just mean the society wide ruling of an arbitrary rule, like riding your car on the right side of the street. The Notation, the decimal systems these are conventions.

I think most conventions in our society are good. It is forbidden to attack or murder somebody unless you are defending yourself is one of the things that is just common sense for most human societies. Knowledge is build upon conventions, in specific the conventions we have in science. I would agree that the scientific community achieved a lot in the past 300-3000 years so they seem to have some decent fundamentals/conventions, that said they sure are not flawless.

In other parts of society our conventions seem mostly decent as well. I do think most parts of the law, at least the part normal citizens encounter seems fair. Even tho police might be corrupt I think most of the laws themselves are just.

With all that being sad I do not think that you should shy away from changing something just because it is fundamental, but you should respect that it is A. very hard to change and B. might have far reaching consequences that are tough to predict.