lichtcatchtoby in #video • 10 months ago 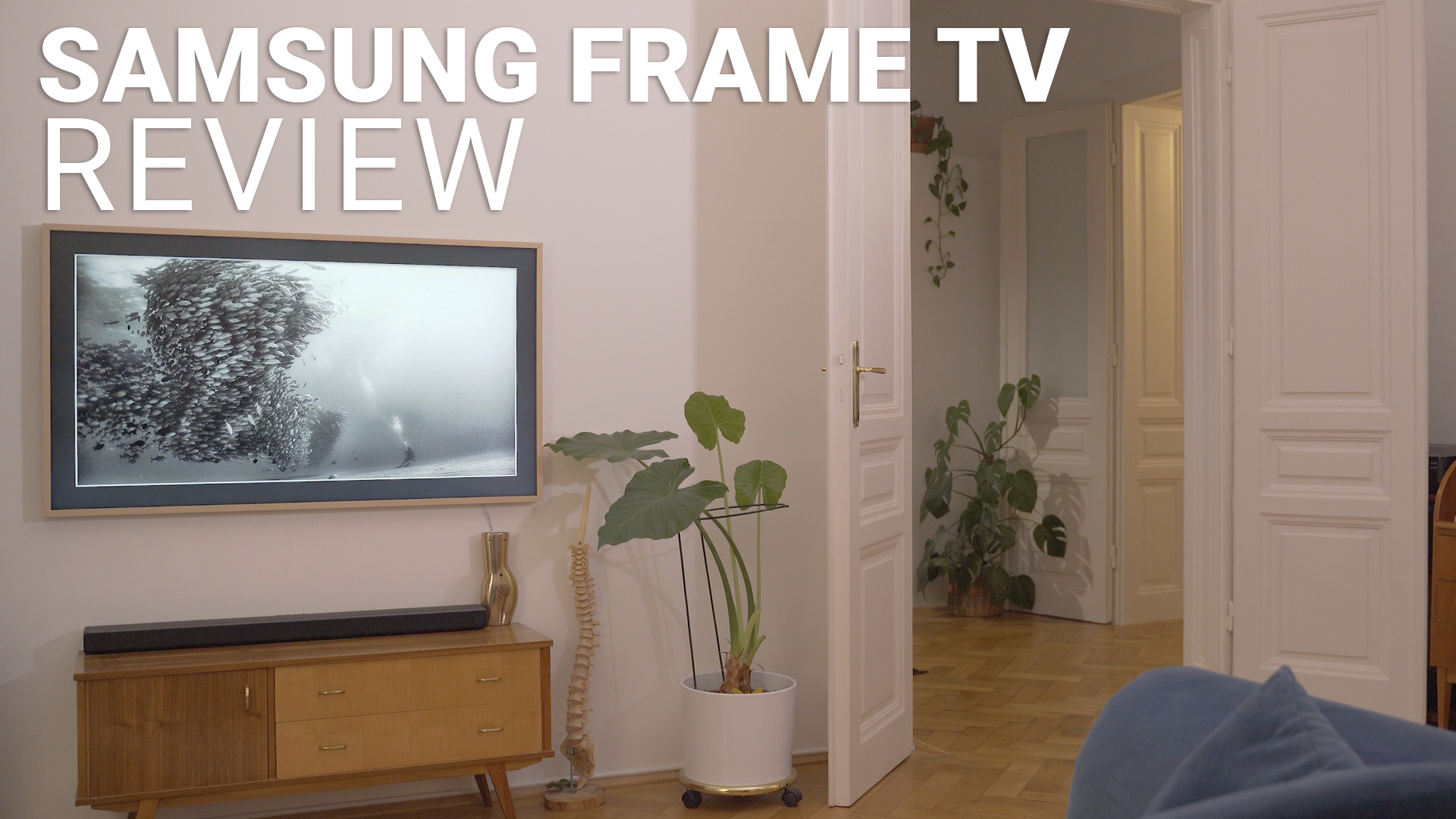 After 6 years of not owning a TV, i bought a Samsung Frame TV (2020 Model). The current lockdown situation sure has had an impact on that decision. I put quite a lot of thought into this purchase. I do like the Frame TV so much, that i decided to do a video review about it:

I hope you guys like it! If you more into reading, here are all my thoughts as text:

The TV features 4K resolution, offers HDR and a refresh rate of 120Hz. The peak brightness is about 550 nits. The TV uses the so called QLED technology, which among other things delivers extremely low input lag. The screen comes with the Samsung one Connect Box, offers a HDMI 2.1 Port and also Freesync support. The operating system is Tizen OS. The so called NoGap-Wallmount is also included. If you are thinking about buying a Samsung Frame TV, then you are probably doing it for the design. Well, that’s at least that what I did. I didn’t want to have a huge black box sitting on an ugly television stand. I wanted a television that blends into the living room, and doesn't stand out. The Samsung frame series offers itself for that purpose for several reasons. First off all the TVs come with the so called “nogap-wallmount”, which lets you mount the TV really close to the wall. If you have a perfectly straight wall, then the no gap claim actually delivers. The walls in my apartment are about 100 years old but still, the TV sits really flat. 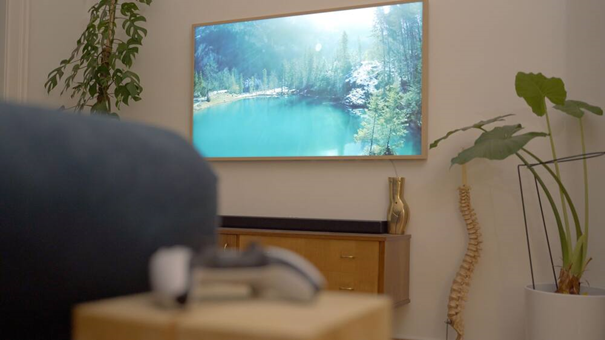 The second feature that lets the TV blend in better is the included one-connect box. There is just once tiny cable that needs to be connected to the TV. This small optical cable powers the TV and carries all the HDMI, USB, Audio and Network connections. By using some nice cable management its quite easy to make this cable almost invisible. If you have dry wall, it would also be easy to just route the cable inside the wall.

And last but not least this television offers the so-called ART-Mode. Here the TV displays professional artworks from famous painters and photographer. You can select what kind of border you want as well for even better immersion. Furthermore, the TV adjusts the brightness regarding the brightness of the room. Just be aware, there is only a very limit selection for free available, but you can sign up for a monthly subscription. I just would suggest putting your own pictures in the art mode. Of course, thats free of charge. When everything comes together, the result, in my opinion, is really great. Especially when art mode is activated, the TV just blends way better into the living room than any other TV I have ever seen with my own eyes. You probably couldn’t fool everyone by saying that they are looking at an ordinary artwork, but I would say it comes pretty close. And having all the cables and ports packed away is a huge plus for me. You also can buy additional frames for your frame (ha!) if you want to customize it. These frames clip to the TV via magnets.

Im going to be honest right from the start. You do not get the best image quality for the price. Don’t get my wrong. The Frame offers a gorgeous 4k screen. The contrast is very high, the colors a vivid but still really accurate. To precise, the contast raio is about 8000:1, which is just an awesome result. That also means that the black levels are really black, but of course far from OLED-Levels. The viewing angles are just okay. Thanks to the high brightness of about 550 nits glare is not really an issue, even if your room is quite bright. But still, for that much money, you would get a higher rated model from Samsung or other brands. 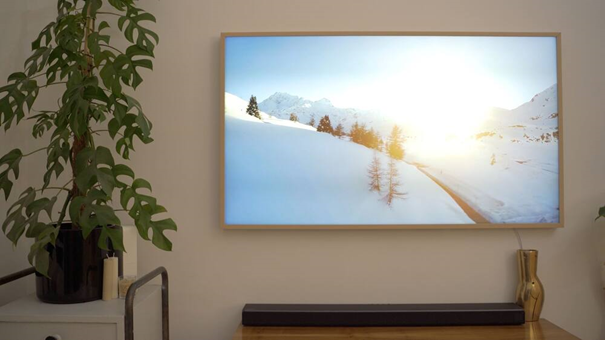 You not only pay extra for the beautiful looking design, but also for the included One-Connectbox and the NoGapWallmount. For example, the TV does not offer any local dimming, so the HDR experience is by far not as good as it could be for the price. You just have to ask yourself, how much the design is worth to you.

The Samsung One Connect box offers a decent amount of ports. You get four HDMI ports, one of which is HDMI 2.1. Furthermore, it offers two USB ports, a ethernet port, digital audio out, Bluetooth, Wi-Fi, and a TV Tuner. The HDMI 3 Port supports the new eARC protocol. For some reason, the USB ports only offer 2.0 speeds. The HDMI 2.1 is listed as supporting 4k at 120HZ at a 10bit with a 4:4:4 chroma sub sampling. For some reason, this is still a little bit buggy in combination with the PS5 (XSX seems to work fine), as it wont work with HDR when you are trying to play a Game at 4K with 120Hz. But Samsung seems to be working on an Update. I don’t own any precise mesuarement tools to measure input lag, so im refearing to the great and detailed review of RTINGS.com. There they mention that the input lag is amazing. Its very low in Game Mode or PC Mode. Even while using a 10bit HDR signal the input lag is still very low. I played quite a lot of Rocket League on my PC, and was quite suprised how nice it felt playing on the Frame.

Thanks to the low input lag, 120Hz Panel and HDMI 2.1 this TV is just awesome in terms of gaming. Doesn’t matter if you use a PC, a next gen console or even an older model.

Over the last couple of years, I got to experience a lot of different TV operating systems so far, but I have never used Tizen OS before which Samsung uses on this TV. Compared to my experiences with AndroidTV or my FireTV stick, this operating system is really snappy. After some time, I always felt that, especially AndroidTV starts to get laggy over time. So far I haven’t had any issues with this one. Its easy to use, and even people that are not tech savvy will find everything they need quite fast. TizenOS also comes with its own app store, and you will find all your typical stuff there like Netflix, Disney+, Plex and so own. Still, the store doesn’t offer the wide range of different apps as the AndroidTV store. I got all the apps I needed though, like SteamLink and also the app of my local Austrian TV broadcaster. Your mileage may vary though. So just leave a comment if you want to know if a certain app is available. 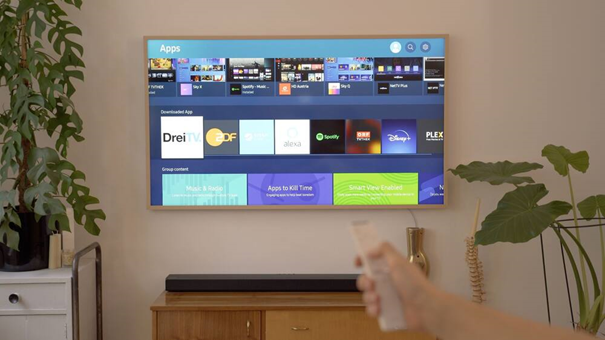 The remote feels really nice. Its pleasant to use because it doesn’t have that many buttons, so you will find the right button blindly. You get your four cursor buttons with a big center button in the middle. You got a volume rocker which also functions as a mute button and an additional channel rocker. There is one dedicated button for voice commands which you can use if you into that sort of thing. There is also a dedicated Netflix, an Amazon Prime and a RakutenTV button. I could imagine that, depending on the region, these buttons could be different. Even though I like the simple design, I think that a few extra buttons would have been nice. I don’t understand that there is no dedicated fast forward / backward button. It just doesn’t feel that intuitive to do that with the cursor buttons. I also would prefer to have a menu button that always shows up the context menu in a certain situation.

The sound quality of the build in speakers is really decent. That’s probably due to the fact that the TV is a little bit thicker than other modern TVs. It get quite loud, the highs sound clear, but of course the TV lacks in terms of bass. If you not a audiophile person, you probably are just fine with the build in speakers. But even a generic soundbar will enhance your listing experience. In my review video on YouTube there is a short audio comparision at the 8 minute mark. Design first, everything else second would be a fitting headline for this television. It’s just so obvious that Samsung but a lot of thought into designing a nice looking television It’s not just the look of the hardware but also the software. Art mode helps to blend in the television way more than I would have expected. Luckily, the picture quality also doesn’t fall short, you still get an amazing contrast ratio, the brightness levels are also impressive. The HDR experience is, compared to the price, by far not the best that you could get, but other than that I never thought that I am missing out on anything. Tizen OS is snappy, and all the apps that I need are in the store and work flawless. The OneConnectbox makes cable management so easy and tiddy. You need to decide for yourself how important design is for you and if you want to pay a little bit extra for it.

If you have any questions regarding this TV just hit me up and leave a comment. I hope you enjoyed this little review. I will probably go play a bit PS5 now :D