Many believe the blockchain technology to be an extension of the internet that powers decentralized value and distributed ledger, while others believe it is a revolution in the way transactions are being managed, transmitted and stored. While both may have correlations within each other, the truth is blockchain technology is so young that to say only one definition fits all will be an aberration as more information about this technology is discovered everyday.

In the advent of Blockchain as it relates to the provision of solutions to the world of information/data decentralization and the way transactions are being distributed and verified across several computers acting as nodes, we've come to realize that solutions are never enough and problems never finish.

However, one of the prevalent importance of Blockchain technology is to provide a secure system for transactions, prevent double spending, offer transparency e.t.c carried out by nodes that run the network in a decentralized space, the more nodes operate on the network, the more secure/decentralized it gets.

Before a node can participate in the network, it must download the entire blockchain and verify every single transaction ever created.

As time goes on and transactions begin to get more complex in size and data type, nodes will begin to run into difficulties when downloading the entire chain, nodes which can pull through might take quite a long time to download the chain, while nodes powerful enough to do so seamlessly will be few, resulting in centralization of the chain.

This led to the creation of the PascalCoin Project. To solve this shortcoming, PASCALCOIN invented the Safe Box. Safe Box is a cryptographic data structure that stores account balances independently from the blockchain which is in contrast to storing the entire ledger. Think of the Safe Box as an automated storage space that synchronize data from the blockchain but updates itself with only the relevant data.

So the blockchain is only used to update the SafeBox before being deleted, this makes it super easy and fast for nodes to synchronize blocks as only the last 100 blocks are needed while also assuring security through the blockchain. 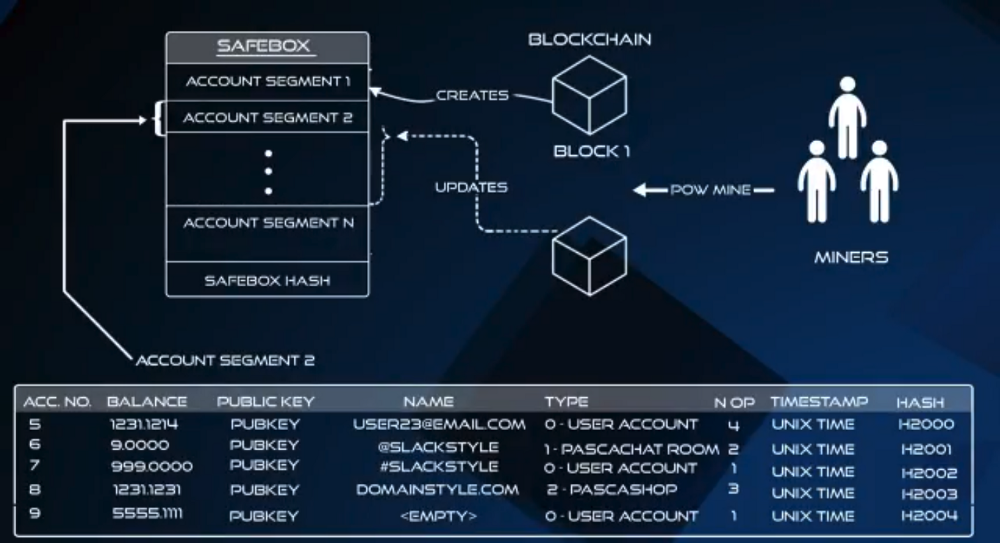 Since only the previous 100 blocks are needed to be processed by nodes, Pascal Coin gains the ability to scale infinitely unlike other chains that store the entire transaction/block history.

PascalCoin is characterized by its simple to use wallet address in form of short account numbers which are easy to memorize and can also be tied to names, emails and company names, PascalCoin's architecture also facilitates the creation of second layer protocols for powering applications and smart contracts.

PascalCoin is a POW community coin that was launched in 2016 and has been through continuous developments and improvements, currently in version 5 of a well detailed and updated roadmap.

Pascal accounts or PASA's are created on the network when new blocks are mined and added to the chain, they are rewarded to miners to prevent abuse and spam from bad actors. To receive Pascal coins or use the SafeBox, one needs a Pasacal account which can be gotten from mining, purchasing or obtaining one from a free service such as Freepasa.org.

With zero fees, nearly instantaneous transactions and infinite scaling ability through the SafeBox, PascalCoin is aimed at revolutionalizing the world of blockchain in a way that hasn't been seen before.

One of the interesting features of the PascalCoin is the Blaise wallet which is extremely user friendly and easy to set up, it is available in both IOS and Android on the Google Play and App Store, With Blaise, you can easily manage your operations. Send Pascal, change your account name, list your account for sale or transfer your account.

In conclusion, the most fun part of the PascalCoin is the POW mining algorithm which is both GPU and CPU friendly, this gives people with either systems the opportunity to participate in the mining and active contribution to the Blockchain which inturn provides a better economic solution to the cryptocurrency price instability. PascalCoin developers also created the RandomHash protocol to level the playing ground between GPU/ASIC miners and CPU miners.

With the major cause of the mining issues being the ability of GPU miners who mine other memory-hard to mine Pascal which requires lesser computational power and being GPU friendly; the RandomHash protocol was developed to ward off the effects of GPU miners and shift the mining power to the CPU miners while also ensuring that mining can be actively done by numerous miners independently.

To read more about The RandomHash mining protocol, click here.

With rate of projects unheard of suddenly becoming a success, I would say this is one to watch plus its got a good use case behind it.

Blockchain technology is getting more advanced by the day really, never seen anything like Pascal's Coin

Never have I oh, until few days ago...interesting thing is that it was written in Pascal programming language....very unique stuff

Hi @mistakili
This is an interesting project, sounds like a good product. Do you know if it is a HardFork of Bitcoin or another chains code? I see you say it was written in Pascal code language, is that unique from other blockchains? Does it conver benefits? Thanks

Thanks for your feedback...

I'm not sure if it is a fork at all,...and recently the entire code was rewritten in golang, perhaps to make it attractive to more developers and easy to develop with. Here is a graphical rep of what golang looks like in respect to blockchain