julianhorack in LeoFinance • 7 months ago

In my day trading experience, I prefer to pay attention to just one specific pair and trade that back and forth. We all need to find a specific style that suits us and our personality. In this way day trading or any trading is unique to your temperament and lifestyle. That’s why my strategies and style may not be suited to you and vice versa. We each need to find what works for us by spending time practicing what we learn as we go along until a style emerges that works for us. 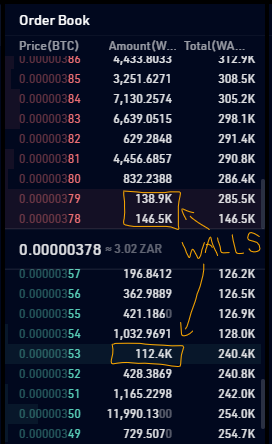 My current day trading style this year is to focus on just one pair that I have found to be very volatile and thus I’m able to make scalps or small profits from numerous buy and sell trades daily, based on that volatility. The cryptocurrency pair that I trade is nothing special, it’s just one of the small altcoins out of thousands, and it’s found on a lesser known exchange. So you don’t need to find the hottest or most fundamentally valuable coin since this is not long term investing. It’s the opposite – quick in and out trading in order to accumulate more bitcoin. The goal is not to make more fiat, or use stable coins like USDT, USDC, etc to accumulate more dollar profits. The goal is to accumulate more bitcoin stack.

So I’m trading a chart pattern setup that allows me to accumulate bitcoin sats. It’s pure technical analysis, and it’s the pattern of this particular chart that I like, not the altcoin itself. When I see big spikes on the hourly or even 15 minute candles, it’s those spikes that I’m catching. If there is a repeated and regular pattern in the price action, like noticeable support and resistance levels between which price repeatedly bounces, then that’s what I aim to trade.

Perhaps it’s easier to find this kind of pattern in the chart of a small cap coin, where the price is easier to manipulate by whales, or big buy and sell orders. I simply ride the waves caused by the whales. One challenge I have found in this particular price action and altcoin, is those very whales themselves and their massive buy or sell orders, which can be called walls in the order book.

The order book is the list of buys and sells waiting to be filled which we see on the exchange. It shows you how many coins are being put up for sale or buy at each and every price level, one sat at a time, all the way up the ladder. Generally in my trading I will see a few hundred or a few thousand coins for sale at each level on the price ladder. But then I will see a massive buy order of 150k or something out of the norm sitting there in the order book at a certain price. And it acts like a wall in the price, since that trader is selling or buying such a massive order, that it stops the price from going beyond that level, thus acting as a wall.

Savvy traders see these walls and place their trade order just before the wall, so that when price reaches that level, their order gets filled just before it hits the wall. In this way I can use the wall as a point of support or resistance in price movement. The wall could be several orders all looking to trade at that price because it is a naturally obvious place of previous support or resistance, or is perhaps a fibonacci retracement level. But often it is just one whale aiming to sell hundreds of thousands of coins or sats worth, like a big fish in a small pond of little traders with their few hundred each. So that massive trade order sticks out.

And day traders see that wall and set up their trades just ahead of it, as I say, but it’s not as simple as that. Sometimes the wall moves. This could possibly be what is termed spoofing, or price manipulation, which we hear about in trading. It’s especially prevalent in these small cap coins with low volume. And it is one of the risks of trading these coins. The whale places his or her order and it sits there like a wall. Other traders pile up their trades just before the wall, and you see them one or two sats ahead of it, accumulating by the thousands. But then the whale removes their trade order as price comes close.

So your order which was just ahead of it gets filled but the price just continues way past what you thought was going to be resistance at that wall. And so you end up buying or selling at a worse potential price because the wall was removed. This is very technical of course, but traders will understand, and if you are really able to focus on the details, then you will benefit from this educational insight based on personal experience. If you are watching your trade like a hawk or sniper all the time, then you can see the whale remove their wall of an order and shift it just a few sats further up or down the order book. Sometimes it pops up and disappears multiple times, and then you know it’s a single whale moving their trade order around.

Now in one sense this is fine but it can be tricky to keep up with. You may not be watching the exchange constantly, since you have set your order and are busy doing other things, like writing or researching. You think your order is well placed just before the wall and you’re waiting for the trade to fill, but in the mean time the whale has moved the wall either ahead of yours so that your trade is not executed, or much further behind yours, so that your trade is still executed but price just keeps going toward the newly placed wall further away.

In certain instances this is called spoofing, or setting fake trade orders which you never intend to have filled, with the intention of deliberately manipulating the price. And it’s illegal. It falls under the crime of price manipulation. Now I’m not going to say when a tactic becomes an illegal act. But it is one of the dangers or pitfalls that an aspiring day trader needs to look out for. There are always bigger traders with larger bags and more experience than you, who are a step ahead. We need to be seriously vigilant, which is why it’s called trading like a sniper.