amestyj in STEMGeeks • 3 months ago (edited)
Dear readers, we have been developing a thematic series called glossary of agroecological terms, this time we continue to socialize terminology related to the agricultural field, but specifically in the area of forage farming, taking into account that in livestock ecosystems the main crops are grasses and other plant species that provide bovine animals with the nutrients necessary for their growth and development. These terms will surely be able to clarify some doubts about forage crops that are sometimes considered worthless plants and, in addition, terms related to agronomic management that must be implemented to obtain the best yields from them. 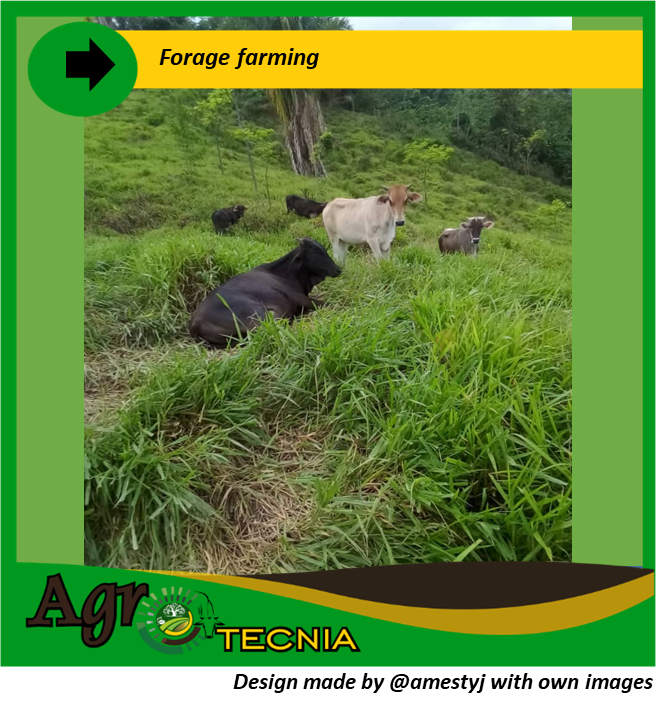 Before starting with the description, it is important to clarify that they were not ordered alphabetically, but from what we consider the most basic to cover various aspects related to the management of pastures.

Without further ado let's get started!

- Grass: when you want to describe grass, the first thing to indicate is that we are referring to a plant that is consumed by ruminant animals, which belongs to the family of the poaceae and provides animals with adequate levels of protein and fiber if managed efficiently. On the other hand, said plant has the ability to regrow after being consumed by animals, they accumulate carbohydrate reserves in their roots and lower part of the stem, after cutting these reserves together with the photosynthetic process that they perform with the vegetative parts that were not consumed by the animal help the meristems that are points of plant growth make a vigorous regrowth and in the course of a few days they are ready to be consumed again by ruminants.
- Forages: forage is called all plant food that is supplied to animals either fresh directly in the cowgirls or preserved to be supplied in critical times, it is important not to confuse the term grass with forage, because grass is considered fodder after it is cut to supply it to the animal. 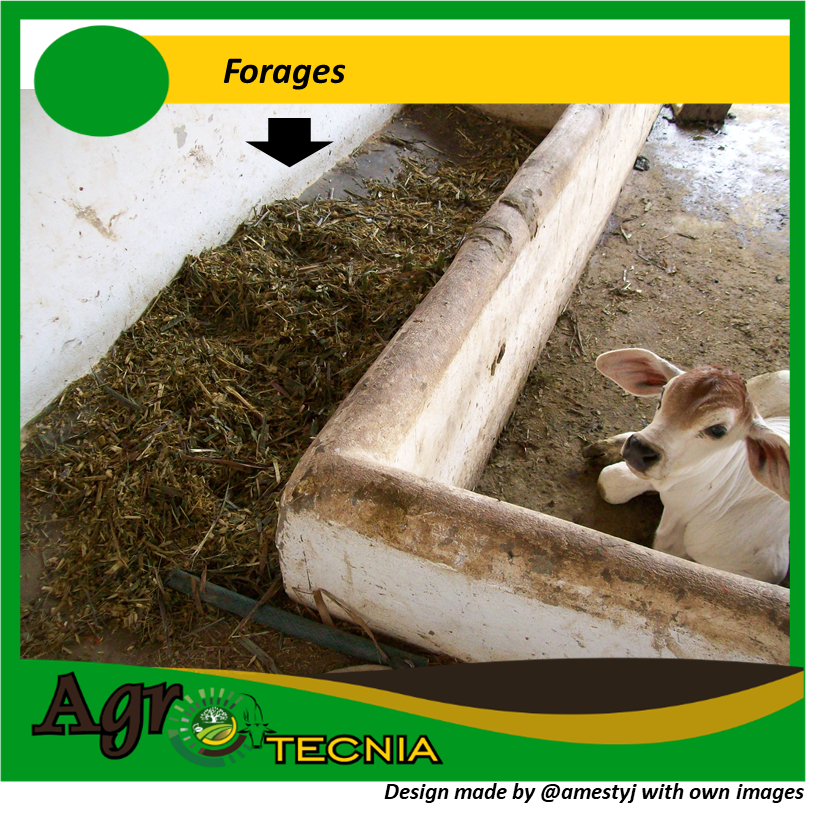 In that sense, grass can be considered fodder after being cut, the leaves of plants such as legumes and any fruit that is supplied to the animal as part of its diet from plant resources.
- Load capacity: in livestock systems there is talk of load capacity to refer to the number of animal units that can support a forage hectare, for this, it is important to implement samples of pastures to determine the dry matter yield they have, from there it is determined that pasture supply to each animal unit and automatically it will be obtained what is the animal load (number of animal units per hectare), in this way an animal management will be carried out on the prairies, without the grasslands being affected by overgrazing. Design made by @amestyj with vector image of cows taken fromPIXABAY
- Overgrazing: the term overgrazing refers to the excessive consumption of grass by animals on a given surface, this can happen when the days of occupation that the animals will have on the surface are not determined, if they remain for a long time on a surface they can affect the meristems of the plants consuming almost entirely what would limit the regrowth of the grass and if this situation persists over time it can cause degradation of pastures, observing spaces without forage cover. 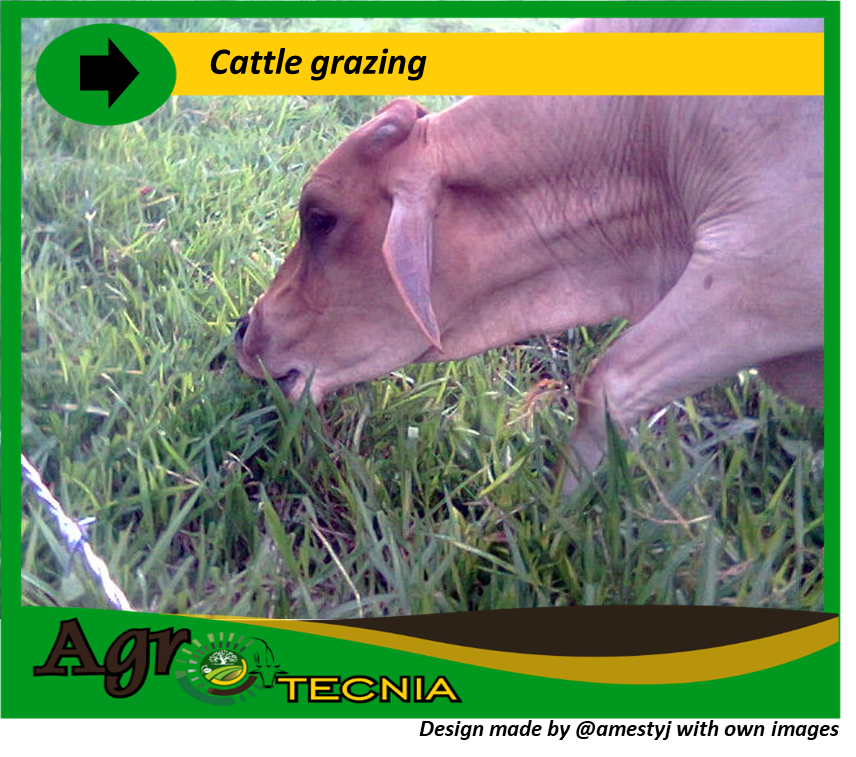 Similarly, overgrazing can be generated when the animal load is not adjusted, as mentioned above, that is, the yield of the pasture is not estimated and a greater number of animal units are placed than the forage surface could support, causing in the medium term the degradation of the pasture.
- Rotation of paddocks or meadow: when talking about rotation of paddocks it refers to changing the animals from one paddock to another, this is done with the intention of giving the days of rest that the pastures need, for example, if the pastures need 35 days of rest and the animals graze 1 day in each paddock, then 35 paddocks will be needed. Design made by @amestyj with vector image of cows taken fromPIXABAY
Of course, for this, the number of animal units that can be managed per hectare must be known to determine the size of the area that will be used to manage the animals, it is important to emphasize that generally in the geographical area of the south of Lake Maracaibo Venezuela the animals are divided into batches and the cows in production are managed in an exclusive module for them, with the intention of providing them with quality pastures for maintenance and production.
Dear readers, we hope that the terminology described will be useful to all of you, there are a lot of terms that can be described in other publications. As can be seen, pastures are the fundamental link for a livestock system to be profitable, the management of the animals in the paddocks is carried out based on the fact that they do not cause the degradation of the plants and to be able to take advantage of them for a long period, which guarantees a better cost benefit for the livestock company.

Until a next delivery! I hope you had a nice summer. I just reconnected, and found out about this dictionary (although I have the impression this is not the first part of it). It is quite instructive to read about those terms. I must said that this proved that a few misconceptions were included in my knowledge (but that may be language-related as English is not my mother tongue).

Have a nice week!

Hello my dear friend @lemouth, I hope you have enjoyed your holidays apart from being able to rest which is primordial to be able to continue with our duties. It is not the first glossary of terms that I have shared, but I came up with that idea to be able to make clear in a simple way the meaning of some words in the agricultural field and also explain why it is applied.

Thank you for your visit, have a great week.

This dictionary is definitely a great idea! I will follow it up!

On my side, my holidays were wonderful and very relaxing. A lot of outdoor activities, together with a few city trips (I just wrote a post about them, if you are interested in a few pictures and some news).

Have a wonderful week too!

Good morning dear @lemouth, glad you managed to distract yourself a bit, I'm going to visit your blog to read about your experience.

Thanks for passing by my blog... in advance ;)