erh.germany in #science • 10 months ago (edited)

Today I want to tell you about a folk called "OruKami".

Their culture, as can be read in the scriptures, was such that they knew how to flatter the senses like no others, give your eyes a beautiful sight, satisfy your craving for the pleasing and uplifting.

They have been exceedingly clever in seizing creatures from the woods, the rivers and the skies and turning them into figurines. 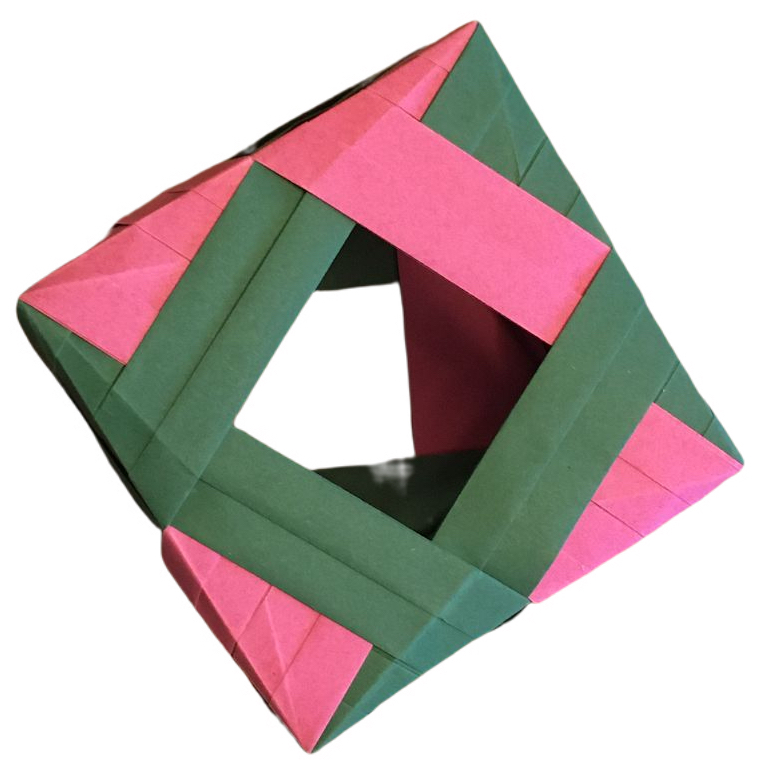 Let's see how my journey with the OruKami began.

I like to occupy my mind and my fingers equally with shapes, colours and materials that are aesthetic to me. I am a true OruKami when it comes to beauty, sensuality and pleasure. So I guess, I might be a very distant relative to these ancient peoples ;-)

I spend many hours forming a garment from fabric, imitating nature from paper, seeing a story in my mind, succumbing to nostalgic feelings, building a fantasy world. I love touching these things, taking in their smell, the texture of the surfaces, the sounds that are made when you cut something, fold it, put it together. An image of the ancient OruKami, depicted being on a pilgrimage

Ink and watercolor, when they hit the surface of the paper, how the fluids melt together and follow your plan, but also do their own thing, unpredicted. Here, I break sometimes with the OruKami tradition of perfectionism (sorry, ancestors).

When it crackles, crinkles, is smoothed or ironed hot, or sharpened, when it smells, glides through my fingers, such are my sensory pleasures.

is the modern term for the Japanese words "oru" (to fold) and "kami" (paper).

When boredom drives you out the house

My interest for this art started in the childhood years of my son. We visited the local ethnological museum one boring Sunday, which was open a few afternoons out of turn to give parents and their children a bit of a break. When we arrived that day, we found a huge table where people were sitting and folding papers. Some of the tutors were very talented and I learned to fold an aeroplane there for the first time, which actually flew really well.

Left to right: An X-Wing from behind, an OruKami dog, a spaceship or flower, difficult to tell.

From that day on, I gradually became obsessed with folding papers. It all started with simple flying models and then progressed to animals, flowers, stars and small boxes. I found and still find it difficult to bring perfect shapes to completion, because origami requires you to work very neatly and tidily, it calls for an incredible amount of patience not to rush, but above all because a certain geometric spatial thinking is not inherent in me and I find the mathematical principles behind it difficult to access. As with everything, however, practice makes the difference. After folding what felt like millions of little immature creatures and creepy-crawlies, one day I managed to make my own creation of a quite excellent beetle, of which I was really very proud.
Though it's lost in space and I don't know where to look for it, sadly. I did not make a pattern for it, as it was an act of spontaneity. It remains a one in a lifetime accomplishment.

Equally eagerly, my son produced spaceships that looked more and more adventurous, like a structure with an awful lot of niches and openings, wings and under-wings, a very complicated machine. 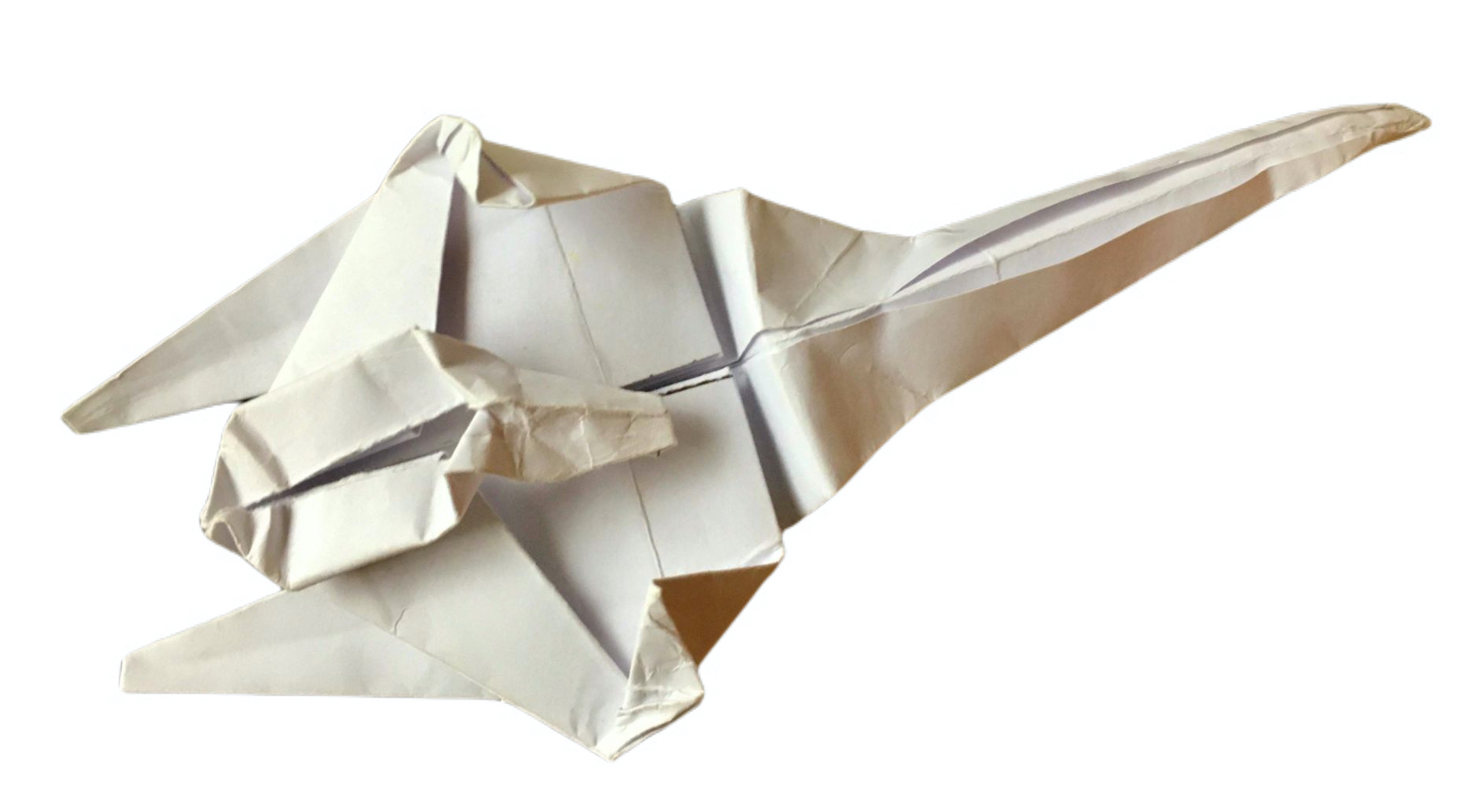 Kids are very permissive about how neatly they fold the paper. I was fascinated by how yet out of this freedom of action, the shapes captivated the eye.

I discovered my passion for little boomerangs, which, if you learned to throw them correctly, would actually come back to you.

It's downright terrifying to fold them so that they can fly too! The nitpicking in the making has frustrated me greatly time and time again! Afterwards I painted them in all sorts of colours and patterns, having something like Indian totems in mind. In the high phases I must have had ten or fifteen pieces flying around. Crawlers parade, climbing up to where they believe the mountains are - crab, totally lost though ...

All the while, I was squinting with one eye at the origami constructions made from modules, which I hardly dared to start. Until one day I was ready and tackled them.

Granted, it is still easier to put modules together than to create a flower blossom of extraordinary beauty and depth from a single sheet of paper. That, I would think, is the supreme discipline.

Here you can see the result of one of the difficult modular ones:

Not to worry, a full picture of the same model follows below.

I half-broke my fingers, cursed, angrily tore misshaped modules apart, but finally I produced some well shaped forms. The first one I made, what was called "Firworks" in the explanatory video. A shape consisting of twelve individual modules, which at first looks like a concertina and where the dexterity is to interlock the last and first module from this row in such a way that the circular shape is created.

If the paper is touched too often, it gets damp from the sweat of your fingers and then it's not possible to interlock the parts.

What you see here, is called a "Decahedron" by the person, who uploaded this Folding Tutorial 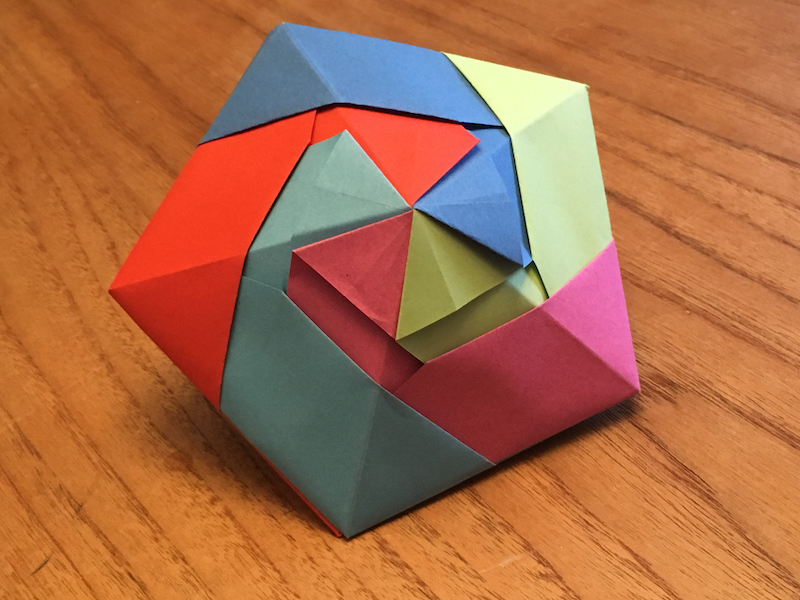 The result of long winter hours, spent under the warm lights in the former dining room of my mom's house. 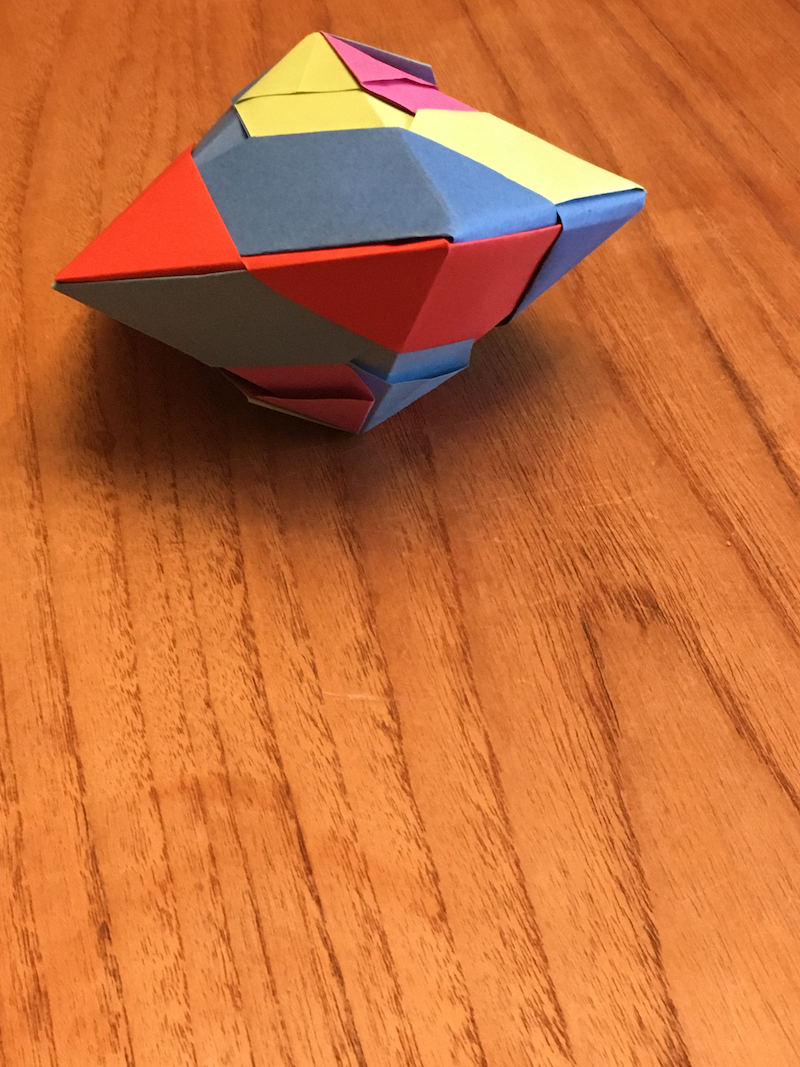 Reminiscent of a spinning top
I am not sure whether the designation is correct.

Modular origami almost always means polyhedral or geometric modular origami, although there are some modulars that have nothing to do with geometry or polyhedra. Above you can see several modules partially joined together, which in the final result give this shape: 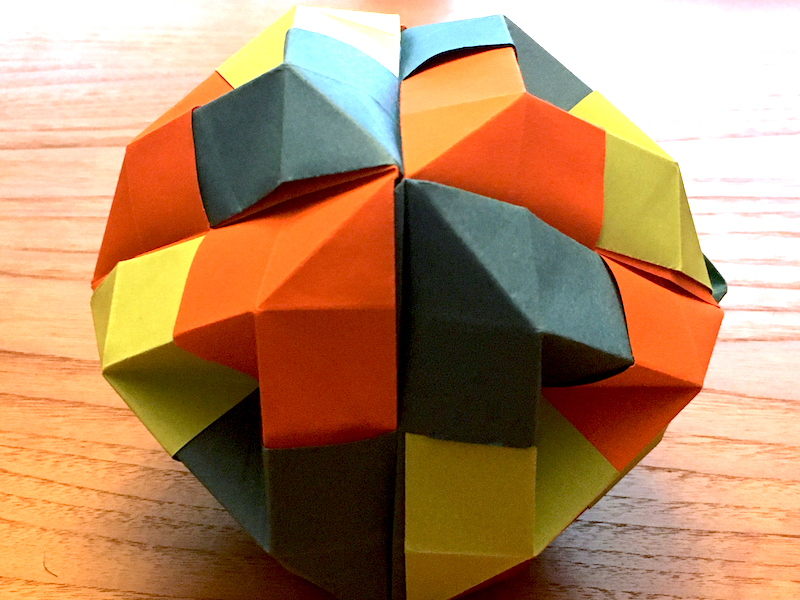 I haven't found the tutorial that I used to assemble this form!

Not knowing the correct geometric name, bothers me a bit, but looking at the platonic solids, I would say it's an Octahedron.

What do you mathematicians think?

... for every model there is an underlying polyhedron. It could be based on the Platonic or Archimedean solids ... , some of which have been with us since the BC period, or it could be based on prisms, antiprisms, Kepler-Poinsot solids, Johnson’s Solids, rhombohedra, or even irregular polyhedra. The most referenced polyhedra for origami constructions are undoubtedly the five Platonic solids.

From the artist's point of view, I would say that it is stucco work that gives the otherwise flat sides of this double pyramid their beautiful decoration. But of course this does not satisfy a mathematician's heart.

The fascinating thing about origami

is that you don't just stick something physical on top of something flat or cut into it, but that the given matter is folded into and out of itself, and somewhere I read something about this, that the universe can also be seen as a spatiotemporal folded-into-one-another universe, and that the many folds hold their mystery. 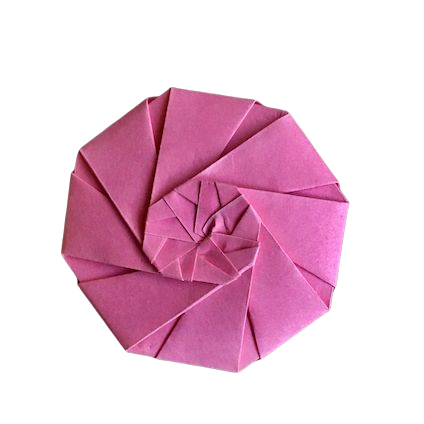 I hope you enjoyed this blogpost, which was mostly meant for your edification, a visual treat and a wee bit of amusement.

All the pictures are results of the photographs I took of the origami work I made myself. For the purposes of publication, I have cropped some and changed the colour.

How magnificent and playfully this is. It certainly requires high levels of visualization to imagine and conceptualize the angular folds into a cohesive geometrical whole. It's delicate artistic work too. A joyous mix of art and engineering. Love it ☺️

Thank you, I'm pleased to hear that.

Yes, such imagination must have led people to make a figure out of a simple piece of paper. I would never have thought that such a thing was possible. At the time when I practised origami very intensively and regularly, I noticed that mastering some basic principles produced certain results. There are, of course, compelling paths in origami, depending on which basic pattern one follows. However, from this basic pattern, you can really create a lot of different forms. May I ask if you have a favourite of the shapes shown?

This is quite an art, and all the pieces are impressive. The artist/designer in me is partial to the colorful modular shapes. The clean lines of the whole shape made up of smaller lines is very aesthetically pleasing. The engineer in me enjoys the spatial complexity of the jewellery box that encapsulates spatial principles that are both mechanical and organic. And the little boy in me rejoices at the sight of the x-wing, the dog, and the spaceship. I imagine it's very challenging to build them.

:) the engineer in you will like the inside of the box: 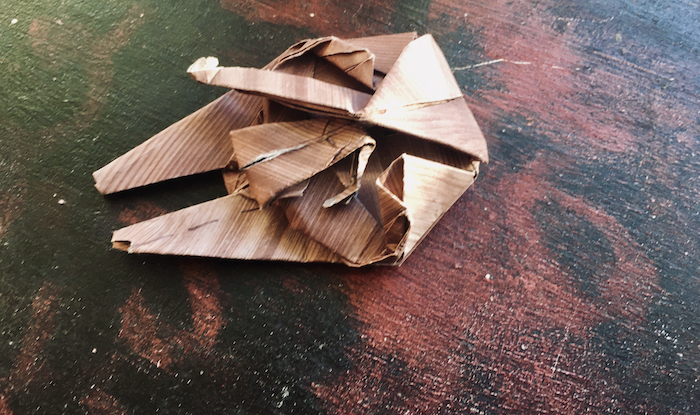 Yeah, you're right, it's a challenge. But a fun one. Have you ever tried origami?

Wonderful box. It's great to see that your son joined you as well. I've never tried origami, but love the Japanese sense of aesthetics.

I love this Origami/Oru Kami post, and I learned some new things here as well regarding the origins.

My fascination with origami is probably due to this ingrained fascination I have with geometry, and although there's a lot of math involved with these shapes and patterns that are so consistent in nature, I think it's a visual appeal the does it for me, similarly with your fascination.

that the universe can also be seen as a spatiotemporal folded-into-one-another universe, and that the many folds hold their mystery.

This is a very interesting concept. It makes me imagine the universe looking something like a kaleidoscope of fractals, and to me it also makes sense that this would be the case due to the vibrating fractal formations in nature.

You are quite skilled at creating origami, and pushing through the frustrating moments when you were following the tutorials with sweating fingers shows just how much determination you have. You are a natural when it comes to creative things involving the hands. I can't wait to see more of your sewing soon too!

Thank you, my friend.
I'm rejoicing that you share my fascination. I would love to know where I read the part about the universe folding in on itself, but unfortunately I forgot. A very interesting hint from you about fractals that could point to it :)

As for the sewing, I'm sure I'll do another blogpost, I just always fail to photo-document it while I'm busy sewing. I recently set up a little sewing station at home, so I finally don't have to take the dining table and keep putting my work away. This is a great gain, although the space in the room suffers somewhat as a result.

Sincere greetings to you!