"In Venter’s autobiography, Life Decoded, he describes his early life as a rebel, a pyromaniac, an ADHD, and an academic failure who “willed himself” to a Ph.D. and a scientific career, after the horrors of Vietnam. He says he is an atheist.
A very detailed biography can be found here:
https://www.famousscientists.org/craig-venter/ 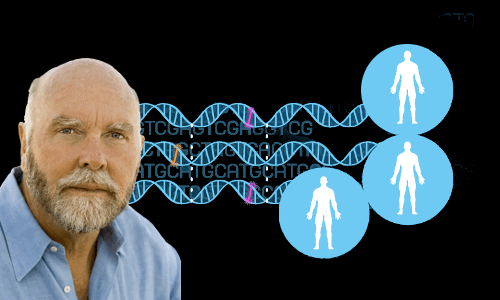 Many of his traits were written in his DNA, Venter believes, which happens to be the first DNA ever completely sequenced by man (by Venter himself) during the Human Genome project. Venter’s full DNA sequence, the first such signature in history, is attached to his book, as if inviting future readers to clone the author in case they miss the book’s gist.

The gist goes like this:
Humans are composed of 100 trillion cells which organise themselves according to the “software of life,” a DNA packet that fits onto a thumb-sized USB drive and contains 23,000 genes scattered among 46 chromosomes. Inside the genes lie simple three-letter codes that tell amino acids to fold into proteins in a particular way. If you learn how to work this software, you become God.
“If you change the software, you change the species,” as Venter likes to point out." ~ Extract from: https://www.honeycolony.com/article/synthia/

At age 20, three decades before he became the most influential biotechnologist on earth, John Craig Venter, now 75, swam into the warm waters of the South China Sea to commit suicide.

He swam away from the “bullshit, the madness, and the horror” of Da Nang Navy Hospital in Vietnam, the epicentre of the Tet Offensive that led to more than 75,000 casualties in 1968. As a Navy Hospital Corpsman, Venter had seen many perish horribly. Some had no limbs; others had their guts hanging out. Human life bled away too easily but his suicide attempt ended after a mile. The presence of sharks persuaded him to turn back and save his life.

He returned to the USA with a desire to study medicine but later switched to biomedical research.

Venter began his college education at the College of San Mateo in California, and later transferred to the University of California, San Diego, where he studied under biochemist Nathan O. Kaplan. He received a BS in biochemistry in 1972 and a PhD in physiology and pharmacology in 1975 from UCSD.

After working as an associate professor, and later as full professor, at the State University of New York at Buffalo, he joined the National Institutes of Health in 1984 where he caused a firestorm of controversy over mRNA expressed in the human brain and was sacked.

He went to the private sector, Celera Genomics, from which in 2000, Venter and Francis Collins of the National Institutes of Health and U.S. Public Genome Project jointly made the announcement of the mapping of the human genome which was internationally acclaimed at the White House by Bill Clinton, Tony Blair and others.
Venter spoke at the event from the 31st minute of this video:


He was sacked from Celera in 2002 after a disagreement with a major funder.

Undaunted, Craig Venter went on to attract private funding for The Global Ocean Sampling Expedition (GOS).
https://en.wikipedia.org/wiki/Global_Ocean_Sampling_Expedition
An ocean exploration genome project with the goal of assessing the genetic diversity in marine microbial communities and to understand their role in nature's fundamental processes.

Begun as a Sargasso Sea pilot sampling project in August 2003, Venter announced the full Expedition on 4 March 2004. The project, which used Venter's personal yacht, Sorcerer II, started in Halifax, Canada, circumnavigated the globe and returned to the U.S. in January 2006.

In June 2005, Venter co-founded Synthetic Genomics, using modified microorganisms to produce clean fuels and biochemicals.
On May 10, 2007, Venter was awarded an honorary doctorate from Arizona State University and on October 24 of the same year, he received an honorary doctorate from Imperial College London. https://en.wikipedia.org/wiki/Craig_Venter
In July 2009, ExxonMobil announced a $600 million collaboration with Synthetic Genomics to research and develop next-generation biofuels.

In May 2010, a team of scientists led by Venter became the first to create successfully what was described as "synthetic life".
Enter Cynthia, a name for one of the many personalities of Artemis, the Greek virgin goddess of the hunt but now a name attributed to a synthetic bacterium.

The single-celled organism contains four identifiers written into its DNA to help trace its descendants. These are:

A code table for entire alphabet with punctuations
The names of 46 contributing scientists
Three quotations
The secret email address for the cell.

"Cynthia is an engineered microbe originally designed to eat oil. In fact, the oil-eating bacterium Pseudomonas putida is the creature which ushered in the whole bio-tech revolution, having been the subject of a watershed court case (Diamond vs Chakrabhati) in the Supreme Court of the United States in 1980, in which Justice Warren E Burger ruled that a living, man-made micro-organism is patentable subject matter as a ‘manufacture’ or ‘composition of matter’ within the meaning of the Patent Act of 1952. The multi-plasmid hydrocarbon-consuming Pseudomonas was the first patented organism in the world.

In its incarnation as ‘Cynthia’, designed at the J Craig Venter Institute for Synthetic Genomics corporation, the organism was loosed into the Atlantic ocean in 2011 to aid BP during their Gulf of Mexico oil rig disaster.

At first Cynthia did her job well, tearing into the oil with a fierce appetite. However, she quickly began to show a taste for the flesh of living creatures.

Reports of strange occurrences – five thousand birds falling from the sky in Arkansas, a hundred thousand dead fish coughed up by the sea in Northern Louisiana – starting appearing. One hundred and twenty BP employees who had worked on the clean-up fell sick from mystery illnesses. People who swam in the Gulf or were even caught in rain storms found themselves covered in itching sores, some of them dying in agony from internal bleeding. Cynthia reproduces rapidly within the body, and is immune to antibiotics. According to the University of the District of Columbia (UDC), up to 40% of the residents of the territories adjacent to the Gulf of Mexico have become infected with severe respiratory and skin diseases.

Soon seals, turtles and dolphins, their bodies covered in horrible skin lesions and damage to internal organs, were being found as far north as Alaska. One year after the accident, the Department of Oceanography and Coastal Sciences at Louisiana State University was finding lesions and grotesque deformities in sea life—including millions of shrimp with no eyes and crabs without eyes or claws—possibly linked to oil and dispersants. A study by the University of South Florida found that the spill and its chemical treatment had caused a “massive die-off” of microscopic organisms at the base of the food chain." ~ https://thelethaltext.me/2017/05/20/ecocide/

Words hardly exist to describe what was done but one word, brought into existence by Polly Higgins of https://www.stopecocide.earth/polly-higgin, fits the bill nicely.

Venter is currently the chief executive officer of the J. Craig Venter Institute, a non profit organisation which conducts research in synthetic biology. It has facilities in La Jolla, San Diego California and in Rockville, Maryland and employs over 200 people.
https://www.jcvi.org/about/overview#overview

He was applauded by futurist Ray Kurzweil for linking two previously diverse fields of science, represented by computer programming and the genetic programming of life by DNA sequencing in his book Life At The Speed Of Light which he explains here:

They announced the formation of Human Longevity, Inc., a company focused on extending the healthy, "high performance" human lifespan. Its goal is to build the world's most comprehensive database on human genotypes and phenotypes, and then subject it to machine learning. At the time of the announcement the company had already raised $70 million in venture financing.

Venter served as the chairman and chief executive officer (CEO) until May 2018, when he 'retired' from the business under a cloud. Human Longevity filed a lawsuit in 2018 against Venter, accusing him of stealing trade secrets. Allegations were made stating that Venter had departed with his company computer. The case was dismissed due to insufficient evidence.

That is the background. What is Mr Venter doing now?

The John Craig Venter Institute, and the University of California of San Diego are accused of running experiments on targeted individuals with bioweapons designed to modify and control the human race. Their alleged mission is to ‘forge new life forms’ and the accusing article, linked below, carries a list of

The following video is one in a long series uploaded by A Simulated Reality channel on YouTube which raises questions in respect of Covid19.
It includes material by Craig Venter.
Linking Humanity to The Sentient World


This led me to her Bitchute channel dedicated to understanding Morgellons disease which is loaded with multiple videos that may interest my readers.
https://www.bitchute.com/channel/wCy7Ld0fKA6N/

I am certain that I have only summarised the influence, work and interests of John Craig Venter and there will be more to be seen and said.
However, I will leave you to follow your own intuition and research further. I will be happy to hear from you if you do.