How 2020 changed my family life for ever.

shepz1 in #motorbikes • 2 years ago 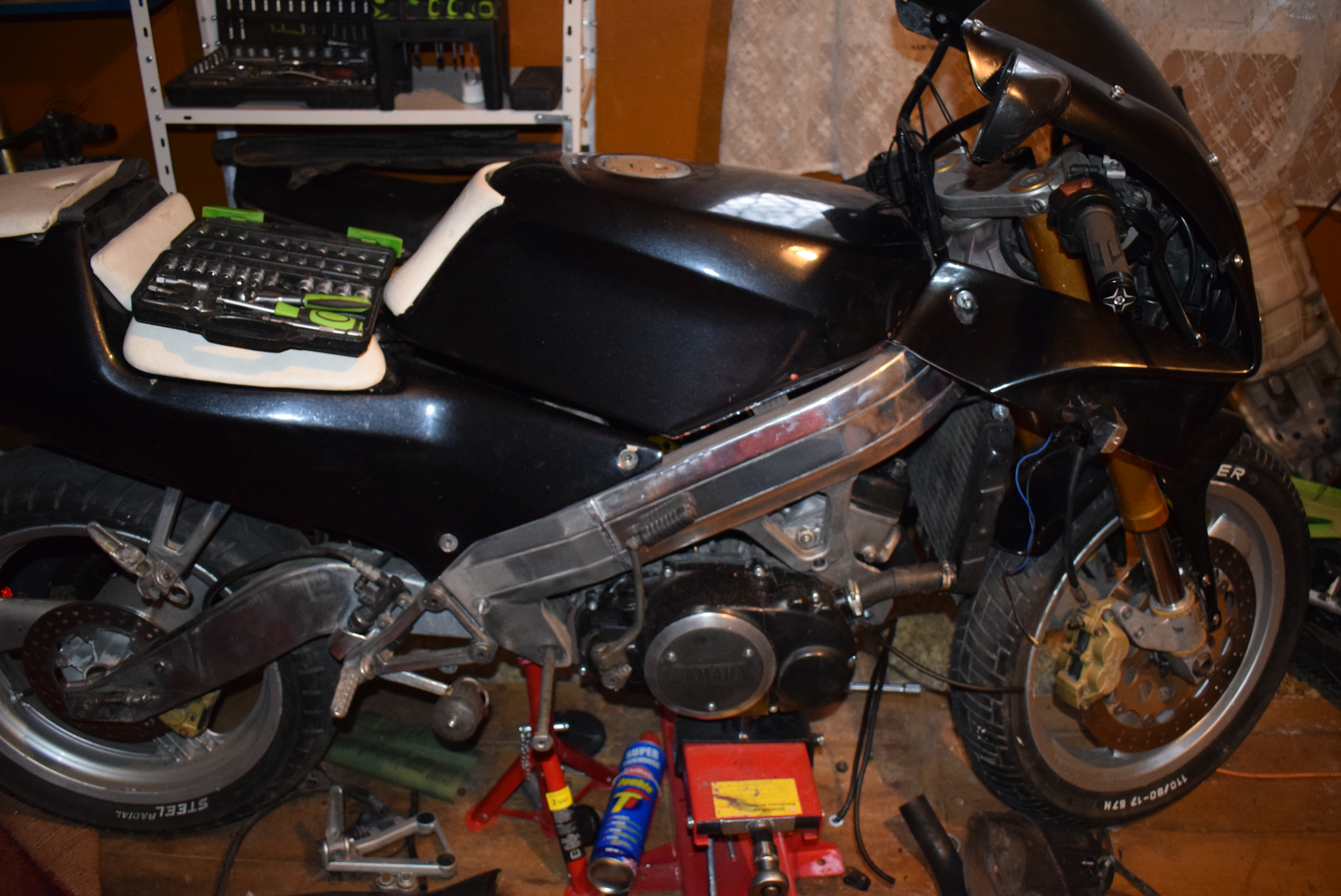 Like for most of the world it started off with "2 weeks to flatten the curve" last March ish time.
Then on and on it went, masks, no mask, masks again till now for no apparent reason.
I have never worn one and never will. My body my choice.

The children were told not to return to school in mid March until after the summer holidays. (September)
They rolled out zoom lessons like most places. And banned kids from going outside without an adult. That rule is still in place almost 1 year later. I let my daughter (9) go out when ever she wants or has a friend not brainwashed that is brave enough to swing in the park too.

She went back to school for just over a week then my partner Kate got a call from the school saying the PE teacher had a positive PCR test for the rona so Amelia and Kate (perfectly healthy) had to self isolate for 10 days. That was the breaking point for me and them.
Kate lost those days wages as she is paid to teach English & no show = no pay.

They send around police to make sure you comply so we phoned the health department and told them we are refusing visits from any government authority, and it worked.

Schools out for ever

We pulled our daughter from the state education system and I am home schooling here. Truth is since March except that one week back at indoctrination it has been me teaching her at home.
I requested all the school work she would have done in book form and they duly obliged.

Now what I have found is the amount of work she was supposed to study in a full day, she can do in under 1 hour. So what was the rest of the school day for? Who knows.

Instead of regurgitate and repeat she has now learned many life lessons she would never of had if stuck in a dingy old classroom.

Our spring project is making a 2 stroke buggy, it was going to be a gocart but farmland is more suited to the former.
I have downloaded a free CAD (freecad 0.16) software for Ubuntu and placed it in the education folder on her laptop, she now has to design it herself with minimal guidance from me except for the basic principles.
At only 9 years young she is making me very proud. Would she have been able to do this in that prison called school? Not a chance.

Many of us now

A new school opened up close by with disgruntled parents like us. They applied and were granted a license to teach either static or from home. Amelia is enrolled so as to not have to attend the other school system. It is a fully hands off school that leaves the education to the parents with only end of year exams.
We can also choose the exams we want them to be tested in so ours will contain engineering. I spent over 30 years in mechanical engineering so she should have a head start.

Life and the world

Since she spends so much time in adult company, she now already knows just by listening to our conversations that the WHO is a private company funded by big pharma and not a world system interested in her health.
She knows about Davos, the WEF, government crony corruption & all manner of things a 9 year old does not as a rule know. There is no helping that as children are like information sponges.

Are we bringing up a generation that knows the world inside out and can then change it? I hope so.

That is a Cagiva mito 125cc with a Yamaha rd 350 lc engine in it.
This is also a project for this season she has been working on with me.
She now knows how to use her imagination with regards to making something fit that has no right to fit.
We made our own brackets out of thick alloy. Made downpipes fit from a different bike. This week she gets to wire in a race ignition with hand held programmer to change the ignition curve. So she gets to solder, work with 2 different wiring diagrams and find a solution as to how to make it spark & run.
She does lose concentration and get angry sometimes but keeping her in the motivated zone is not so difficult.
She will also learn about heat shrink tube after soldering to learn why it is important 2 wires do not short on each other. Little lessons but for life.

Baby steps I call it. We/I condense the learning to 4 max 6 hours practical learning and the same amount of time for fun. I do try and make her laugh all the way through anything we do. Learning should be fun not just being told what to do.

Anyway enough of me, have a super Sunday, hope my footy team beats Man Utd and catch you tomorrow, comments below :-)
Enjoy the rest of the week ahead.

I love this! I wish I had homeschooled my son from the beginning, but he is now 16 and having missed the last year of schooling, now has to face the fact that he is not going to take GCSE exams, but still doesn't know how he has to get his results to be able to study plumbing at college :( Hats off to you. Homeschooling is underrated!

I love the name you have, it reminds me of politicians, no offense intended to your good self.
Getting the fragile minds out of indoctrination is a must not an option now.
I left school with no formal exams completed.
Worked in Grand prix racing worldwide. Worked as an engineer in the automotive industry for 30 plus years.
Owned my own hifi shop selling high end (expensive hifi) and owned 4 other companies.
Nothing to stop your young one doing the same. A bit of regurgitate paper to say he can means nothing.
Where there is a will dear lady there is a way.

No offence taken! ☺️ It is actually a play on words, as I am slightly obsessed with bulldogs 😜
I have every faith in my son and will help him achieve anything he wants to do, even if it means taking an unorthodox route. Sometimes, the lesser trodden path is the most rewarding. Thank you for your comment 😊
Oh and here are my beautiful bullies 😉 Them some mean dogs, but I have 3 outdoors cats, I think the cats win, well they have for 4 years on our farm so far, the biggest threat would you Adam and eve it is magpies and moles.

Hats off to you mate.
Slowly we've almost made ourselves sheep and if we do not stand up, those bastard wolves soon gonna eat us.
Ain't gonna happen!

Not happening bro, not on my watch, good to see you again you soldier you. :-)

Now what I have found is the amount of work she was supposed to study in a full day, she can do in under 1 hour. So what was the rest of the school day for?

Says every parent who takes their child out of the school system to homeschool! 😆 So much more to be learnt outside of the classroom. That school sounds promising. What's the regulation like in Poland with regards homeschooling?

I didn't realise you were back posting. Been spending more time in the real world, so not kept up on my feed. I'll jade to try and catch up with you.

That was the requirement to pull her out, she had to be with an accredited school so we all set one up. :-) Going to be meetings outside in the spring summer with all kids in the new school, they can gladly all play in our fields all day long every day for our money. :-)

Indeed and thank you kindly for the curangel part :-)

Well I see lots of positives have come out of these crazy times for your family with the way you have made the best of a crappy situation.👍

Not just us bro, many other families also. This is the end of the old indoctrination system as I see it anyway.

Sounds like you got something good out of the ridiculousness that's been going on! :D

Glass half full here. Got to make the best out of even the worst situation. Cheers new friend.

Absolute gold my friend and I wish I’d have done the same with my young girl. After junior school the education system is pretty fucked up and kids easily get disillusioned with learning due to a boring curriculum. My daughter used to be just like yours and then she started her comprehensive school and it’s been down hill from there in so many ways. It’s something I will regret but I also know she will find her path regardless because she is very clever and has the basics. Hopefully she still listens to me(but just doesn’t show it) and will learn the way the world works.

Cheers my long time friend. Missed opportunity for sure for you but hindsight is both brilliant yet cruel. I feel sure you planted enough seeds for her to be streetwise enough to work it all out.
You have put a lot of effort into raising her sometimes against all odds of being able to. One day she will look back and realise what you did to keep her safe.

hindsight is both brilliant yet cruel
It sure is, but everyday is a school day, even at our age 😉

It is going to be interesting to see what comes out of society in 15 years. 15 years after Woodstock was 1984 and tear down the walls, the 15-20 year old age group had grown up. Today's 15-20 year old group seem to be willing to be muzzled and to acquiesce to the Government wants and to Government orders.

The only real hope is from those that are 8-13 years old, and the parents of that age group, that instill a sense of common sense and decency in their children.

100% agreed, and it takes many of us to take our children into our hands and educate them about the entire world, not churn out robots like schools do.
As you say, time will tell.