amestyj in #livestock • 2 months ago (edited)
Dear readers, in previous articles some practices for the management of calves in livestock production units were described, however, they were not delved into, so in this publication we address some of them such as identification and corning. Whoever is dedicated to livestock farming should take into account that in these systems not only practices and management are implemented to pasture crops, but also to animals such as the identification that is carried out with the marking of the animal's skin with numbers or letters and in this way determine the ownership and keep production records in an orderly manner, the dehorning is also carried out in its calf stage or at any age of the animal, to facilitate management among other advantages mentioned by the producers and that will be described later in this manuscript. 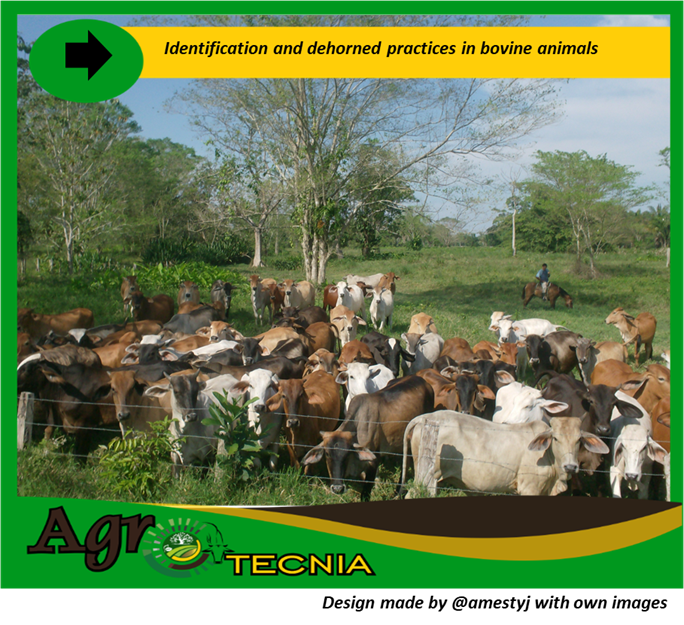 In that sense, to mark or shoe animals, a tool known vulgarly as iron is used, which is a long iron cane with a wooden handle followed by the figure that will have the mark at the time of placing it on the animal's skin, usually these irons are placed on the back of the animal.
These marks are used to indicate the producer's ownership of the animal, they are also used when the animals are sold and also to carry out some internal controls or registrations. This practice is still used by producers in our geographical area, because, although there are identification with other methods such as earrings and microchip implantation, they tend to be very expensive and medium and small producers do not have the necessary resources to implement this type of technology. On the other hand, there is the dehorned, which when performed in early stages to the calf is known as unbuttoning, which is applied when they are approximately five weeks old, this practice is implemented to avoid future accidents on the farm between animals that can cause damage to the udders, it also facilitates the transport of animals, since it decreases the possibility of damage to each other during the transfer, among other advantages. The dehorned is when the animal grows and they want to remove the horns which is a more painful practice and not recommended, the ideal from our point of view is to do the unbuttoning when the animal is small.


The practice of unbuttoning can be carried out in several ways, among the most applied is the use of caustic substances and the use of an iron scraper or topizer that is heated on fire, for the application of either of the two methods it is recommended to remove the animal hair that is around the area so that there is a better cauterization of the area. Generally, producers use dehorning with hot iron, because they consider it more practical, economical, easy to apply and more effective to cauterize, since, according to the opinion of some producers with caustic substances there is a risk that it reaches the eyes of the animal. 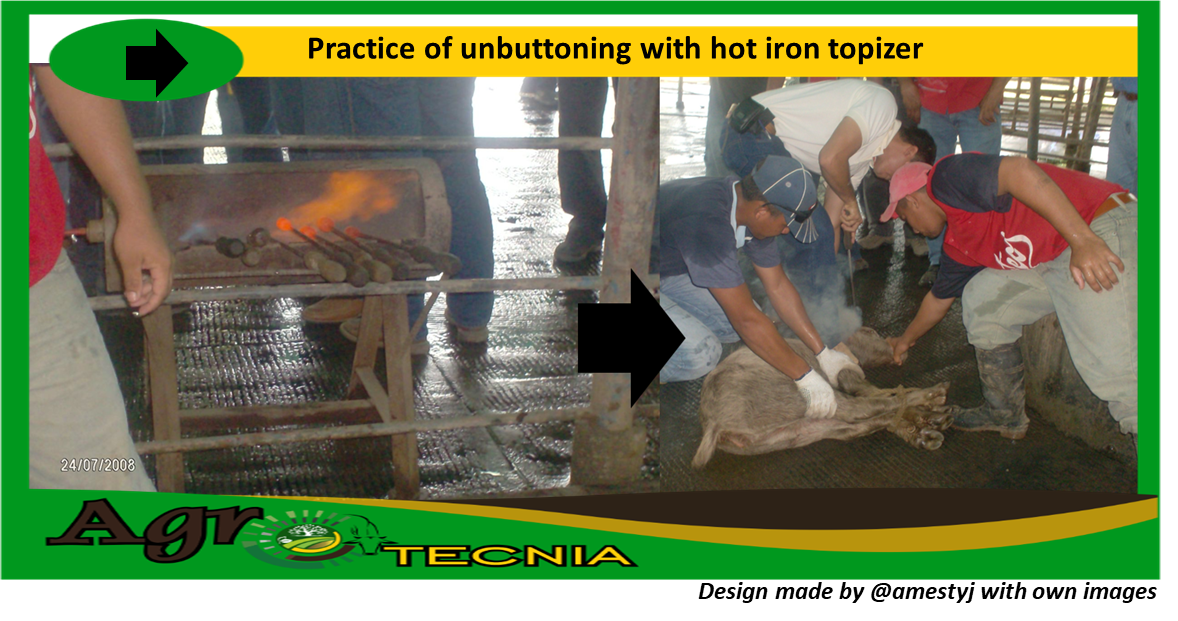 TTo carry out the unbuttoning work, after cleaning the area, the topizer is heated on a brazier until it turns red, the animal must be well held and the topizer is placed at the base of the horn outlet that has the shape of a kind of button and it will only be enough to place it once, unless the horn is well developed; to avoid the pain of this practice some veterinarians use local anesthesia.


Dear readers, without a doubt certain management techniques are rudimentary but farmers consider them efficient, although in the case of identification there are new technologies but their costs are high. On the other hand, it is necessary to be clear that when talking about dehorned, reference is made to the removal of the horn in animals of any age and when it is applied in calves it is called unbuttoning. Wow ! Is there any other alternative to that? Maybe there is an alternative solution…
!1UP

Hello dear friend @gwajnberg, the alternatives that have emerged for the identification are the microchips that are implanted in the animal and a follow-up is maintained through software, as for the dehorning is the use of caustic substances, which tends to be less painful but should be applied carefully so that it affects some other part of the animal's body.

Those are the alternatives that I have seen that have been used in my geographical region, but if the animal is allowed to grow and then it is decided to remove the horns it is more difficult and it can be more painful for the animal.