NFTs Were Predicted by Hal Finny in 1993

I came across this earlier today and it got me thinking again about who the creator of Bitcoin might be. We all know the creator is Satoshi Nakamoto, but we don't really know who that is. The fact that he's remained anonymous since the inception of bitcoin over 10 years ago is pretty mind-boggling. Despite the numerous conspiracies and educated guesses as to who might be Satoshi, no one has figured it out. I have my suspicion. So who is Hal? Well he was a computer scientist known for being the recipient of the first ever Bitcoin transaction. All this is pulled from WikiPedia. Check there if you want more information - I'm just looking at a couple things. His relation to Bitcoin is very interesting. He created the first reusable proof of work algorithm in 2004 before Bitcoin was created. Then in 2009 he just happens to be the recipient of the first ever Bitcoin transaction? He also lived in the same town as Dorian Satoshi Nakamoto, which is definitely not the creator of bitcoin. Hal suffered from ALS and posted on a Bitcoin Talk forum in 2013 that he was paralyzed but that didn't stop him from continuing his work. A year later in 2014 he died and had his body cryogenically frozen. I think Hal Finney very well could be Satoshi Nakamoto.

Even if He isn't the creator of Bitcoin, he clearly had a lot to do with it in the beginning. He used the example of "cryptographic trading cards" to explain buying and selling digital cash in his post on Compuserve.com in 1993. He was literally talking about NFTs before they were even thought about by anyone else. Well, probably at least. I wasn't born yet (born in 94) and I don't think the internet was all that popular at the time. Much less the thought of transacting with "internet money" or collecting "digital collectibles". This guy knew. He fucking knew. He clearly had a giant brain. Maybe one day he can be revived from cryogenesis to tell use about creating Bitcoin... lol

Your friendly cryptographic trading card dealer wants to join the fun, too. He'll be as interested in buying your trading cards back as in selling them. Try this fascinating and timely new hobby today!

What a crazy quote from 1993. Like can you even imagine a person 1993 trying to understand cryptocurrency or NFTs? That's like trying to tell someone that has never seen or heard of a smartphone before that you can play games on a small device that fits in your pocket. What about trying to explain video calling? Like fuck. I'm pretty young but I'm sure this was a weird time for the internet. Maybe someone can enlighten me in the comments. Anyway, I'm off to play some Gods Unchained.

NFTs are the future. You can't change my mind. This is the way.

People being ahead of their time with vision of what could be in the future happy. Take a look at Da Vinci and what he tried to invent. He was way ahead of the curve.

Very true. These great minds are the start of changing the world.

Check out the Simpson, they do predict shit too! lol

We will become NFTs bro!

The Simpsons are the fed. lol

You have been cure-rat'ed by @master.splinter - wield the #oneup wisely. 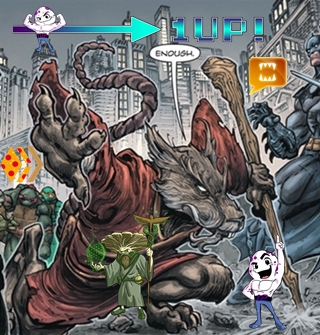