yintercept in #inktober • 3 months ago 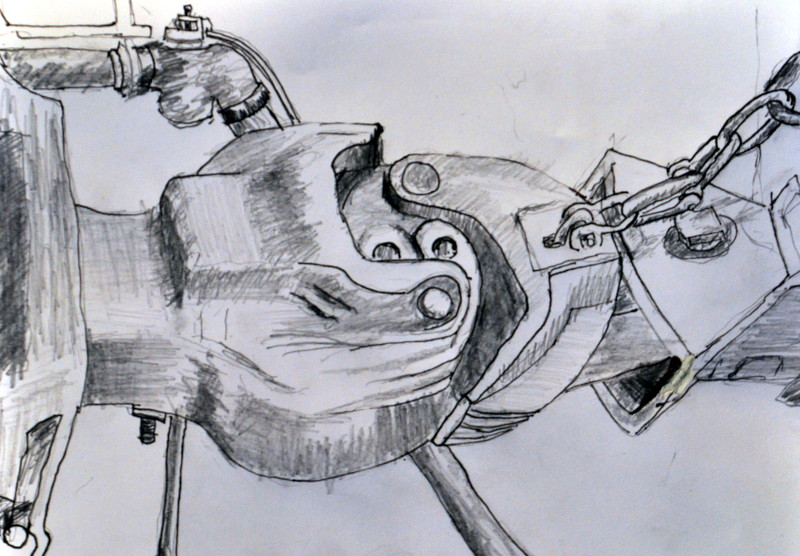 Today's #inktober prompt is "connect." So, I thought I would use it as an opportunity to research railroad couplers which are a historically important style of connector. I drew the image above based on this picture of a coupler from Wikipedia shown below:

Couplers are a critical piece of railway equipment that connect the engine and all of the cars of a train. Couplers provide an engineering challenge as they must withstand massive tension and compression forces. It is not uncommon for trains to pull hundreds of cars that stretch for over a mile.

Since couplers connect together different pieces of rail equipment they must be standardized for an entire rail system. Since railroad cars link together. There must be a coupler on both ends of the railroad car. This brings up an interesting thought. People link and unlink railroad cars on a regular basis. I suspect that railroad cars are designed to be symmetrical. The front and back would be the same; so that they could be turned around without any effect.

So, I decided to draw the Janney Coupler. I started the drawing in ink and decided to finish it off in graphite pencil.

Eli H. Janney invented the knuckle coupler in 1868 and filed a patent for this device in 1873 (U.S. Patent 138,405). The couplers have two opposing knuckles shaped a little bit like a human hand. Some posts indicate that Janney whittled the first prototype.

When one pushes the knuckles the flanges on the knuckles will fold in on each other and a pin will fall into place to clamp the knuckles together. To detach the couplers, one need simply remove the pin allowing the cars to separate. Statistica reports that there was over 1.6 million railroad cars in the US in 2020. This cars would have 3.2 million couplers. Locomotives and cabooses would also have couplers. (okay, I guess cabooses are out of fashion).

I did a second search on the life expectancy of a railroad car. Apparently, the Federal Railroad Administration limits the life of a railroad car to 50 years. The cars could last longer than that. Recycle Nation shows some of the things people do with old railroad cars.