travelingmercies in StemSocial • 8 months ago
I have to walk before I can run. This has been a constant reminder for myself whenever I would start learning something new. A few days ago, I was able to work on the tasks for the citizen science project smoothly, as the tutorial was easy to follow. After the installation of the MG5aMC software, we have now began to implement this tool in simulating particle collider experiments. In particular, for this week's tasks, we produced a top-antitop pair in proton-proton collisions.

Particles available within the Standard Model

Using MG5aMC, automated simulation and calculation which involves knowledge in particle physics can be performed using regular computers, I used my personal computer with the tasks I've done in this project. The labels of the particles that can be used to define the processes that can be simulated in the software are shown below. MG5aMC is started in a shell through the command: ./bin/mg5_aMC in the folder where the software was unpacked.

Defining the process of interest

In this, we generate a top-antitop pair with a proton-proton collision. The particles correspond to the following labels: proton (p), top quark (t), and antitop quark (~t). There could be different options to produce a top-antitop pair, these can be represented using Feynman diagrams. It's a simple visualization that encapsulates the possible processes that can occur from an initial to a final state.

I have compiled the Feynman diagrams related in generating the 5 processes in producing a top-antitop pair. When I was taking an online introductory course in particle physics, I found the Feynman diagram as a simple and powerful way of representing the interactions of the elementary particles. 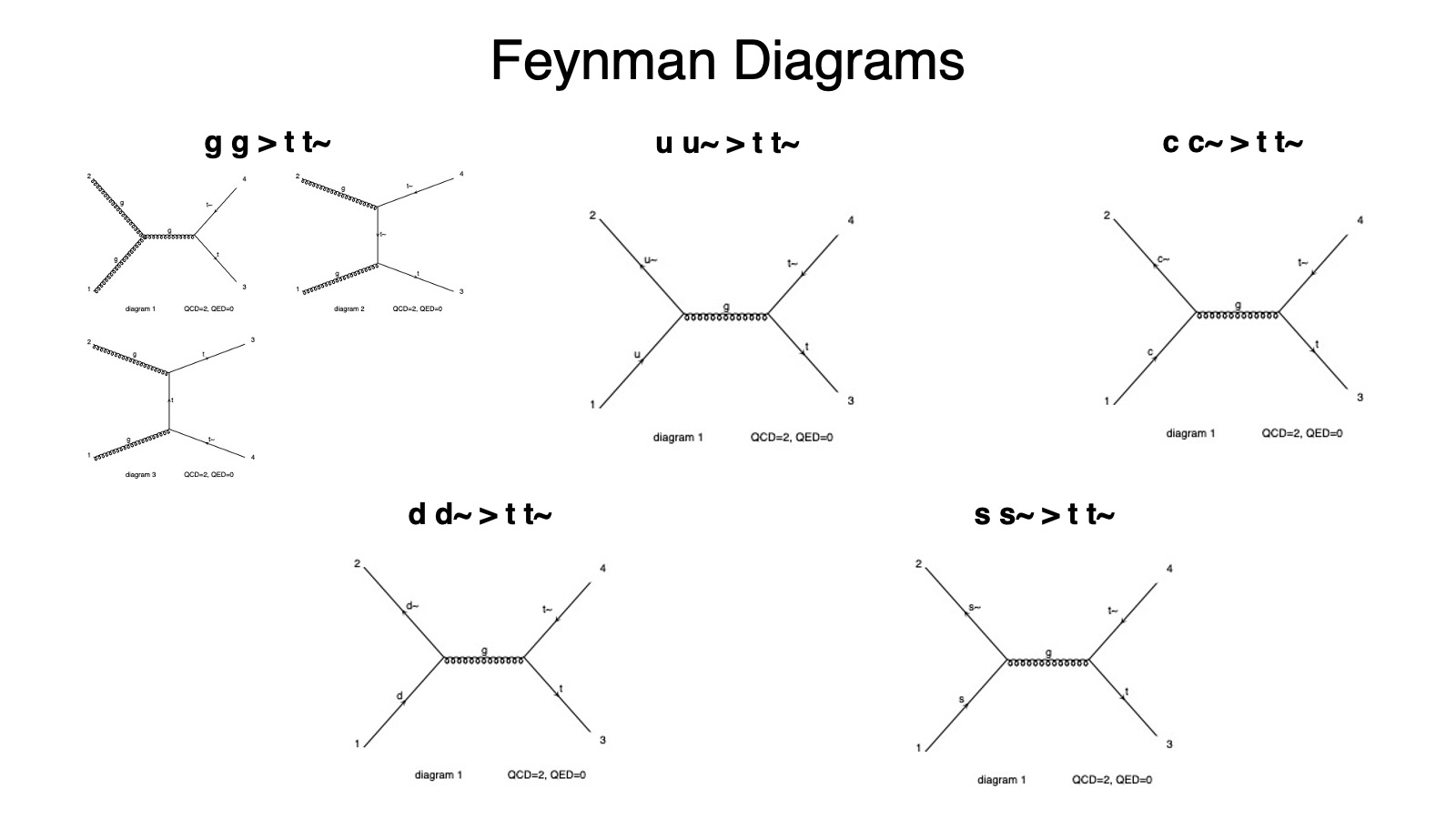 That is also the reason why I named the working directory of the output from the simulation as wobble, from Feynman's wobbling plate story, where his work that earned him a Nobel Prize began. The command output directory_name stores the results of the processes from the Feynman diagrams. The mathematical expressions visualized by these diagrams are converted into a Fortran code, a function that is available in the software we're using. Calculating the rate of the process

By starting MG5aMC again, the command launch directory_name will compile the Fortran code from the previous step, perform an automated calculation, and produce the output of the results. Below is the default menu where it can be modified to fit our point of interest. 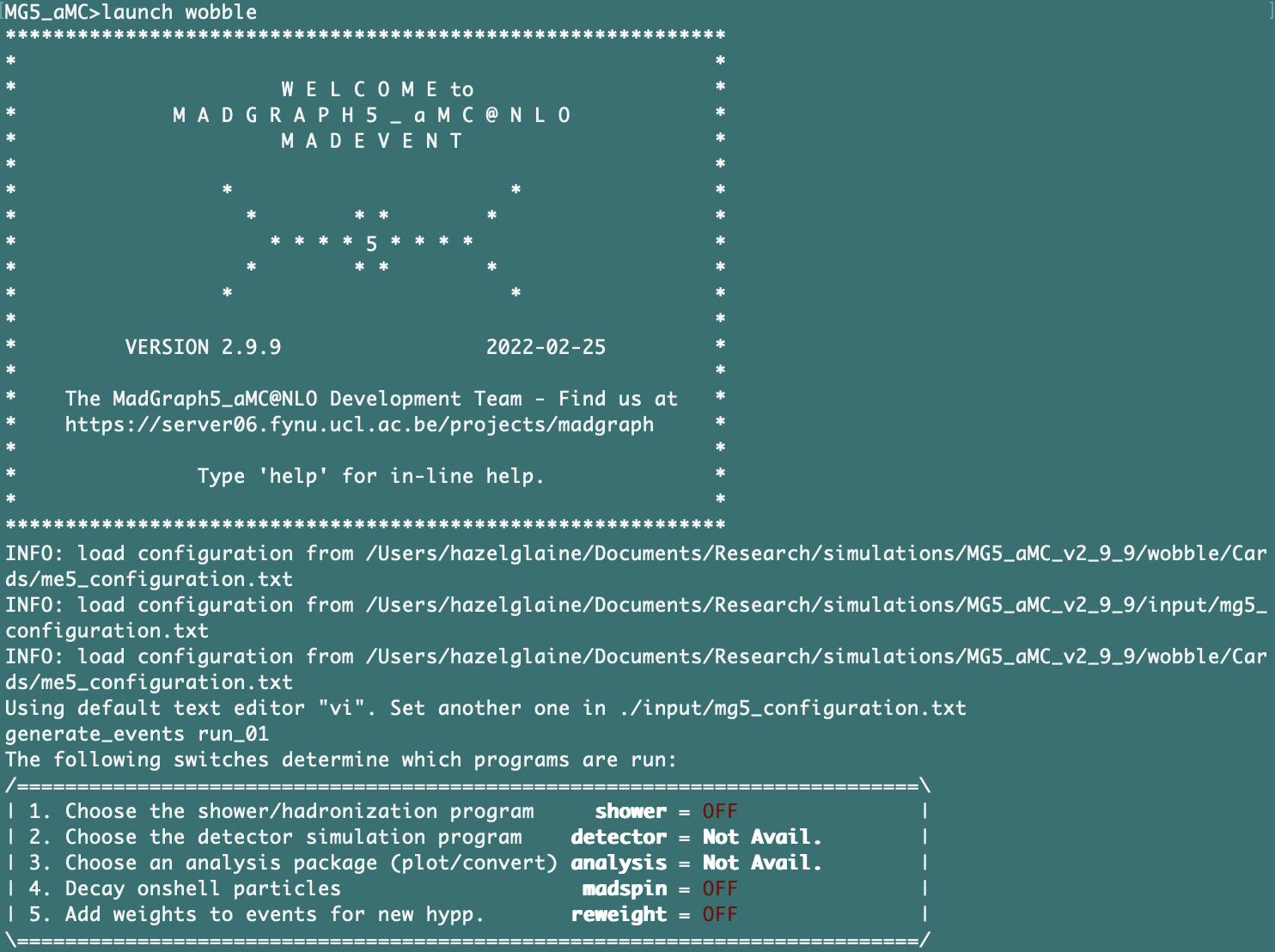 The interactive menu is easy to navigate, options to enable Pythia8 and MadSpin. I am still not familiar with these two packages and the tutorial also reminded me that it's not yet necessary to understand how to interpret these results. So, I was more focused on navigating with the parameters I can tweak.


These are the simulation parameters which follow after enabling the Pythia8 and MadSpin. The four cards mentioned are the following: param_card, run_card, pythia8_card, and madspin_card. Everything was left with its default parameters except for the run_card.


I wasn't sure what editor was used by my command prompt, but by pressing Enter(Return) key, I was able to insert text and change a line in the script of the run_card:

The changes I made was saved by typing :wq. Followed by these parameters, the simulation part began and ran for a few minutes. The simulation performed this week resulted a cross-section of 504.1 ± 0.6866 pb which corresponds to the production rate of a top-antitop pair at the LHC.

While writing for this report, I went back to the blog where this project was introduced. I was reminded that this project is headed in studying neutrino mass models. I was able to learn about neutrinos in this blog. I had some notes I've taken down while reading the blog and briefly reading some other references:
The last point left me with more questions when I was nearing to having an understanding of what is currently being done in neutrino physics. This is only a part of this new field of study I am trying to pursue but here is where my interest starts. I hope I'd be able to go through the readings I've bookmarked on the next days, and if you have some thoughts/answers too, please feel free to share it with me. :)

I apologise for having missed your blog. For some weird reasons the notification system failed and I only noticed it 30 hours after you posted it. Anyway, here I am (better late than never!). First of all, I must admit that your report is super clear and easy to follow. I totally appreciated reading it and it was a real pleasure to discover it.

Let me now move on with a few minor comments, before addressing the answer to the question you raised at the end of your blog. Or at least, before beginning to address it (I am sure the discussion will be continued soon).

That is also the reason why I named the working directory of the output from the simulation as wobble, from Feynman's wobbling plate story, where his work that earned him a Nobel Prize began.

I had a lot of fun in remembering the wobbling plate story. It is important to always have fun with what we do! Always! I am telling this to my sons day after day, and I hope this is something they will remember during their entire lives.

Don’t worry, this is for next week, when we will play with event reconstruction and detector simulators.

I wasn't sure what editor was used by my command prompt

From what you wrote, this is definitely VIM or VI. I like it a lot, personally. It is however very non-intuitive (as some other editors are too).

And now the major point of this reply...

The goal of the experiments is to measure the neutrino masses (determining the upper limit?) and the so-called mixing parameters which dictate the flavour content of each neutrino (there are 6 of those parameter, what are those?)

First of all, I would like to emphasise that we do not aim to make any measurement in this project, as we only plan to work with simulations. If our results are promising, then experimentalists may initiate the tasks that will lead to the corresponding measurements in data.

I am unsure that this fully answers your question, but it probably partly does it. From there, feel free to come back to me and we will pursue the discussion.

Submit
0.00 STEM
1 vote
Reply
[-]
travelingmercies  8 months ago
The excerpt from the book is one of my favorite stories Feynman shared about his adventures. :) It's a great reminder for every curious minds of why they started pursuing science in the first place.


Oh, apologies, the last point was actually about the experiments in neutrino physics in general and also from your blog post mentioning about those 6 parameters. I have read this article about new upper limit on the mass of neutrinos while trying to learn more about neutrino mass models. Sometimes, I think about how the scientific community is both fast and slow in making discoveries. Like how a few years ago, neutrinos were considered massless and now, when I look at my printed copy of the table of SM, there's a corresponding mass for the neutrinos, albeit their upper limits only. It's great to be at the present where technology is catching up and brilliant minds are coming together giving it a push.


This is a more specific answer to my question from my previous report, as I was a bit clueless on what simulations this project aims to do.

What we will do instead is to try to see how well the parameters of neutrino sector can be assessed through a specific signature studied at the Large Hadron Collider. In terms of free parameters, the idea is to target the neutrino effective mass matrix that consists of a function of all the parameters of the neutrino sector (the three neutrino masses, the three mixing angles and some potential CP-violating parameters) into six more global quantities that can be directly targeted at the LHC. I am unsure that this fully answers your question, but it probably partly does it. From there, feel free to come back to me and we will pursue the discussion.

I really appreciate it that the idea is getting finer to me that I am little by little getting a grasp of it. I hope it won't frustrate you if I keep on getting sidetracked or if I'm getting ahead of the tasks. 😅 I'd surely come back to this thread/to you when I stumble on more questions as I go on with my reading materials for this week, but right now, I got my answer about those 6 parameters. Again, thank you very much in everything that you're doing in this project and in particle physics. ☺️
100%
-100%

Mmmh today I learned something :)

have read this article about new upper limit on the mass of neutrinos while trying to learn more about neutrino mass models.

The article you mentioned discusses the limits obtained from the KATRIN experiment that study beta decays (I discuss this in the third section of this neutrino blog). In short, KATRIN studies a process in which a given atomic nucleus decays into another nucleus, an electron and an invisible neutrino. By studying the kinematic properties of the electron, it becomes possible to constrain the (effective electron) neutrino mass. The experiment obtained a limit on the electron neutrino mass scale of 0.8 eV.

As a side note, I had in mind a value of 1.1 eV as a limit, but the link you mentioned refer to 0.8 eV. I somehow missed the 2022 update. This explains the first sentence of my reply ;)

Now:, I would like to come back on the following sentence.

Sometimes, I think about how the scientific community is both fast and slow in making discoveries.

To emphasise this a little bit more, the first article mentioning a potential LHC project dates from the 1980s. The construction of the machine started in the early 2000s, and the first data taking period was in 2007. The LHC is supposed to operate until 2035-2040. This time scale is inherent to what we aim to do, and there is nothing to be done about it (except by having infinite funding).

I hope it won't frustrate you if I keep on getting sidetracked or if I'm getting ahead of the tasks. 😅 I'd surely come back to this thread/to you when I stumble on more questions as I go on with my reading materials for this week, but right now, I got my answer about those 6 parameters. Again, thank you very much in everything that you're doing in this project and in particle physics. ☺️

I will never be frustrated and I will always be happy to answer anything. So feel free to shout out any question at me!

Have a nice week!

Thank you @ecency team for your support! :)