Center of gravity some generalities_Part X

rbalzan79 in StemSocial • 2 months ago

First of all a respectful greeting to all the academic and scientific community of @Hive.blog, we continue with our purpose to continue to know a little more about the wonderful phenomenon of the center of gravity of a given particle system.

There are innumerable phenomena that have a notable influence on our existence and it is difficult to name them all, however, many of these phenomena cannot be observed because they develop within a spectrum of light or electromagnetic energy beyond the reach of our eyes, although with some of them we can feel their effect as is the case of gravity which we do not visualize, but thanks to it we remain in constant contact with the crust of our planet Earth.

If we throw any object upwards it would fall due to the gravitational action of the earth's core which attracts the object, if we place a wheel or any circular object on an inclined ramp, logic tells us that it should roll down towards the bottom due to the effect of gravity mentioned above.

Let us remember my friends that the center of gravity represents that imaginary geometric point which acts as the concentration of all the component forces of a given particle system, it is also important to note that the center of gravity of any particle system we have been able to move it from its natural place to another point in order to generate greater stability to the entire system.

This time it will not be otherwise and for this tenth part I have decided to make a very simple particle system, which I have called the cylinder that defies the action of gravity, of course, this with the remarkable help of the aforementioned imaginary point with which we locate the center of gravity of an object, body or particle system, another aspect to highlight is that I will continue to implement elements or materials easily accessible in our homes.

As we have witnessed our environment varies from simplicity to the most complex and this characteristic permeates everything around us including our own physical entity, and without leaving aside our majestic universe which reminds us in every action that the simple does not mean less important in terms of obtaining any kind of knowledge.

In relation to the above, we can affirm that the simplicity of each experimental practice does not mean that we cannot grasp the purpose, on the contrary, it invites us to a better understanding, and for me the most important thing is that the radius of understanding is notably enlarged for any type of person without the need to be an expert in the subject.

This is science, gentlemen, capable of making us understand the phenomena that have a remarkable influence on us and we can develop it anywhere we are, in schools, high schools, universities, prestigious institutions or the wonderful space where we spend much of our existence such as our homes, before moving on to the development of the particle system mentioned above, let's know some of the materials that I will use such as.

Before showing you the particle system it is important to perform the following analysis related to the cylinder to be used which will challenge the principle of the law of gravity with the help of the conceptualization of its center of gravity, it is convenient that you can observe the following picture. 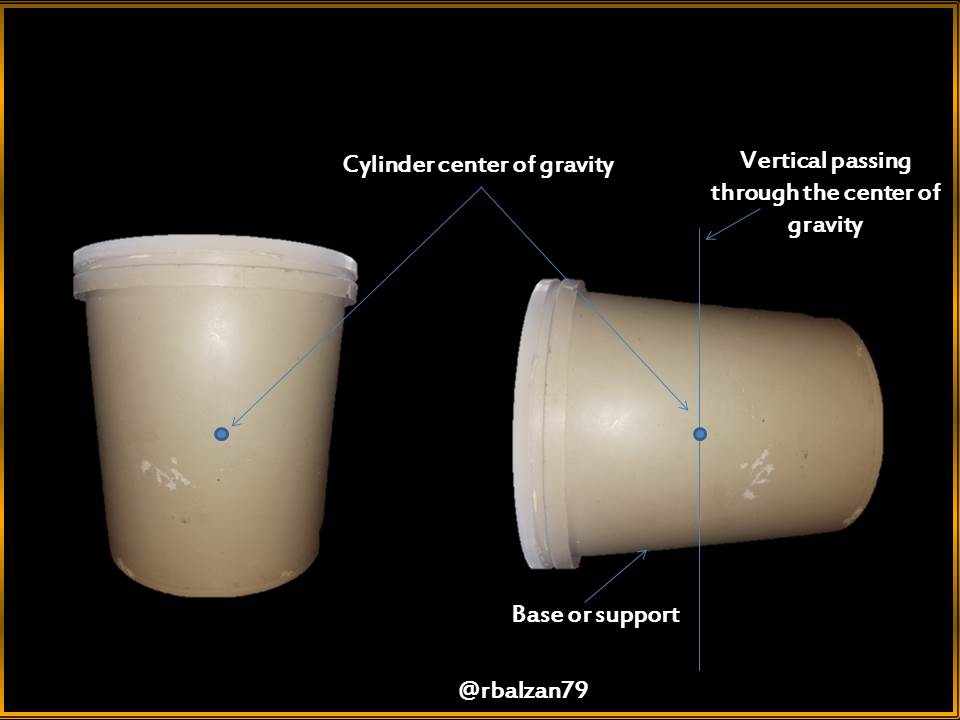 In the previous image you can see the location of the center of gravity of the cylinder, and it is located inside the plastic container, that is, in the material medium called air, this point as you can see does not allow us to support another element because the air does not have the molecular structure to do so, as is the case of solids, in this case its walls.

The walls of the container serve as support to stabilize this object as you can see when passing the vertical line through this solid support, to rotate this cylinder from its center of gravity, we must have the molecular structure for its physical support, and for this, continuous cyclic harmonic movements would be developed until it stops providing a certain mechanical or manual force, as described above can be visualized below in the following image.

Now we will go into detail in the configuration of our particle system which will defy gravity by moving its center of gravity to its supporting wall, let's start looking at the cylindrical object from a horizontal plane as shown in the following image. 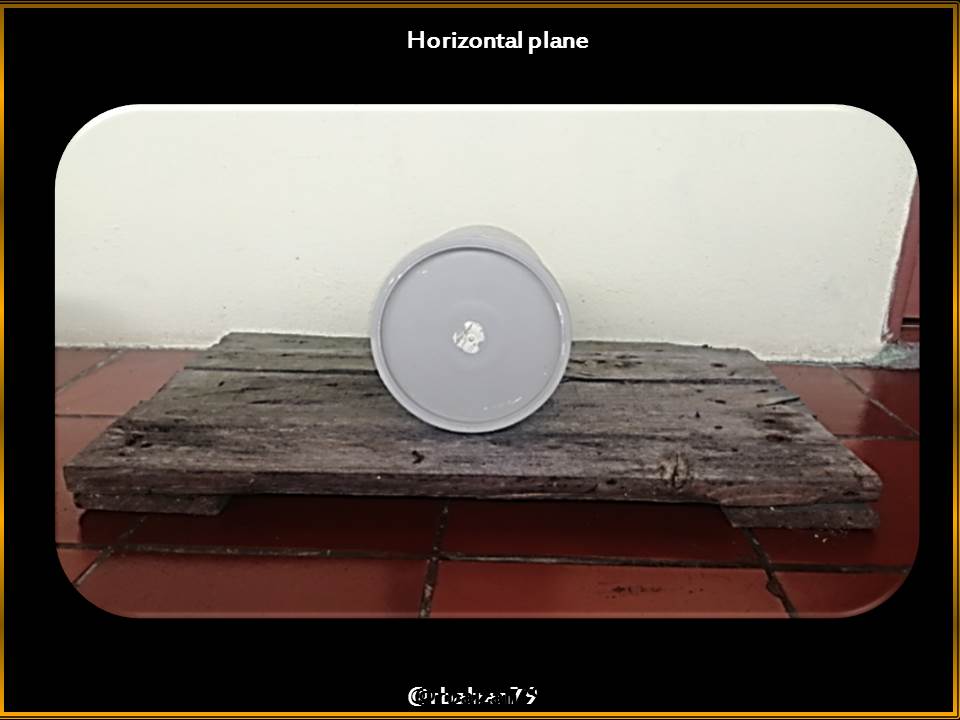 In this way both the ramp and the cylindrical object are parallel to the ground, that is, horizontally, so the cylinder will move from one side to another if we apply some kind of force with our hand, but what would happen if the ramp is now placed inclined and with the cylinder mounted on it, according to the law of gravity the inclination of the ramp would make the cylinder does not remain on it as it would roll to make contact with the ground, let's see what happens in the following image. 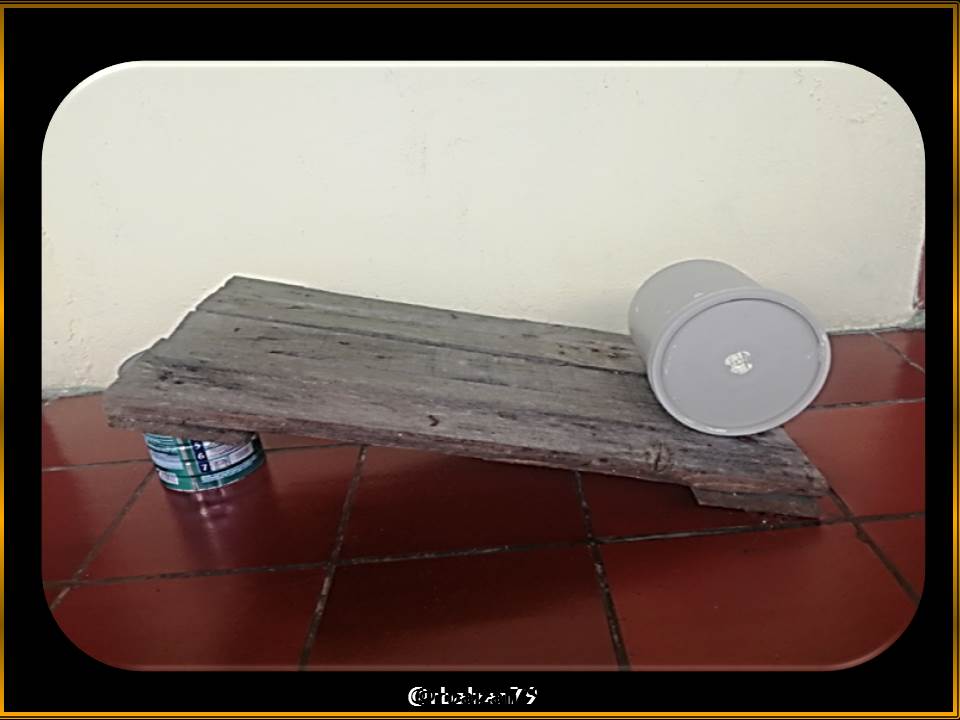 In the previous figures we started placing the cylinder on the ramp at the bottom where it still has inclination which would make the cylinder roll to the ground but it does not, let's keep moving the position of the cylinder to see what we can notice. 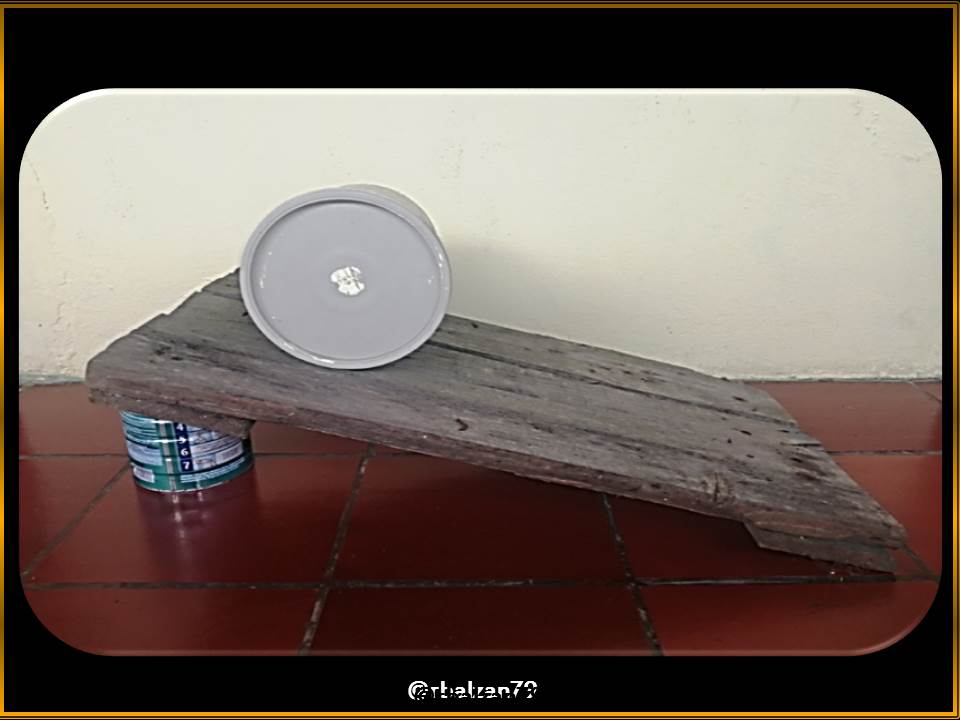 In these images the cylinder is even more where the degree of inclination is greater, and even so, the cylinder remains on the ramp without falling from it due to the effect of gravity, let's see if there is something that holds this cylinder which does not allow it to fall. There must be some phenomenon that allows us to keep the cylinder on the inclined ramp, so let's look inside the container to see what is happening as you will see in the following pictures. 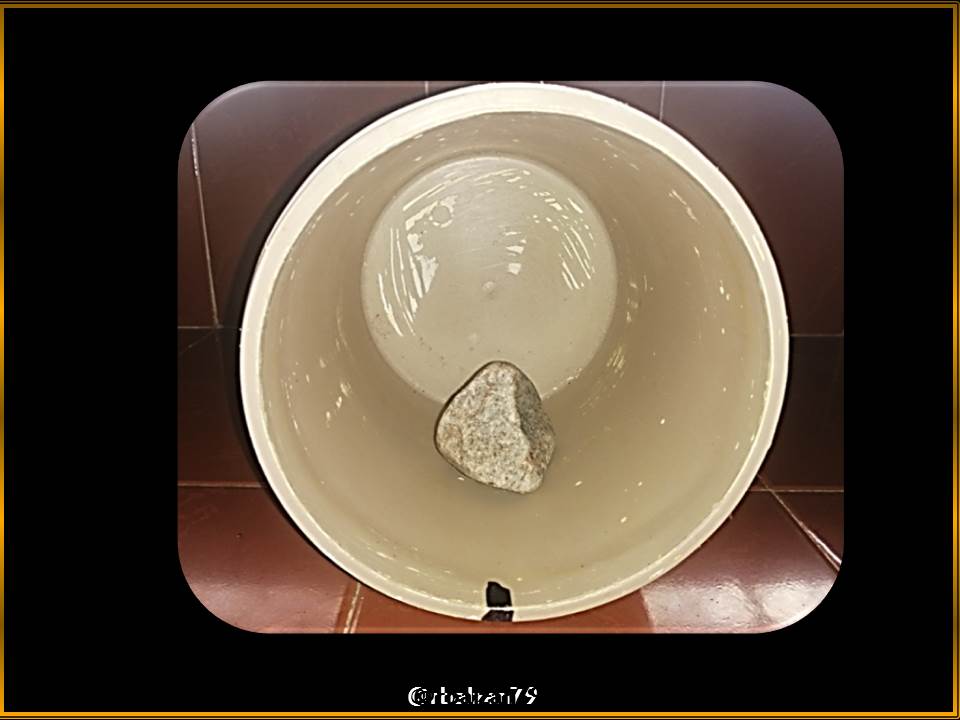 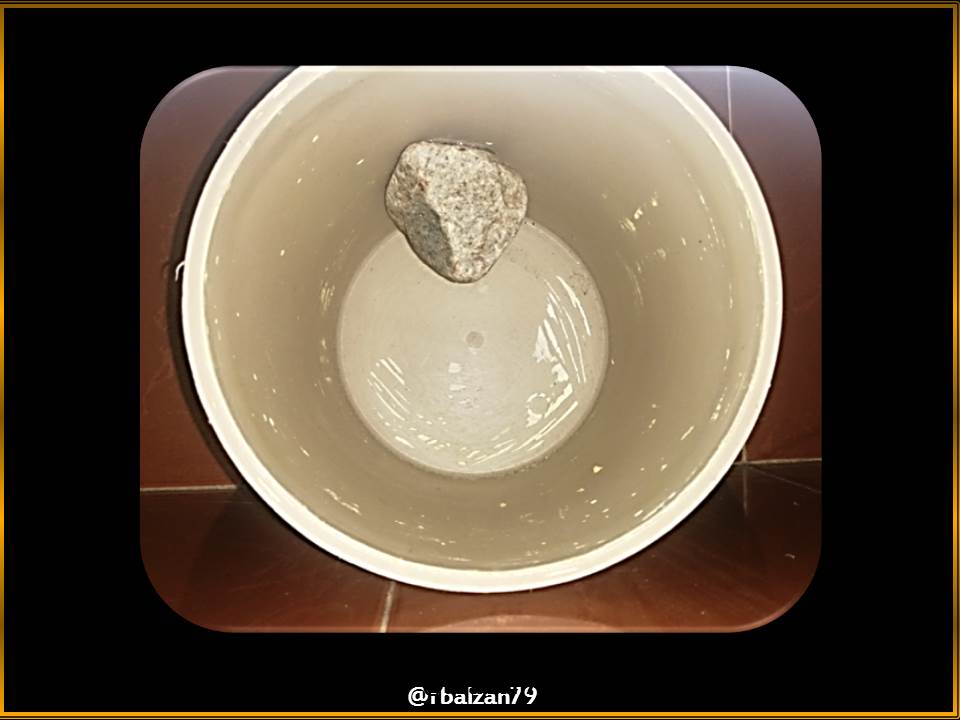 Now if we find the reason that keeps the cylinder on the ramp even though it is inclined, we have moved the center of gravity of the particle system to another place below its natural location, this weight or force that I have placed has allowed me to keep the cylinder-shaped object on the inclined ramp.

Although I have made the ramp more inclined, the cylindrical object still remains on the ramp and even if we turn the object back a little bit, instead of rolling down it would go upwards defying the phenomenon of gravity thanks to the displacement of the center of gravity of this cylindrical object.

Everything around us is influenced by the action of gravity of this there is no doubt, however, with some techniques we can develop other phenomena that can get to defy this essential phenomenon of gravity as I have been able to do on this occasion and that each of you have noticed it.

The most important thing is to be able to experience it in order to realize this and surely you will continue to expand your knowledge or understanding of the development of each of the phenomena that develop around us, such is the case of the center of gravity.

Until another time my dear readers of @Hive.blog, especially the members of the great @stemsocial community, to whom I recommend to be part of this great project, as it highlights the excellent work of the academy and the wonderful work of the entire scientific field.

Note: All images are my own and worked in Power Point, and they were photographed with the camera of the Samsung Galaxy J2 Pro cell phone, and the animated gif was made with Photo Scape.

Congratulations @rbalzan79! You have completed the following achievement on the Hive blockchain and have been rewarded with new badge(s):

Hi, @rbalzan79. It's a nice post as always. It would be great if it also had the math behind this particular experiment or demonstration, in order to differentiate it from crafts. Also, try to add sources to your posts as it is a curation standard. The sources I saw are basically links to your own posts.

Submit
0.00 STEM
Reply
[-]
rbalzan79  2 months ago
Hello dear @eniolw, first of all thank you for your visit to my article and for your recommendations, in relation to the mathematical aspect I could highlight that I performed this experiment with three different angles of inclination α (38°, 44° and 57°) approximately which were calculated with the help of the generation of the right triangle and its three known sides formed between the height of one of the ends of the ramp and the ground as you can see in the picture. In which, I could notice that in the inclination with angle α of 57° the cylinder did not stay on the surface since despite the weight inside it was not enough to counteract such angle of inclination, without leaving aside the intrinsic geometrical aspect of our object since its cylindrical shape represents a major challenge to keep it attached to the inclined ramp.

Another aspect to highlight is that the purpose proposed by me as author of the post is to carry out this practical experience from a theoretical-practical analysis and with elements or materials easily accessible in our homes, highlighting also that not only the mathematical aspect represented in any of its presentations (such as those mentioned above) has the characteristic of separating this experiment from the only fact related to a craft, since the aspect of interpretation from a vision of physics related to the center of gravity in the same way permeates the necessary and sufficient elements for such separation and purpose raised, and this aspect I have highlighted throughout this thematic series.

Greetings dear @eniolw thank you for your great work in the STEMSocial community from which we all benefit. Success.

I understand. Perhaps you could add a section with one of two paragraphs about the implicit math. It's just an idea.