Center of gravity some generalities_Part V

rbalzan79 in StemSocial • 2 months ago (edited)

First of all my respectful greetings to all the academic and scientific community of @Hive.blog, we continue in the search for the various forms of equilibrium through the center of gravity of any body or object or system of particles.

Our main purpose is to continue demonstrating that everything around us can be in equilibrium thanks to the effect of the phenomenon of the center of gravity, that is why we will continue relating in a simple and practical way with the center of gravity of any object or body around us, or consequently with a whole particle system composed of several objects or bodies as you will see below.

That is why my dear readers, we will continue making small and easy practical experiences, and also, with materials very easy to get in our homes and thus continue to expand the knowledge related to the phenomenon of the center of gravity, emphasizing again that any object or body is constituted by any number of particles, which will have their own weight, and all together make up the total weight of the body or object to analyze, and no doubt, there will be a resultant force considered as a concentric imaginary geometric point.

In the previous point described above, we will be able to maintain in equilibrium the whole system of particles of the objects or bodies involved as we have been demonstrating in each of the previous articles.

In the same way as in previous opportunities we continue locating objects that allow us to structure a system of particles and thus demonstrate again the action of the center of gravity, and as we have described, the individual forces parallel to each other give rise to what we have called resultant or concentric force, that is why we describe the materials to be used: 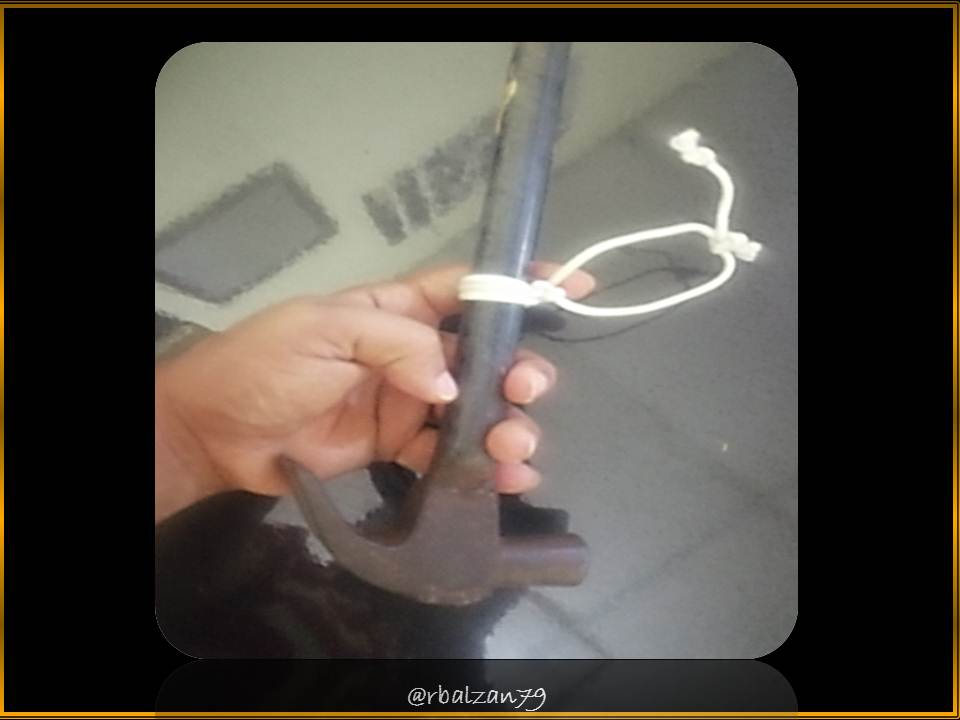 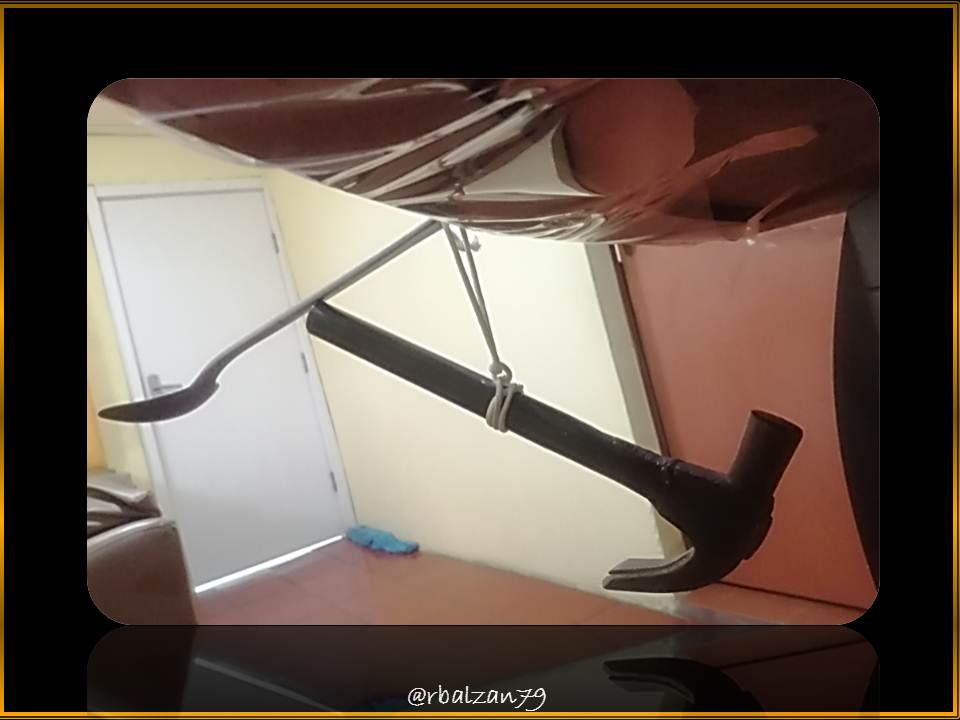 In the previous images you could see how the particle system formed between the hammer and the metal spoon or paddle has its center of gravity in the middle of both objects, that is to say, outside of each one of them, this allows us to balance this system as you have clearly observed, it is possible to apply some force with one of our hands and this system will balance until it returns to its stable equilibrium point.

In this way we will analyze the following practical example, also very simple, but of equal importance for the description of the center of gravity of a composite particle system, for which we will describe the following materials to be used. With these few and simple materials we managed to form another composite particle system whose center of gravity is also outside of each of the objects present in the particle system, and in this concentric point is that we achieved that all this particle system remains in equilibrium as you can see in the following pictures. 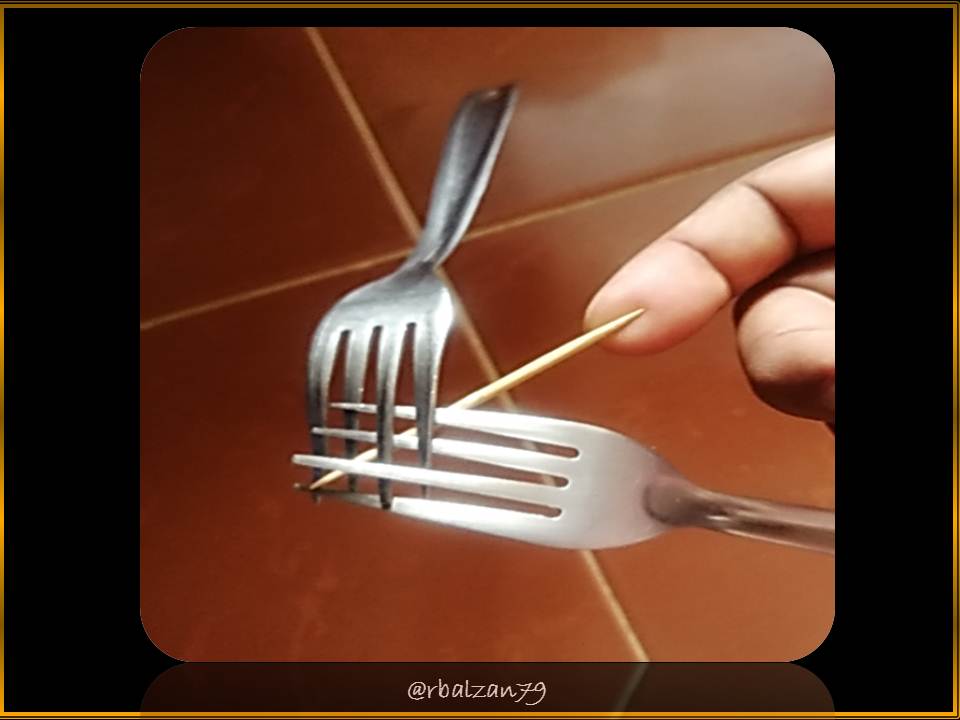 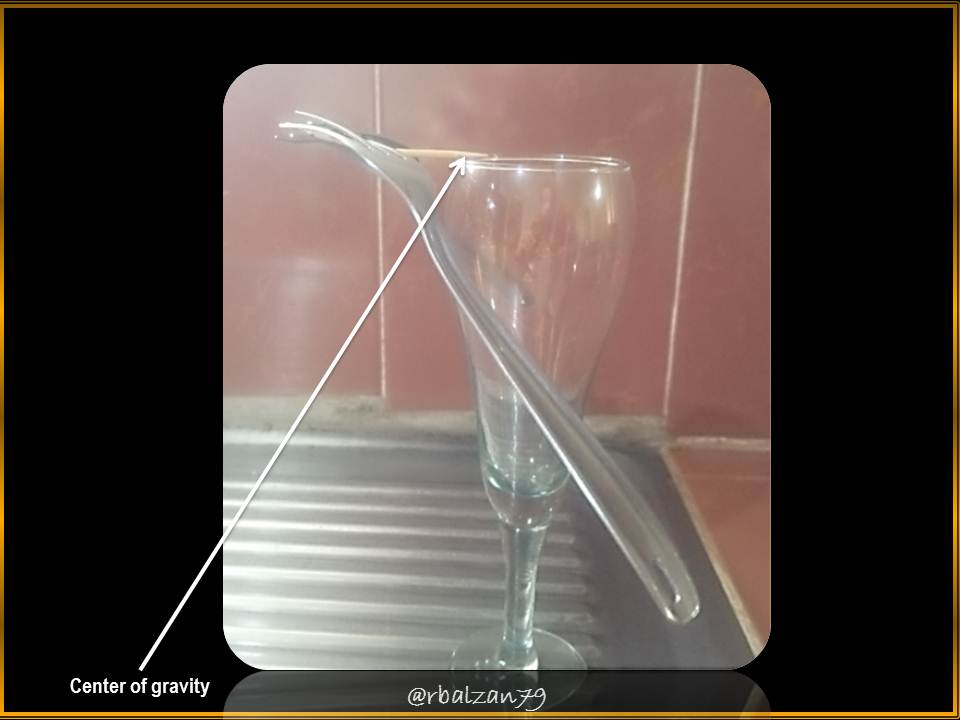 It is important to express that through simple practical experiences we continue to demonstrate the action of the center of gravity of a given particle system composed of two or more objects as you have seen in the two previous examples, and also highlighting that the action of science can be carried out anywhere where we are.

Until another time my dear readers of @Hive.blog, especially the members of the great @stemsocial community, to whom I recommend to be part of this great project, because it highlights the excellent work of the academy and the wonderful work of the whole scientific field.

Note: All images are my own and worked in Power Point, and were photographed with the camera of the Samsung Galaxy J2 Pro cell phone, and the animated gif was made with Photo Scape.

Thank you for your valuable support. Best regards.

Those are nice fun unexpected examples. Maybe this kind of gamification can help a lot when teaching the concept!

Congratulations @rbalzan79! You have completed the following achievement on the Hive blockchain and have been rewarded with new badge(s):

The best way to understand something is with practical examples. Amazing experiences! Thanks for sharing !1UP

The best way to understand something is with practical examples.

That's the best way to do it, thanks for your visit and comment. Greetings.

Thank you for your valuable support. Best regards.

Those forks are a pretty cool kitchen experiment ^^

No doubt they are, thank you for your visit and for your comment. Regards.

Thank you for your valuable support dear community. Best regards.