Center of gravity some generalities_Part II

rbalzan79 in StemSocial • 3 months ago

First of all my respectful greetings to all the academic and scientific community of @Hive.blog, so far in each of the previous articles we have realized that everything around us has given us the possibility to continue existing in this very complex but wonderful universe.

Our physical entity (body) is endowed with this complexity and from it we have learned to try to find the balance between us and our environment, remember that there are countless phenomena that develop around us and that have great influence on our existence, for example, movement, light and sound to name the most recognized by all of us.

This time we will continue to relate in a general way with the center of gravity of some objects or systems that are already around us or that we can structure it by implementing as usual elements of easy access in our homes and that maybe we do not even think that we can give it another use.

The fields of science and education have allowed us to evolve in every sense, and have also provided us with innumerable characteristics that somehow develop our creativity in terms of how to both experiment to extract any form of learning and also experiment to find the best way to spread this knowledge to all of us and also endure over time with which we have structured our valuable history.

Let us remember again my dear friends that every object or body that surrounds us is constituted by certain quantities of particles, and which have an individualized weight, highlighting that the representative magnitude of the resulting force of all these component particles gives us the total weight of that object or body, therefore, we can say that the phenomenon of the center of gravity of a certain body, object or system of particles is represented by that geometric point, where all the total weight of that system of particles is concentric, and from this point we can find the balance of the entire system.

Therefore this is what we will do, that is, through some practical and very simple examples we will demonstrate the location of the center of gravity of certain particle systems, highlighting also that we will use elements of easy access in our homes.

All the component particles of both our body and everything that surrounds us are significantly influenced by the earth's gravity, and this force (gravity) multiplied by the mass of certain bodies or objects originates what we call weight, therefore being this magnitude (weight) directly proportional to both values of both the mass and the gravitational force.

Now we focus on our point of analysis, that is, the center of gravity, and as we said before, this action is linked to the number of component particles of the body or object to be analyzed, and therefore, all the accumulated forces parallel to each other of these particles give rise to the resultant force which will indicate the total weight.

Before showing our next practical examples let us remember those elements such as the line of gravity which is nothing more than a vertical which passes through the concentric geometric point which represents the center of gravity, and of course, the other very important element to highlight is the support base or supports where the vertical or line of gravity must meet or fall so that the body or object.

Next we will show some examples where we will be able to visualize the center of gravity previously mentioned as you can see in the following images, indicating the materials to use. Then we proceed to structure our support base for the particle system as shown in figure 2 below. 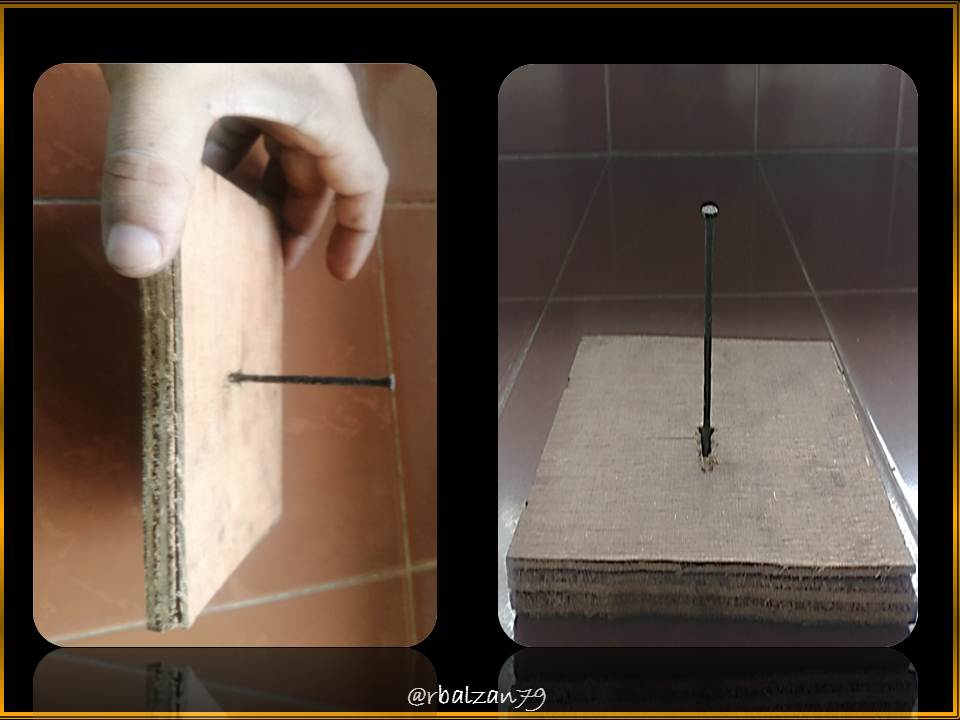 Now with our hand we lift the particle system made up of the set of nails as shown in figure 3 below. In this way we take it to place it on the support base which is another nail, carefully locating the balance of the system and this is achieved by locating the center of gravity of this system of particles as you can see below in the following figure 4. 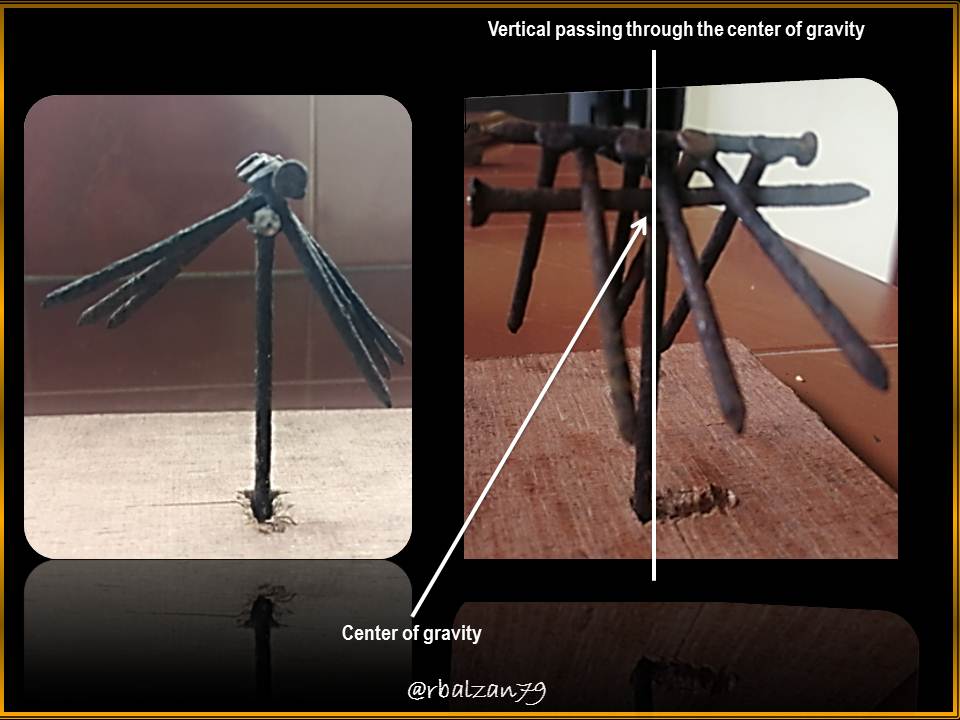 In this way, we have located the center of gravity of our particle system formed by the set of nails mentioned above.

For our second example we will implement an object whose center of gravity is outside the set of particles that conforms the object to be analyzed and this object is a CD, those who have been able to know this type of object we noticed that in the center of it has a hole, where, should be the imaginary geometric point that represents its center of gravity, therefore, we will place a small portion in that hole as you can see below in the following figure 5. Then we proceed to place our object (CD or DVD) on our support base until it reaches its equilibrium and when this happens it is because we have found its center of gravity as you can see in the following figure 6. 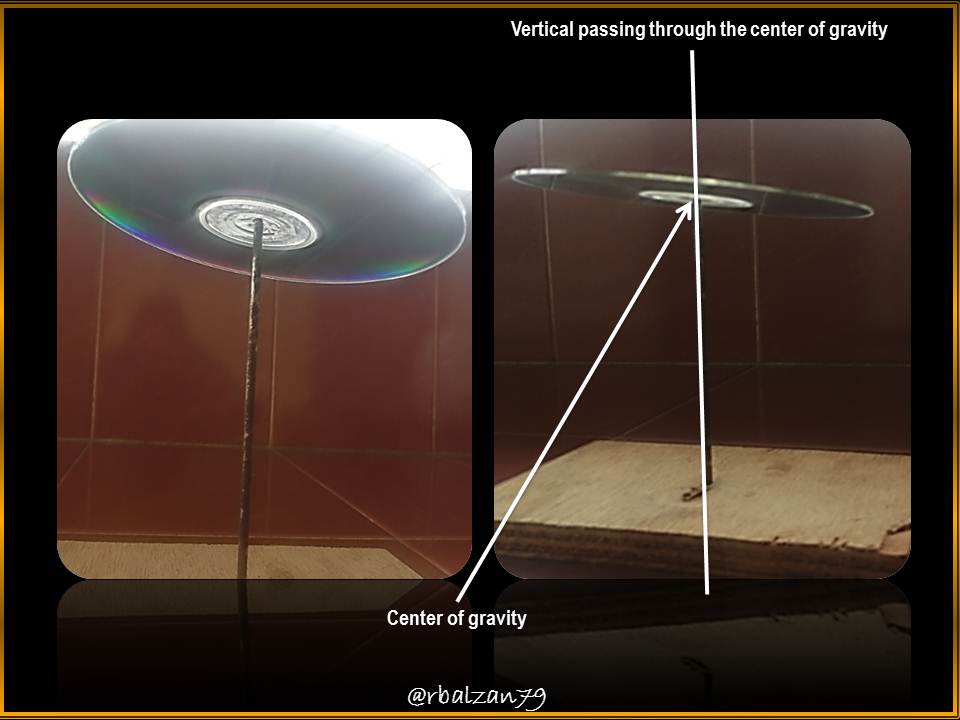 A top view of the CD shows us the concentric geometric point of the total weight of this object, thanks to the placement of a small piece of transparent tape. With two simple but important examples we were able to know the concentric points (resultant force) that represents the center of gravity of a system of particles formed by a set of nails as well as that of our CD, highlighting that we use elements of easy access in our homes, and thus also demonstrating that the action of science and education is found in any space-time of our existence.

Until another time my dear readers of @Hive.blog, especially the members of the great community of @stemsocial, for which I highly recommend to be part of this great project, because it highlights the excellent work of academia and the wonderful work of the entire scientific field.

Note: All images are my own, photographed using the Samsung Galaxy J2 Pro cell phone camera, and the animated gif was made using Photo Scape.

Submit
0.00 STEM
513 votes
Reply 7
Sort:
[-]
poshtoken  3 months ago
The rewards earned on this comment will go directly to the person sharing the post on Twitter as long as they are registered with @poshtoken. Sign up at https://hiveposh.com.
100%
-100%

Thank you for the promotion. Greetings.

Thanks for sharing this other set of simple set of experiments that could help us to visualise the centre of gravity of a system and why it matters. As a side not, it is not clear to me how you managed to have the system of nails not falling apart. I should probably try it out to see, which I cannot do from a train ;)

Submit
0.00 STEM
3 votes
Reply
[-]
rbalzan79  3 months ago
Hello dear @lemouth, thanks to you for your important visit to my article, in relation to the system or set that I made with nails, after several attempts I got that the key to keep it together are the two nails that hold the system of particles, where, one is of less length and thickness than the other as seen below: 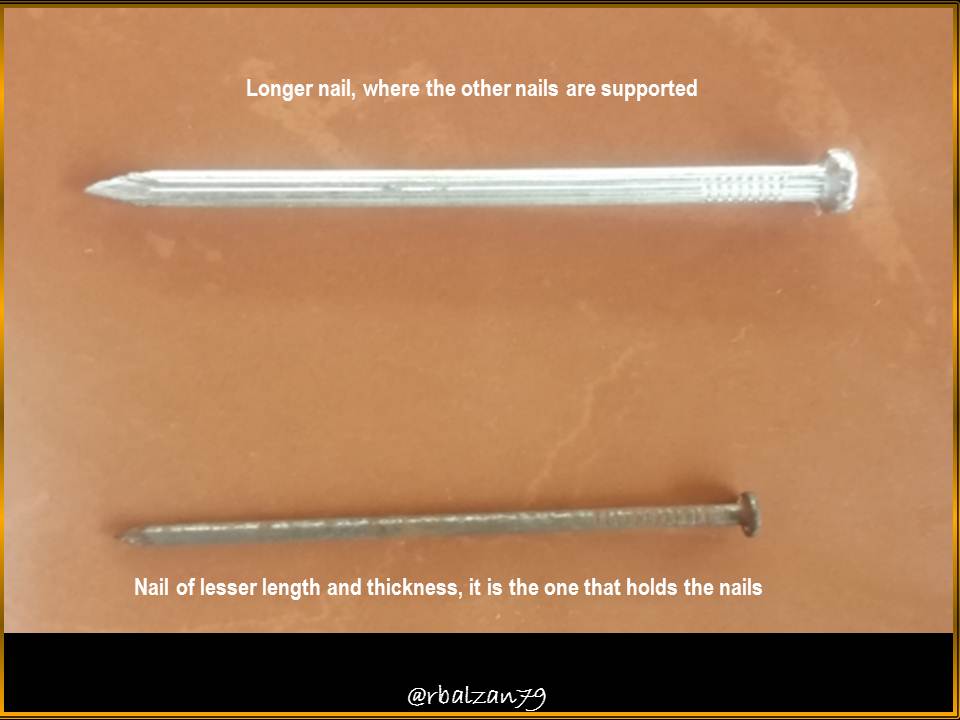 Now, my friend, I share with you the following images related to the structuring of this particle system but with other nails: 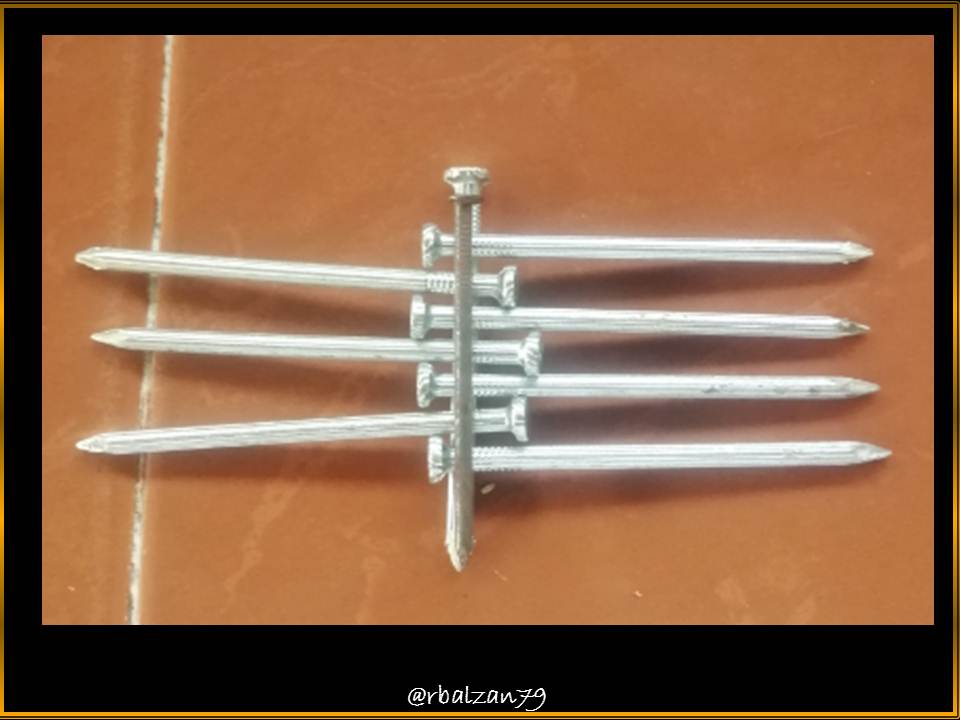 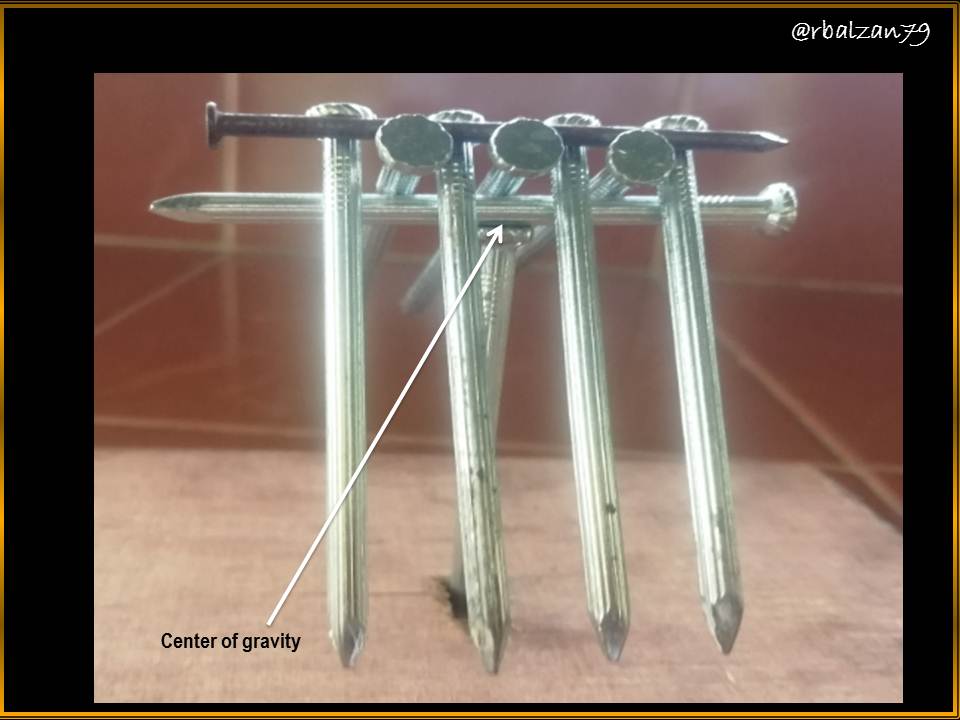 Another key (if necessary) is to rest one of our fingers on the shorter nail when lifting the system until the interlocking nails are held in place. Sometimes the previous step is not necessary and this will depend on the shape of the head of the nails to be used, I hope these images have helped you to better clarify how I could keep in balance this system. Greetings and keep in touch.

Hmmmm now I see! All the images are very clear. I will check it out tonight with my boys. Thanks for coming back to me!

Thank you for your support dear community. Best regards.