WATER AS A FUNDAMENTAL SUBSTANCE FOR VETERINARY MEDICINE, A CONCEPTUAL APPROACH. Greetings dear readers who accompany me daily in the scientific approach of this space of divulgation. The topic that concerns us in this opportunity is related to the use and benefits of water as solvents and as a fundamental substance in the area of veterinary medicine.
Therefore, we will conduct a literature review that will allow us to understand the metabolic contributions of the vital liquid, as well as its uses in practices associated with veterinary medicine and as has been constant in my publications, we will share this type of material through the community as @Stemsocial, a pioneer in the scientific approach within the #Hive platform.

Water is a substance of vital importance, largely due to its structural conformation that gives it exceptional properties for life. It is formed by the union of three atoms; one of oxygen and two of hydrogen (H2O), and it is the type of bond by which these atoms are united, which gives it properties and functions in the animal organism.
In this sense, the bonds that make up the compound give it a high boiling point, a high specific heat and the ability to behave as a buffering and temperature-regulating substance. Without leaving aside, the solvent properties of water make it the most used substance for the different activities of mankind, in the same way the metabolic system of living beings is governed by chemical reactions that are executed in an aqueous medium and that are important for the development and preservation of life. In this sense, the objective of this research is to make known the fundamental properties of water as well as its benefit to society and its importance in veterinary medicine.

GENERAL INFORMATION ON THE PROPERTIES AND USES OF WATER

Water is the most abundant liquid on planet Earth. It covers a large percentage of the earth's surface both in liquid form (oceans, seas, lakes, rivers) and in solid form (glaciers) and in gaseous form (in the lower layers of the atmosphere as water vapor). Water is a fundamental substance for life due to its properties resulting from its composition and structure.
It is also a simple molecule formed by three atoms, one of oxygen and two of hydrogen, joined by very strong covalent bonds that make the molecule very stable. It has an irregularly distributed electron density, since oxygen (one of the most electronegative elements) attracts electrons from both covalent bonds, so that the highest electron density (negative charge) gathers around the oxygen atom and the lowest (positive charge) near the hydrogen. The water molecule has an angular geometry, which makes it a polar molecule that can bind to many other polar substances. Water molecules have the ability to form four hydrogen bonds with many other water molecules giving them a tetrahedral structure in the form of an ordered lattice, which is responsible for their peculiar physicochemical properties.
As we have already mentioned, water has the ability to buffer and regulate thermal changes due to its high specific heat, keeping the body temperature constant, its high vaporization heat allows to eliminate, through sweat, large amounts of heat as a mechanism to protect the excess increase in body temperature.
On the other hand, from the social point of view, man needs water to carry out his vital functions, for hygiene and domestic uses, to prepare and cook food, to irrigate the fields, for industrial applications and in power plants, among other areas of society.

WATER AND ITS IMPORTANCE IN VETERINARY MEDICINE

Given the range of possibilities provided by this compound, its use in veterinary medicine is not surprising, since its importance lies in the development of the life process and, indeed, cell life depends on the cell's ability to maintain its volume and homeostasis.
Therefore, the organism is basically water in which a large number of solutes (proteins, vitamins, glucose, urea, sodium, chlorine, potassium, oxygen, carbon dioxide, among others) are distributed in the different cavities and regions of the body. Hence, water is essential for practically most of the functions of the organism and also its most abundant compound. However, although we depend on it, the body is not able to synthesize it in sufficient quantities or to store it, so it must be ingested regularly. For this reason, water is an essential nutrient in the diet in much greater quantities than any other nutrient. At present, organisms are known to be able to live without light, even without oxygen, but none can live without water. However, the loss of only 1-2% of body water affects thermoregulation and the cardiovascular and respiratory systems and limits them considerably.
For example, in the case of cattle, a decrease in the consumption of vital liquid leads to a state of hypovolemia and dehydration, understood as a pathology where blood or some other fluid is lost and consequently the pumping and functioning of the heart is hindered, which favors the development of pathologies due to weakness, fatigue and dizziness in the animal.
However, an abrupt ingestion of water by cattle leads to hypervolemia and causes pathologies such as water intoxication which generates convulsions, disorientation, hematuria and vomiting of water leading to sudden death.
Water conditions all the reactions of metabolism, intervening in many of these reactions as a substrate or as a product. For example, in digestion, hydrolysis reactions lead to the oxidation of macronutrients. They also conduct electric current (thanks to their high dielectric constant in ionic solutions), which is important, for example, in the transmission of nerve impulses. 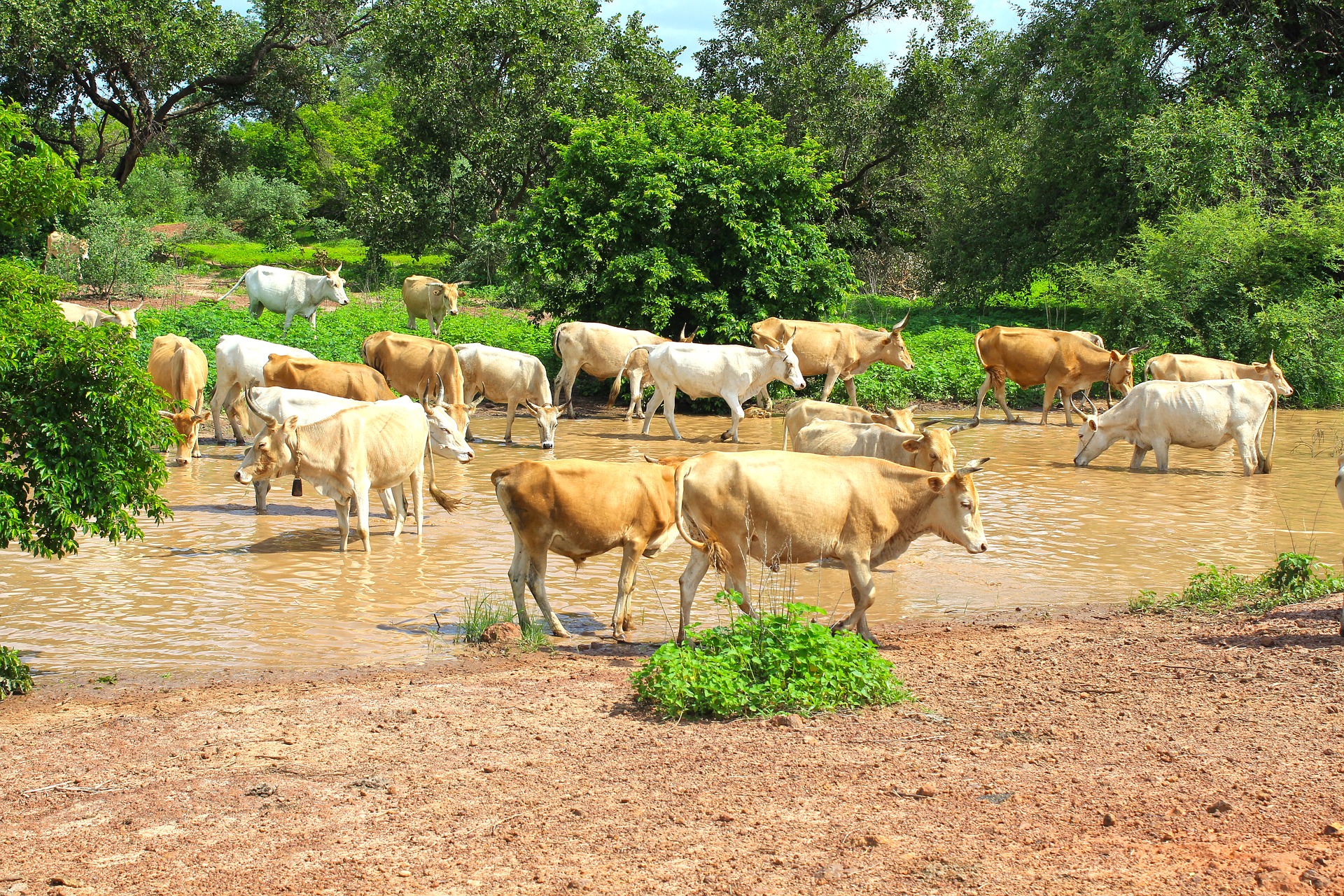 Water also contributes to the organization of macromolecules, since it not only maintains macromolecular structure but also mediates the recognition of molecules, provides communication channels through cell membranes, increases the mobility or flexibility of enzymes and facilitates enzymatic attack. Because of its high molecular cohesion, water is necessary to maintain cell volume, an important requirement for life.
In addition, an important point to bear in mind is that water is not found in nature as a pure substance, since it is combined with other dissolved chemical substances that in a certain way contribute nutritional and organoleptic qualities to this vital liquid, which is why water should also be considered as a food, another component of the diet, which contributes to the supply of certain nutrients.

Knowing the dependence that living beings have on water and the impact it has had on society and medicine, it is worth asking what makes it such a special substance and so different from others. Well, due to its composition and structure, water possesses a wide range of physical and chemical properties compared to other common substances, properties responsible for its efficiency in the homeostasis, structure and function of the cells and tissues of the organism.
Likewise, it plays a crucial role in the structure of DNA, since it binds nitrogenous bases and, in proteins, allows reversible changes that make their functions possible. Likewise, its physical and chemical characteristics are transcendent in its biological functions, especially those related to its solvent, transport, structural and thermoregulatory capacity. The thermal property of water is unique and because of it, this vital liquid is the main responsible for the thermoregulatory system of the organism, keeping the body temperature constant, regardless of the environment and metabolic activity.
Water is a molecule that can dissolve a great variety of substances (hydrophilic and hydrophobic), an effect that is also very important for life, thanks to its size and the polar nature of the hydrogen-oxygen bonds that make up its structure and its capacity to create hydrogen bridges.

1. The cover image was made by @madridbg, used public domain image.
2. For more information related to the areas of science, technology, engineering and mathematics, feel free to visit #stemsocial and #stem-espanol, communities that promote scientific advances in these areas.

Thanks for this information, I didn't know how water affects the nature of cells and tissues of an organism, allow me a few questions because I'm not very familiar with biology Lol:

According to my understanding of the introduction you wrote, you spoke about the bond with which the atoms of the water molecule are united (covalent bond), and in the next paragraph you said that the bond that makes up the compound gives it a high boiling point (I understand from this sentence that you are referring to the type of bond mentioned in the paragraph above), do you mean here a covalent bond? (which is considered as an interatomic bond). But when we speak of boiling temperature, the temperature of change of state increases with the intensity of the intermolecular forces (Hydrogen bond in this case, resulting from the electrostatic interaction between a very electronegative element like the atom of oxygen, with a hydrogen atom from another molecule). Therefore, you need to breakdown the intermolecular bonds in order to change one physical state into another.

I would be grateful if you would clarify this point about the bonds mentioned in the introduction.

Greetings friend @benainouna, first of all I apologize for the lateness of my response, with respect to your statements, we can hardly get a species that lives without oxygen or light from our planet, there I can infer that it was an error in the translation you make.

Regarding the types of bonds, we must be aware that water can generate hydrogen bridges at the molecular level (i.e. between its molecules), but as such the compound is formed with the union of hydrogen atoms and oxygen and this type of bond is covalent type strong enough to raise its boiling point to 100 ° C.

I hope I have clarified your doubts.
Greetings...

Thanks for answering Mr @madrodbg
It was not a translation sir, i made copy-past of your sentence: (At present, organisms are known to be able to live without light, even without oxygen) And here is a screenshot of the paragraph in which you mentioned that.

Water is always the first class that we learn in any biology class! Our cells are made mostly from water!
!1UP

Greetings @gwajnberg thanks for the support and appraisal on my publication. Regards

Water is indeed a very intriguing molecule and we can make a lot of interesting experiments with it. As a side note, did you know I use the context of water molecules for a question on one of the exams I held earlier this year? I have asked my students to characterise the electrostatic forces that appear when some water molecules are located close to an electric charge.

Cheers, and thanks again for this nice blog.

Greetings friend @lemouth, first of all thank you for stopping by and leaving your contribution.

With respect to the questions you ask, it is necessary to take into account that static electricity is assumed as a surplus of energy either positive or negative type, so that if a material charged with this type of energy, we put it in contact with water, the molecules would be attracted as if it were a magnet, products of the di-polar charge and moments of the water molecules.

What you wrote is definitely correct :)

Consequently, as you said, the molecule is always attracted by the charge (after a rotation to align the charges appropriately).

Greetings @stemsocial thanks for rating and boosting science topics on the #Hive platform. Regards