hillaryisidore in StemSocial • 2 months ago 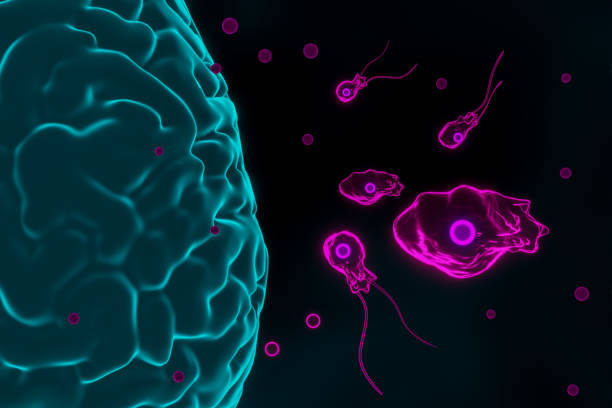 pixabay
Parasite are living things that depends on human or another host for survival. Parasitic infection can be very dangerous if not treated on time. The worst part of it is that, not all parasitic infection is curable. Some of them is life threatening and can lead to a severe complications.

Naegleria fowleri which is also known as brain eating amoeba, is a parasite that happens to be one of the most dangerous parasite we have. It is known to cause primary amoebic meningoencephalitis (PAM).
This parasite lives in warm fresh water like lake,pond, hot spring and river. I can practically say that this parasite lives virtually in all the water aside those that are being treated with chlorine.

Naegleria fowleri is a known thermophilic free living amoeba. That is to say that it can survive In a very hot environment without dying. One surprising thing about this parasite is that the more the temperature of the water rises the more the number increases.

Well, before we digress more on this parasite let's begin by explaining the life cycle.

Naegleria fowleri exist into three forms, the cyst, trophozoite and a biflagellate.

The trophozoite stage is the infective stage of naegleria fowleri in human. It act by attaching itself to the olfactory epithelium where it passes through the cell axon through the cribriform plate straight to the brain.

The trophozoite contains nucleus and travels by the help of pseudopodia

Coming to the last stage which is the biflagellate. This stage can be inhaled through the nostril when swimming or diving. This flagellate cannot exist in the tissue, it can only be seen in the cerebrospinal fluid where it releases it toxins.

Naegleria fowleri is known to cause fatal brain damage known as naegleriasis which can also be called primary amoebic meningoencephalitis. This parasitic infection is gotten through inhalation where it enters into the olfactory nerve. Most people do think that this infection could be gotten from consuming an infected water which is typically wrong.
It can only be gotten through the nasal cavity.

Naegleria fowleri is known to feed on bacteria, but in a case where naegleria fowleri infects human it's mode of feeding automatically changes. It now depends on human neurons and astrocytes to survive.

By now you must have understood the devastating effect of this parasitic infection on human. How this parasite destroys human by eating up their brain cells and causing death.

After being infected with naegleria fowleri, it takes about one to nine days before the symptoms starts manifesting.
The symptoms includes

As you can see, this parasitic infection is capable of killing within the space of two weeks. This shows you that it is extremely dangerous if contacted. Though it has been proven that this parasite cannot be transferred from one person to the other.

If really this parasite can be so dangerous like this, how can we possibly prevent ourselves from getting them.

This are some little tips👇

Avoid swimming in or jumping into freshwater lakes, rivers, or streams, especially during warm weather.
If you do plan to swim in freshwater, try to keep your head above water. Consider using nose clips or holding your nose shut with your fingers.
Try not to disturb or kick up the sediment when swimming or playing in freshwater.
Make sure to only swim in pools that have been properly disinfected

Naegleria fowleri is known to be treated with antifungal drugs like amphotericin B. This drug term to inhibit the pathogen by binding to it membrane.

Naegleria fowleri is a very dangerous parasitic infection we all should be careful about.

Knowing how this infection affects human is very important. This will enable us to know how we can make sure to see we don't get infected.

¶Five deadly parasites that have crossed the globe