What are zinc-air batteries, could they be the future of rechargeable batteries?

emiliomoron in StemSocial • 2 months ago
Hello dear friends of the Hive scientific community.

Zinc-air batteries have attracted the attention of researchers for a long time, and is that compared to the current lithium-ion technology that dominates the market, zinc-air batteries can deliver higher energy density, which translates into higher performance, in addition, they employ a zinc anode, a very attractive element since it is more abundant and geographically more dispersed than lithium, however there are serious limitations that have prevented them from displacing the current rechargeable batteries on the market. 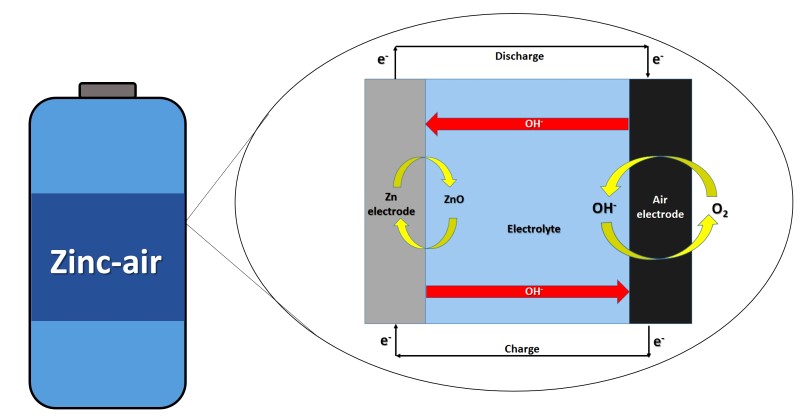 The zinc-air batteries are electrochemical cells that have a zinc anode and an air cathode. Source: @emiliomoron.

But what is a zinc-air battery?

A zinc-air battery is a type of metal-air battery, i.e., it is an electrochemical cell in which the anode is made of a metal (such as aluminum, iron, zinc, magnesium, among others) while the cathode is exposed to ambient air, and usually uses an aqueous electrolyte.

Basically, the zinc-air battery consists of a metallic Zn anode and a porous cathode separated by an alkaline electrolyte. Air penetrates the porous cathode and oxygen is reduced at the surface, while zinc is oxidized at the anode to zincate ions (Zn(OH)42-), producing electricity during this reaction. And theoretically during charging this reaction is reversed, with Zn being reduced and deposited at the anode and oxygen evolving at the cathode and being released back into the atmosphere.

Reaction at the anode:

Reaction at the cathode:

A typical scheme of operation of this type of cell is shown in the following figure.

Animation of the operation of a zinc–air cell. Source: Wikipedia.org.

These batteries have shown an attractive energy density of 1086 Wh/kg, lower than Li-air batteries (1910 Wh/kg), but zinc-air batteries have the advantage of greater compatibility with aqueous electrolytes, which gives them greater safety and lower manufacturing costs. However, the widespread use of this type of battery has been limited by several factors, on the one hand due to the electrochemical irreversibility of the zinc anode after repeated charge and discharge cycles, and on the other hand, carbon dioxide from the air tends to be absorbed into the solution, which reduces the conductivity of the electrolyte.

Challenges and future of zinc-air batteries

There is much interest in developing rechargeable zinc-air batteries, however, some challenges that this technology has presented must first be overcome, such as the slow kinetics of the chemical reactions involved in the process and the electrochemical irreversibility of the zinc anode. For the first of these, researchers have focused on the development of new catalysts for the air cathode, with the aim of conferring greater resistance while corrosion of the zinc anode occurs, and although they have managed to obtain great improvements, the problem of electrochemical irreversibility produced by the strongly alkaline electrolytes produce chemical instability and parallel reactions that continue to limit the useful life of these batteries.

But, a research team from the Changchun Institute of Applied Chemistry (CIAC) of the Chinese Academy of Sciences has implemented a different approach to solve this problem, and they have developed a high-voltage, high-performance hybrid zinc-air battery incorporating a neutral zinc anode, an acidic cathode and a double hydrophobic proton protection membrane to keep the two electrolytes isolated.

This research group succeeded in developing a stable electrochemical coating of highly reversible zinc on the neutral electrolyte, and found that employing an acid electrolyte solved the problem of carbon dioxide poisoning of the air cathode. And furthermore, using a specially designed dual hydrophobic ion conducting membrane to selectively transport hydrophobic anions effectively prevents proton crossover from the catholyte to the anolyte. 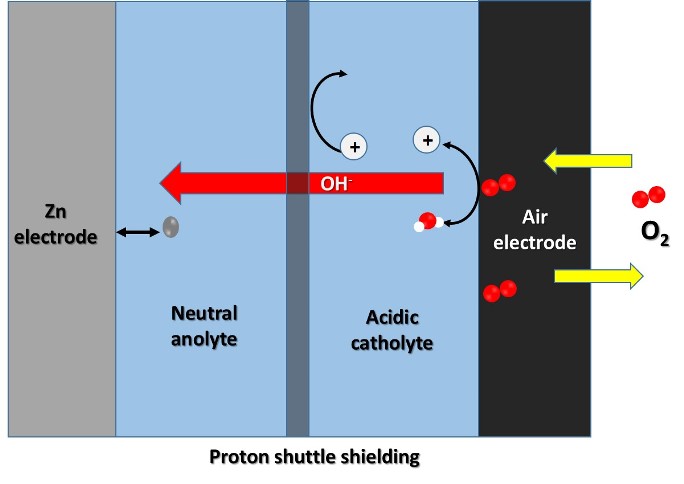 According to the results presented, this hybrid cell configuration was able to optimize the redox reaction at both the anode and cathode of the cell, and thus this hybrid battery delivered a working voltage of 1.5V and stable operation for 2000 h in ambient air, which can be considered a long lifetime.

Well friends, let's hope that the development of this energy storage system continues and we can have a new generation of sustainable batteries. See you next time!

It is always good to explain the science behind something that we use a lot, such as zinc batteries!! Thanks for the explanation
!1UP

It's great to know the working principle of things we even use on a daily basis, thanks to you for stopping by to read friend.