emiliomoron in StemSocial • 2 months ago
Hello dear friends of Hive.

As we all know very well, plastic pollution is a problem that has been accentuated nowadays, plastic waste has practically dispersed through different ecosystems, affecting especially marine fauna, not to mention that reducing the consumption of fossil raw materials is fundamental to mitigate climate change. In this sense, many researchers are making great efforts to develop polymers from renewable raw materials, such as non-edible vegetable matter. 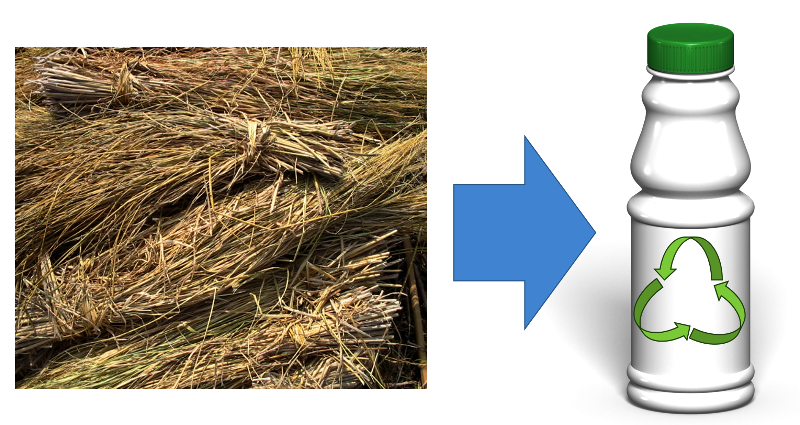 Many researchers are looking for ways to use biomass to produce bioplastics. Source: @emiliomoron, the image of the straw and the bottle are in the public domain.

Although great advances have been made in the production of biodegradable plastics from plant-based raw materials, there is a reason why they have not been competitive enough, and that is that conventional plastics have been difficult to replace due to their low cost, mechanical and thermal resistance, and characteristics that any material intended as a substitute must match or surpass, and until now that has been a real challenge.

However that could soon change, a group of scientists from the School of Basic Sciences at the École Polytechnique Fédérale de Lausanne (EPFL), have successfully developed a plastic with similar characteristics to PET from lignocellulosic biomass obtained from inedible plant matter; it meets the criteria to compete with several types of conventional plastics but is more environmentally friendly.

According to their research published in the journal Nature Chemistry, they were able to demonstrate the direct transformation of the hemicellulosic fraction of inedible biomass into tricyclic diester during fractionation of the raw material with glyoxylic acid.

The method is based on the addition of an aldehyde to stabilize certain fractions of the plant material and thus prevent its denaturation during extraction. In this way, the researchers were able to fix certain groups on both sides of the sugar molecules contained in the plant material that allow them to act as building blocks to assemble the long plastic molecules, and by keeping the structure of the sugar molecule intact within the molecular structure of the plastic, the processing of this substance is simpler than current alternatives. And by this method they were able to convert 25% by weight of agricultural waste into plastic.

Thanks to this method, the melt polycondensation of the resulting diester resulted in an amorphous polyester with glass transition temperatures between 72 and 100 °C; this temperature is a very important value as far as polymers are concerned, since it indicates the temperature at which a given plastic can be worked, which in turn defines its applications, and the values obtained are higher than the glass transition temperature of Nylon and close to the value of PED and polyacrylonitrile. On the other hand, it also presented high mechanical properties such as tensile strength of 63-77 MPa and elongations at break of 50-80%, and also showed a strong barrier to gases.

These properties allow this material to be processed by injection molding, thermoforming or extrusion, which would allow its use in applications ranging from food packaging, textiles and electronics, and could even be spun for use in three-dimensional printing.

Apparently this new material has very complete properties for use as a plastic, and although researchers say that standardized biodegradation studies have yet to be carried out, the presence of sugar molecules in the structure of the plastic facilitates its degradation by methanolysis at 64 °C and eventual depolymerization in water, returning to the environment a molecule that is already abundant in nature.

Well friends, let's hope that these alternatives to petrochemical plastics continue to advance and can offer a real solution to curb the pollution of the environment by plastics, while taking advantage of the residual biomass. See you next time!

Everyday we are close solve the plastic problem! Hopefully we arent late for that
!1UP

Let's hope that we can solve this problem soon and certainly that the solution does not come too late.

Let's hope that research like this will provide us with more environmentally friendly plastics.