Finding the perfect battery is very difficult, requiring a delicate balance between safety, energy density, fast charging, power, durability and sustainability, all at the lowest possible cost. That is why the race in the search for a battery that meets these requirements does not stop, and although lithium-ion batteries have allowed us to currently have devices and electric vehicles with greater autonomy, a more efficient and sustainable technology that could be the next generation of batteries is incessantly sought. But could sodium be the main element to replace lithium in batteries?

Sodium could be a good candidate to replace lithium. Source: @emiliomoron, battery image and periodic table are in the public domain.

At least in terms of cost and sustainability, sodium seems to be the right element to replace lithium. Suffice it to mention that sodium as an element is much more abundant than lithium, it can be extracted from the ocean and the earth's crust, which makes it economical and sustainable, very desirable characteristics for its use as the main component of batteries; however, sodium batteries have not been able to supply as much energy as lithium batteries, and present stability problems, so this technology has not been considered as a strong candidate to displace the dominant lithium batteries from the market.

But this could change because, despite the stability and energy density that lithium batteries deliver, their main disadvantage is that their main components, lithium and cobalt, are scarce and expensive. And as the demand for electric vehicles and electronic devices increases, manufacturers of batteries for these applications will need cheaper and more accessible materials to meet the demand, as lithium and cobalt will become more difficult to obtain, and this will obviously impact their cost. And since lithium and sodium are in the same group in the periodic table, being part of the alkali metals, this suggests that they may have similar characteristics that can be used for battery manufacturing. Sodium and lithium have similar characteristics exploitable for battery use. Source: edited image, original from Wikipedia.org.

How do sodium batteries work?

We could say that a sodium battery is a rechargeable battery that works in a similar way to a lithium battery, with the difference that the charge transport is carried out by sodium ions (Na+) instead of lithium ions (Li+).

In other words, the battery components and the electrical charge storage mechanism are basically the same, except for the ionic carriers in each. 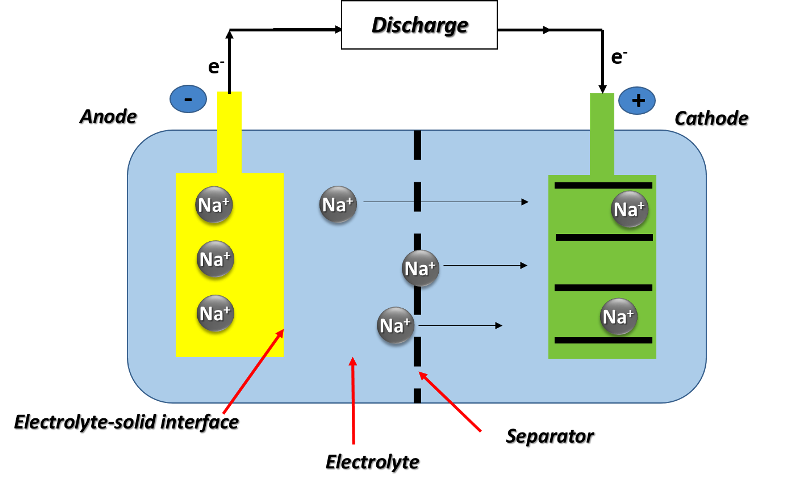 Schematic diagram of the operation of a sodium-ion battery. Source: image created in powerpoint.

In fact, sodium battery technology is not new, even its study began between the 70s and 80s, in parallel to the development of lithium batteries, but due to the success and rapid progress of commercial applications that used lithium technology, this system was eventually abandoned, that coupled with the fact that the technology of the time did not allow the proper observation and handling of sodium, limiting the performance of these batteries.

However, in the 80's, before lithium-ion batteries started to be commercialized, some American and Japanese companies developed sodium batteries as complete cells that used a sodium-lead alloy as anode and a NaxCoO2 compound as cathode, which despite having a remarkable cyclability, delivered an average voltage of less than 3 V, which did not attract attention compared to the 3.7 V delivered by LiCoO2 batteries.

On the other hand, Na+ ions (1.02 Å) are larger than Li+ ions (0.76 Å), which ultimately affects the transport properties and the formation of the solid-electrolyte interface. Sodium is also heavier than lithium and has a higher standard electrode potential (-2.71 V vs. -3.02 V for lithium); so the sodium-based system falls short in terms of energy density. But, driven by the growing demand for rechargeable batteries, the last decade has seen a revival of interest in sodium batteries.

The right electrolyte could change everything

A research team at Pacific Northwest National Laboratory recently developed a sodium-ion battery with far superior stability in laboratory tests. An ingenious change in the electrolyte components avoids the solvation problems at the solid-electrolyte interface that limit the performance of sodium batteries.

In any battery, the electrolyte is the medium that maintains energy flow; it is formed by dissolving salts in a suitable solvent, giving rise to charged chemical species that flow between the electrodes, establishing energy flow. But, with repeated charge and discharge cycles, the electrochemical reactions taking place in the electrolyte slow down or appear as side reactions that eventually decrease the performance of the batteries to the point where they can no longer be recharged, and this effect appears faster in sodium batteries than in lithium batteries.

But this research team designed an electrolyte capable of suppressing the dissolution of the solid-electrolyte interface, reducing the solvation capacity of the electrolyte and improving the performance of the sodium battery. The complete cell developed consists of a hard carbon (HC) anode and a NaNi0.68Mn0.22Co0.1O2 (NaNMC) cathode, abbreviated as HC||NaNMC, and with the new electrolyte they demonstrated that the cell maintained 90% of its capacity after 300 cycles when charged at 4.2 V; a very high value compared to previous records for most sodium batteries.

And although sodium battery technology still lags behind lithium-ion batteries, thanks to its greater advantages and the development of new electrolytes it could in the future become the most suitable option for light electric vehicles and energy storage from renewable sources. Hopefully, the development of new electrolytes will lead to more sustainable battery technology based on more abundant and economical elements.

Well friends, let's hope that in the future this type of research will provide us with the necessary technology to have more sustainable batteries based on more abundant and economical elements. See you next time!

This sounds feasible. I know next to nothing about chemistry and yet your discussion made sense to me. What I kept thinking about was the relative environmental impact. I know I've read before about the cost (environmentally) of mining material for batteries. This is the downside of renewable energy. Here's an article that talks about the cost, human and environmental, of mining cobalt.
https://www.sciencedaily.com/releases/2021/12/211217113232.htm

How does a sodium battery stack up against this? It's less rare, but does that mean it is lost costly (in environmental and human terms) to extract. And also, is there a disposal issue?

Certainly the extraction of metals for batteries has had a very high environmental and human cost, especially lithium and cobalt, so they are looking for more sustainable alternatives, this is the point in favor of sodium, it is more abundant and geographically more available, which means less environmental impact and lower cost, Let's remember that common salt is extracted from seawater, which contains sodium, however, its long-term environmental impact should be evaluated, since like any other human activity it has an impact on the environment, especially what its disposal implies at the end of its useful life.

Lithium batteries are not so bad though. @emiliomoron

Lithium batteries have brought us to where we are, but lithium is scarce and its extraction has a strong impact on the environment.

Wow. Now I see why they are so expensive

Since lithium is a better electrolyte in terms of durability.
Can't this electrolyte developed help reduce the solvation capacity of lithium, making it even better than what it is now?

There are also many studies that seek to improve lithium batteries, but the goal is to find a more economical and sustainable substitute for the next generation of batteries.

Thanks for the clarity.

Sodium is more abundant that lithium but the major set back is that its less reactive than lithium.

However, I think that hydrogen ion (H+) will be a perfect replacement to lithium. This is because hydrogen ion is more reactive than lithium and at the same time, its abundant in water and other compounds.

Or what do you think about the Hydrogen ion?

Actually hydrogen is used in fuel cells, which is a different technology from batteries that use metal ions, I believe that hydrogen fuel cells have a lot of potential and is currently seeking to improve the safety of these and to obtain hydrogen from renewable sources.

That's great. Many thanks for the feedback!

There is a lot to evolve in this type of battery technology! I hope that we could solve most of our problems in a near future!
!1UP

That's right my friend, there is still a lot of work to do, let's hope that in the near future we will have efficient and environmentally friendly batteries.

Thanks for the support friends!!