Maillard's reaction. The chemistry of a recipe

emiliomoron in StemSocial • 2 months ago
Greetings dear friends of the Hive scientific community.

Perhaps cooking enthusiasts like me will know that there are many factors that influence the preparation of a delicious dish, such as choosing quality ingredients and cooking them with the right technique, because we know that before we taste a bite, the aroma and appearance of the food influence our perception of the flavor.

And whether we know it or not, cooking foods also involves many chemical reactions that play a very important role in the development of the appearance and flavor of foods, and one of the most important is known as the Maillard reaction. This reaction is related to the appetizing aroma, color and flavor of traditional culinary processes such as roasting coffee, baking bread and roasting meats. 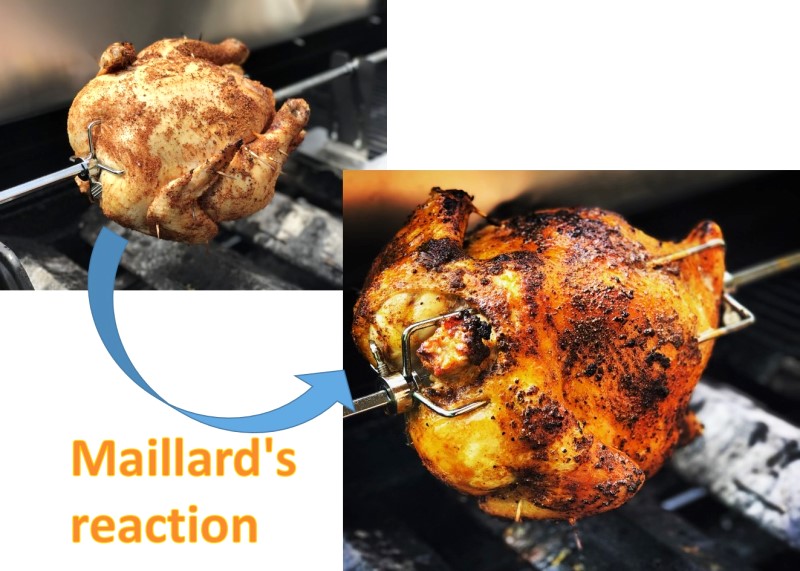 This reaction is responsible for the browning of food during cooking. Source: image edited by @emiliomoron using public domain images: 1 and 2.

In addition, during this reaction a significant amount of products of great nutritional value are produced, although there is also the possibility of the formation of toxic compounds, so the chemistry involved in this reaction is very complex and difficult to control, since it does not involve a single direct reaction but a group of diverse reactions.

In the present post we will try to make a description to give to know more about this reaction and its influence on the properties of food.

Technically the reaction corresponds to a non-enzymatic glycosylation process of food proteins, and comprises a complex group of chemical reactions where the production of colored melanoidins ranging from light yellow to very dark brown and even black, as well as different aromatic compounds, takes place[1]. It is basically a chemical process in which reducing sugars react with a free amino group from a protein, without the intervention of an enzyme.

The process takes place when food is heated or stored for long periods of time, as it contains enough sugars and proteins that can react with each other. That is why when we cook, the oven or frying pan provides enough heat for this reaction to take place quickly, which is why it is mainly linked to gastronomy, and we owe it to it that food browns or acquires that nice toasted color. We also owe it to this reaction that our kitchen is flooded with aromas, since during its course cyclic molecules are produced that provide aroma, although it can also produce carcinogenic substances such as acrylamide.

The chemistry involved in the reaction

The Maillard reaction is named after the French chemist Louis Maillard, who first described it, but it was not until 1953 that Hodge presented the first coherent scheme[2], which is shown in the figure below. 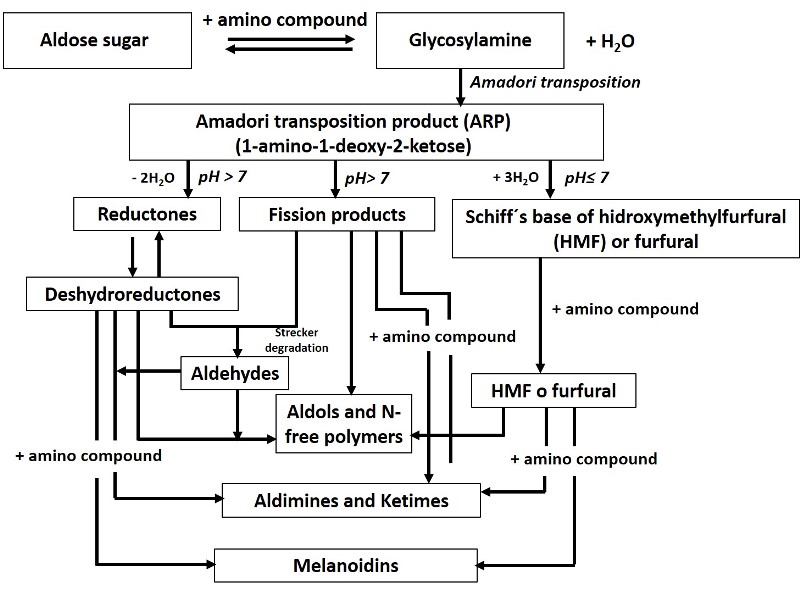 Diagram of the Maillard reaction. Source: adapted from Martins, S. (2001).

Fundamentally there are three stages, in the first one a reducing sugar condenses on a compound that has a free amino group (it can be an amino acid present in proteins) to give a substituted glycosilamine reorganizes its charges undergoing what is known as Amadori transposition. The next stage is the degradation of the Amadori product, which will depend on the pH of the system. At pH greater than 7, dehydration of sugars occurs, forming reductones and dehydroreductones, after which a reaction called Strecker degradation proceeds, producing aldehydes and ketones; a variety of fission products such as acetol, pyruvaldehyde and diacetyl are also produced. At pH 7 or lower, it undergoes mainly 1,2-enolization with the formation of furfural (when pentoses are involved) or hydroxymethylfurfural[2].

Subsequently, a series of reactions take place, such as cyclizations, dehydrations, isomerizations and rearrangements, leading to a last phase, where the formation of brown nitrogenous polymers and copolymers, known as melanoidin, takes place.

Influence of the Maillard reaction on food properties

The complexity and variety of products of the Maillard reaction has attracted the attention of scientists in various areas, it is easy to understand that for the food industry it is desirable to be able to control the properties and characteristics of foods, such as the color and aroma obtained from frying, baking or roasting.

Intermediate compounds produced in the intermediate stages of the reaction can undergo aldol condensation to form nitrogenous polymers whose brown color can range from light to dark depending on their average molecular weight. In addition, volatile and aromatic compounds that are associated with food odor are also produced during the reaction[2]. So the sensory effects of the Maillard reaction are important, as we are talking about the production of colors and odors. What mainly captures our attention of a dish. The appearance and aroma of food is the first thing that catches our attention. Source: Pixabay.com, image CC0.

On the other hand, this reaction can generate compounds both beneficial and detrimental to health. Among the adverse effects it has been mainly reported that compounds such as carboxymethyl lysine can be carcinogenic, it can also lead to the formation of free radicals and in addition, a loss of nutritional value has been observed due to the inactivation of amino acids in proteins[3].

On the beneficial side, the reaction products originating from the fructose-tryptophan model system have a high anticancer activity, and can also lead to the formation of antioxidant compounds[3], so it is also widely studied with the aim of protecting foods against lipid oxidation.

There are many factors that can intervene in the color and aromas obtained in foods, such as pH, temperature and protein content, which is why food scientists have had a lot of work exploring different aspects of this reaction, trying to find a balance between favorable and unfavorable effects, trying to minimize nutritional losses while achieving excellent flavors and maximizing the production of antioxidants. Understanding the Maillard reaction is a fundamental factor in any food industry.

Well friends, that's all for now, I hope you liked the information, see you next time!

Thanks for the support my friends!