Identification of a large set of cometary organic molecules

emiliomoron in StemSocial • 4 months ago
Hello dear friends of the Hive scientific community.

In March 2004, the Rosetta probe was launched into space, a probe developed by the European Space Agency (ESA) whose audacious mission was to orbit and study in depth the comet 67P/Churyumov-Gerasimenko between 2014 and 2016. This ambitious mission not only allowed us to see a comet so close for the first time, and to share a part of its journey through the solar system, but also to learn more about the chemical composition of these icebergs of the universe. Without a doubt, the Rosetta probe successfully completed several milestones in space exploration, sending us incredible images of a comet and its surface, and also providing important data on its composition, as thorough and detailed as never before obtained from any comet. And according to a study recently published in the journal Nature Communications, analysis of the data sent by this probe has identified a rich variety of organic molecules in the comet's coma. 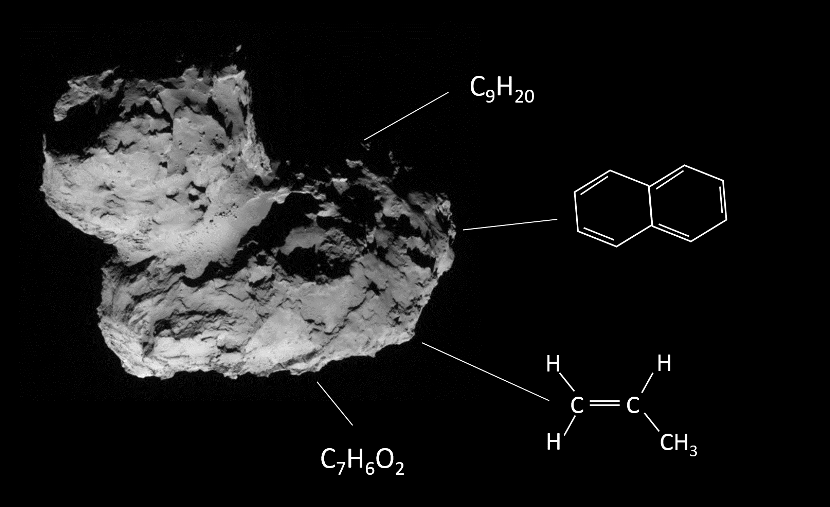 A wide variety of organic molecules were found in the comet's coma. Source: image edited in Powerpoint, original from Wikipedia.org.

Until recently it was believed that comets were composed of a mixture of aggregates, dust and volatile ices such as water and carbon dioxide, however, in the 1980s, during the last appearance of Halley's comet, this became the first comet to be analyzed in detail by space probes, and in addition to reconfiguring the hypothesis about the constitution of the comet, the presence of organic molecules could be observed, although the identity of these molecules could not be specified due to the capacity of the equipment used at the time.

But now, thanks to data collected by a team of scientists during ESA's Rosetta mission on comet 67P/Churyumov-Gerasimenko, it has been possible to identify a surprising wealth of organic molecules never before thought possible on a comet. We may well consider comets as the fossil remains of our ancient solar system, remnants lingering in space from the time of the formation of planets and moons, and our interest in them is based on the idea that many organic compounds, essential for life, were brought to Earth by comets that impacted it millions of years ago. And recently, a team of scientists from the Institute of Physics at the University of Bern analyzed high-resolution mass spectrometry data collected during ESA's Rosetta mission targeting comet 67P/Churyumov-Gerasimenko, a comet of the Jupiter family, and found a whole series of complex organic molecules on the comet.

The comet coma, that thin atmosphere that is produced on the surface of comets due to the sublimation of ice as it approaches the sun, had already aroused the interest of scientists to know its composition, and in 1986 a fleet of spacecraft was sent to explore this thin atmosphere and cometary dust on Halley's comet, but while the most volatile components could be studied, the precision of the equipment at the time did not allow a correct interpretation of the rarer and more complex compounds.

And in August 2015, when comet 67P/Churyumov-Gerasimenko reached its closest point to the sun, it created an outflow of dust and cometary matter large enough that the more complex and heavier molecules separated from the comet's orbit and were within reach of the new high-resolution mass spectrometers, such as the ROSINA-DFMS (Rosetta Orbiter Sensor for Ion and Neutral Analysis-Double Focusing Mass Spectrometer), thus being able to detect chemical species that had remained hidden in the cometary dust.

On August 15, 2015, the DFMS of the Rosetta probe managed to measure the release of gases coming from both the comet's nucleus and particles detached from the surface at a distance of 215 km. And after collecting and analyzing the data, it was possible to identify for the first time among the organic compounds detected: nonane (C9H20), naphthalene (C10H8) and benzylamine (C7H9N), also it was possible to identify molecules of benzoic acid (C7H6O2), which although it had already been reported in other studies with little detail, now it could be clearly identified with very strong signals. They even identified many species with so-called prebiotic functionality, including formamide, which are important intermediary compounds in the synthesis of biomolecules such as amino acids.

They were also able to identify for the first time molecules of ethylene (C2H4) and propene (C3H6), although the existence of the former was presumed by the study of comet 1P/Halley, it had not been confirmed until now, nor had the presence of propene been recorded before in any other cometary coma. And along with these, 40 other chemical species were detected, although some of them could not be confirmed conclusively because no reference data are available or their abundance is very low compared to the error signal of the equipment. 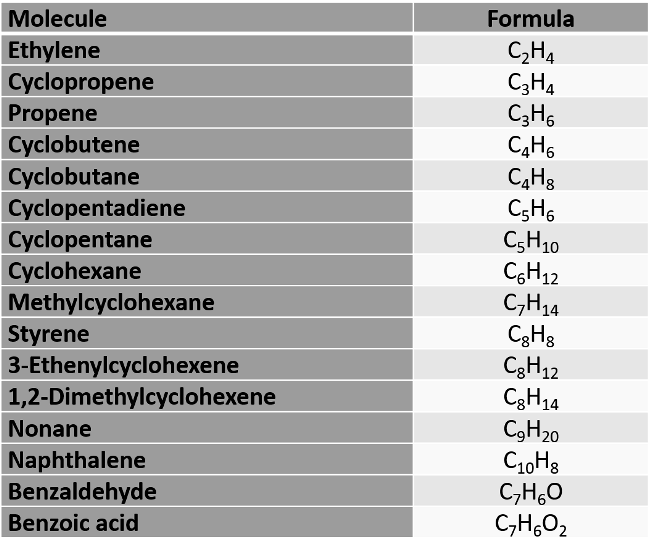 Some of the molecules identified in the comet coma of comet 67P.

And although on average, the inventory of organic molecules detected in comet Churyumov-Gerasimenko is similar to the soluble part of cometary organic matter, it was also very similar to the organic matter that rains down on Saturn from its inner ring, data reported by NASA's Cassini spacecraft, and which is even present in the birthplaces of new stars.

These findings are surprising, on the one hand supporting the theory of a pre-solar origin of the different organic compounds in the solar system, and on the other hand confirming that comets have indeed been carrying this material for a long time, even before the formation of the solar system.

Well friends, I hope you liked the information about the diversity of molecules found in this comet, see you next time!

Very interesting! Every day that it pass we find a new wonder in the universe! A new clue of what is out there
!1UP

That's right my friend, we are learning more and more about the mysteries of our universe.