Mathematics - All About Geometry (Part 3) This is the third part of my high-school refresher series on Geometry.
I suggest checking out part1 and part2 before this.

In order to easily specify where exactly a point or shape resides, we've defined various coordinate systems. Rectangular coordinates, such as the Cartesian Coordinate System, are the simplest format.

Let's first start with a single dimension, a line. Numbers can be written down on a so called Number Line, increasing right-wards and decreasing left-wards. Positive numbers are thus to the right of 0, whilst negative numbers are to the left of 0, as shown below.

On a plane, we use Cartesian coordinates, which are two numbers. Marking a point on two dimensions can be thought of as telling how far along and how far up it is. The left-to-right (or horizontal) direction is commonly denoted x, whilst the down-to-up (or vertical) direction is commonly denoted y, leading to the x- and y-axis correspondingly. Of course, these two axes are perpendicular to each other. The point where they cross is known as the Origin and denoted O.

To specify where a point resides within this system, we usually write a so called ordered pair. The horizontal distance comes before the vertical distance, the numbers are separated by comma and put within parenthesis. Starting off from the origin, it's possible to head in the opposite direction along each axis (x left, y down) yielding negative values. Thus, we can also have points such as (-10, 12) or even (-10, -12).

It's common to split the Cartesian space into four pieces, which are known as Quadrants. They are denoted by latin numbers in counter-clockwise direction, as shown below. Mathematically, we could increase the dimensions even more using that principle, but it's difficult to perceive shapes which can't be seen by us three-dimensional beings.

Trigonometry is a branch of mathematics which is all about triangles. It helps us find angles and distances, and has lots of applications.

One of the most interesting triangles is the one with a right angle (angle of 90°). The right angle is shown by a little box in the corner. Additionally, for any other angle θ of the triangle, the sides get specific names: 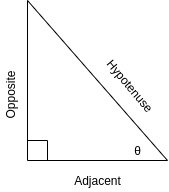 On a right-angled triangle and for any angle θ (but not the right angle), we can define the three main trigonometric fuctions from the side names, as follows: In the Four Quadrants, the values of the trigonometric functions have the following sign:

We also define inverse trigonometric functions, which based on the sin, cos or tan value, return the angle. These are:

Maybe the most important theorem of Trigonometry is Pythagoras' Theorem, which states:

or mathematically, if c is the hypotenuse:

There are two types of unknown values:

In order to find unknown sides, at least one side and one angle (not including the right angle) has to be known. If two sides are known, then Pythagoras' theorem can be applied directly. If not, then we of course have to choose the correct trigonometric function, so that the known and uknown sides, as well as the known angle are related.

For more information and examples check out part 2 of my trigonometry series.

Solving any general triangle is a little more complicated, but it can easily be separated into the following types of problems:

For more information on the solving part check out part 3 of my trigonometry series. There I also cover the Law of Sines (or Sine Rule), as well as the Law of Cosines (or Cosine Rule), which play an important role in solving them.

Some Trigonometric Equations and Identities are covered in part 4 of my series. These are basically various useful formulas which can be used in order to relate the trigonometric functions in a more complicated fashion. They are mostly used in Mathematical Analysis.

In the next part we will get into Circle Theorems and maybe even start with Solid Geometry...