Why would the workers on the floor of a drill rig have to know anything about engineering? 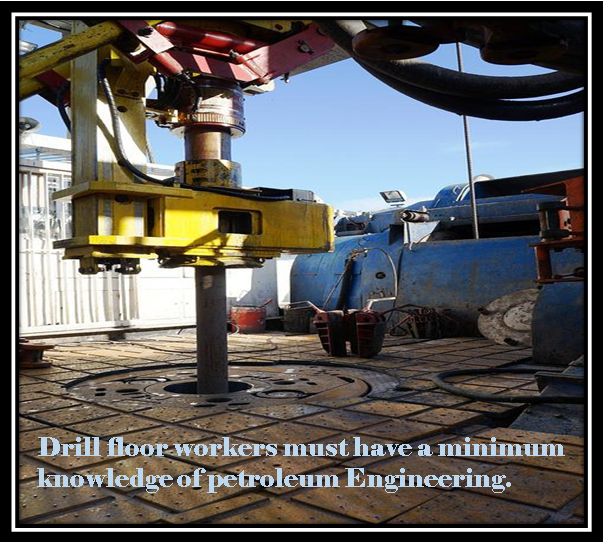 Hello friends of the hive.blog platform, in this opportunity I want to explain you some considerations under which the workers on the floor of a drilling rig should have at least a basic knowledge about petroleum engineering.

Not only the drill workers should have a basic knowledge of petroleum engineering, but also the driller and other supervisors who are in some way or another involved in the drilling and construction operations of an oil well.

The reasons why the workers on the drill floor should have a minimum knowledge of engineering are obvious, since many of the practical solutions associated with the problems that arise in a drill hole have as a solution the theoretical applications associated with mathematical calculations and physics that are studied in petroleum engineering.

There are many examples that can be placed for a deep understanding associated with this need, however the purpose of this post is simply to explain some simple and easy to understand examples that help the understanding of the importance of the drill floor workers to have a basic knowledge of petroleum engineering.

The first thing drill floor workers must know is that they must know the equation for calculating torque (also called moment), which is:

Torque= Force x Length of the arm or lever, which implies that if we apply it to the example it would be:

In the case that the workers have the knowledge to calculate the torque of the pipe, they would have to realize that the torque applied would be at the limit that supports such pipe, so if the force applied to screw all the pipes remains constant, then they would have to choose a hydraulic wrench with an arm or lever of less length, but that can generate a torque that is above the minimum torque so that the pipe is not badly screwed and can be released. The driller announces to the supervisor's cabin that he is not getting any drilling gauges and cannot tell how fast he is drilling, and all that is known is that 1550 ft of formation has been drilled in 50 hours, but the rate of penetration (ROP) needs to be reported.

For this case even though the drilling parameter gauges are damaged and if the driller has some basic knowledge of petroleum engineering, the following formula can be arrived at:

The penetration rate is an indicator that estimates the average drilling rate, i.e. in reality there may have been in the first hour of drilling a total of 50 feet drilled, but then drilled in the second hour only 25 feet drilled, despite this variation what it means is that 50 hours there is an average of 31 feet drilled for each hour elapsed.

It is very remarkable the fact that the working personnel not only on the drill floor need to possess basic knowledge about mathematical calculations and theoretical principles of petroleum engineering, but all the workers such as the cementer, wedgers, driller and supervisors must be multipliers of such knowledge, because even on such knowledge depends to a great extent the life of everyone at the location where they are constructing the well.

An example is the case when an oil well has to be controlled under an onslaught of gas and oil to the surface, where if the personnel do not have the necessary knowledge to control the pressure caused by the influx of oil and gas, an explosion can occur at the surface.