amestyj in StemSocial • 7 months ago
Dear readers, the ecological control of the fungus Mycosphaerella fijiensis in plantain cultivation for many years has become a great challenge for producers, due to the aggressiveness that it can have on the leaves of the crop affecting considerably the production. Possibly the limited implementation of ecological alternatives is due to the availability of synthetic fungicide producers, which can be effective, but increase production costs and pollution of ecosystems. Currently due to the lack of certain fungicides in our country Venezuela, some researchers and producers have begun to test alternatives such as sulfocalcico broth for the control of sigatoka. 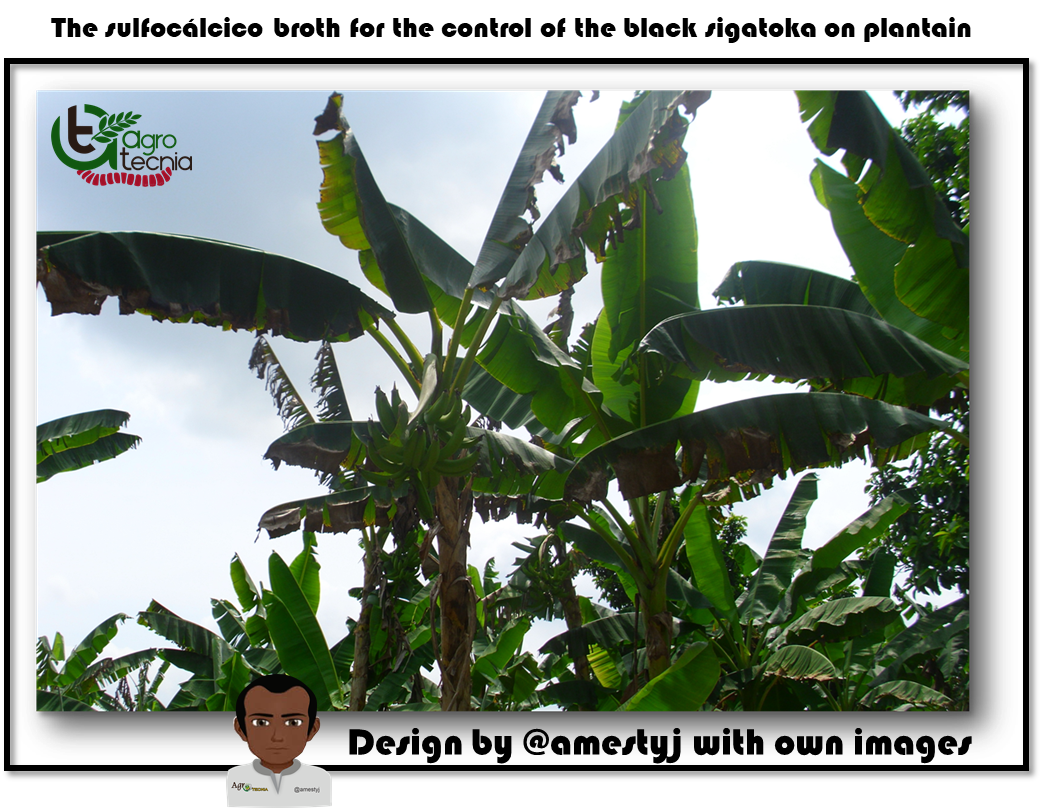 Below, we describe some important aspects related to the production of sulfocalcico broth. Let’s start!
The main ingredients of sulfocalcico broth are sulfur and agricultural lime, sulfur is an element that according to the World Health Organization is classified as slightly toxic, the WHO classifies it in category III as slightly toxic to animals and humans, has applications for the control of fungi and insects, and is an important nutrient for the development of plants, The agricultural lime can be said to be an amendment widely used mainly to neutralize the acidity of the soil and in turn can provide calcium to the plant, in addition to stimulating the development of roots and leaves. These two minerals have fungicidal action (fungal control), the active ingredient when mixing is calcio polysulfide.


For the production of 100 liters of this product the following ingredients must be used:

To prepare it is placed to boil the water, dilute the agricultural lime, then add the sulfur, at that time it will turn yellow, while the water continues to boil the ingredients continue to mix until it takes a vinotinto color, When taking that color is lowered from the heater and allowed to cool, to finish it is passed through a sieve to separate solids. With the collected liquid you can dilute 2 liters of the product obtained (sulfacalcium) in 20 liters of water which is the capacity that usually has the back sprayers. For every 200 L of sulphocalcico stock, approximately 10 hectares of banana cultivation can be served.
On the other hand, if you want to apply in banana crops it is important to determine the degree of severe infection by the fungus that have the leaves of the crop, for this, you can take into account the following description made by Stover and modified by Gauhl (1987).

In order to strengthen what was described about the effectiveness of sulfocalcico broth in banana cultivation, the students Jáuregui and Flores (2019) conducted a research at the National Experimental University South of Lake Maracaibo Venezuela UNESUR, where they evaluated the effect of different treatments for the reduction of black sigatoka on a farm in the area, among the methods they used were Purín of bovine manure, Sulfocálcico broth, native microorganisms and a control treatment without application of any product.
At the end of the research, they obtained as a result that the native microorganisms and the sulfocálcico broth are those that allow more leaves per plant, compared to the plants of the control treatment where there was a greater number of sick young leaves.
Dear readers, it can be evidenced that the sulfocalcico broth has the ability to control the severity of the black banana sigatoka, in addition to this, it is emerging as an agroecological alternative for this pathogen. In addition to this, good fertilization and cultural control, such as defoliation of the leaves most affected, can allow an adequate banana production to be maintained.

Thanks for the support dear friends

Thanks for the support dear friends

Thank you for the constant support, it is fundamental for us.