Some considerations of moringa as a forage crop

amestyj in StemSocial • 3 months ago (edited)
The oleiferous Moringa is the best known species of the genus Moringa, according to Foidl, Mayorga and Vásquez, (1999), it is native to the south of the Himalayas, the northeast of India, this plant has spread to a large part of the planet, and in Central America there are reports that it was introduced in the 1920s as an ornamental plant and for live fences. In our country Venezuela it can be found in various regions in a wild or cultivated way for the feeding of ruminants among other benefits that it presents, this plant species adapts very well to different agricultural and ecological conditions of our tropical ecosystems. 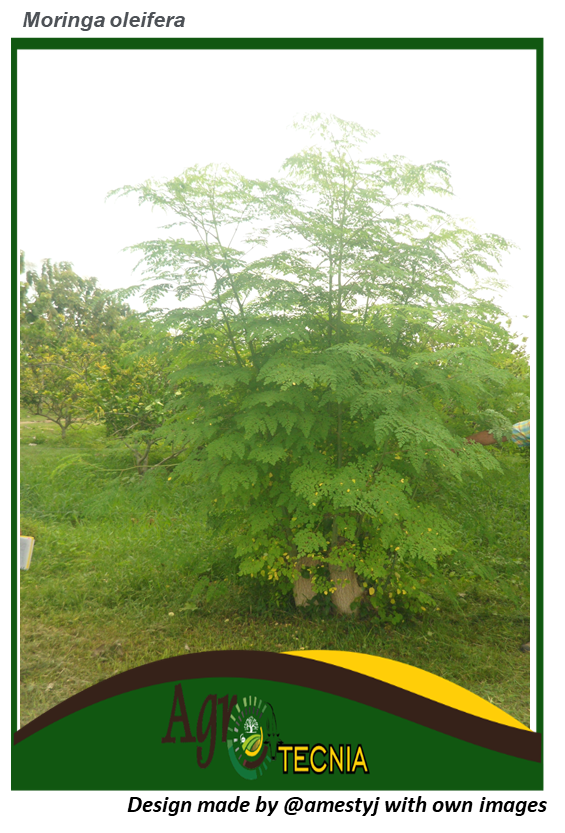 This shrub plant has a great nutritional value and adequate biomass yields, which make it a genetic material of plant origin that has a potential value for food and agriculture within agroecosystems, moringa is a forage oilseed, which, according to what was reported by Pérez, Sánchez, Armengol and Reyes, (2010), produces high yields of green biomass and dry matter with high protein content, vitamins and is diverse in its different medicinal and consumption applications. Moringa leaves can be used fresh or preserved for feeding ruminants.


It is necessary to find new sources of protein to meet the nutritional requirements of cattle to maintain milk and meat production, and according to Foidl et al., (1999), the fresh forage can be supplied to the animals with cutting intervals between 35 and 45 days or when it reaches a height of 1.20 to 1.50 m. When the feeding with moringa is started, it is possible that an adaptation period is required alternating the days in which it is supplied, since, according to the indicated by the aforementioned researchers, the anti-nutritional components such as tannins and saponins are minimal in the plant. In this same order of ideas, Garavito, (2008), mentions that not only the low contents of anti-nutritional components give importance to oleiferous Moringa in animal feed, but also the protein and vitamin contents can be an important supplement in dairy and fattening livestock, as well as in the diet of birds, fish and pigs, provided there is a nutritional balance. For its part, García (2003), indicates that the plant adapts to an approximate altitude from sea level to 1400 and rainfall between 300 and 1500 mm per year, as for the soils it adapts to a great diversity especially the loams with a pH range between 4.5 to 8, prefers neutral or slightly acidic soils.
To corroborate the quality of the forage biomass of the moringa DelToro, Carballo and Rocha (2011), after some bromatological analyses reported both in leaves and stems a high crude protein content of about 32% and the digestibility of the leaves in 79% and stems 57%. That is why, that a great diversity of investigations of the use of moringa as fresh and preserved fodder for cattle feeding have been carried out, some researchers point out that the extraction of nutrients from the soil is minimal therefore they do not deplete agricultural soils becoming another potential of the crop for planting in high densities and on the other hand, when it has been tested with the consumption directly with the animals, there was no decrease in the volumes of milk in animals compared to animals that were grazing and supplemented with concentrated feed.
Dear readers, the need to establish techniques that allow satisfying the nutritional needs of cattle is imminent, for example, in agrotechnics the mixed silage method has been tested with the use of grasses and moringa leaves achieving an excellent conservation result since, that there is a balance between fiber and protein, in future articles we will talk a little about this research. Hello @sumptuous, certainly moringa also has many benefits for humans, in the article only its attributes for the feeding of cattle are specified.

What even surprise me most is the power of Moringa in preventing and curing many diseases. The plant is naturally blessed to help mankind.

It's true @apunawu, moringa has many benefits for human health, which were not described in this article, but you can see that it is a plant that is also important for agricultural production.

Amazing ! What is this plant ranking in nutricional importance ?if there is
!1UP

Hi @gwajnberg, in animal feed grasses are funamental, but among the alternatives of forage plants moringa are in a good position together with legumes thanks to their protein levels, they should only be managed efficiently in balance with pastures.

Moringa is very useful for the health in so many ways

Hello @royalevidence, if there are many reports and research that show the benefits of moringa in human health, also as can be seen in the article it has great benefits for animal feed.