amestyj in StemSocial • 3 months ago (edited)
Dear readers, in the Lake Maracaibo basin, specifically in the southern area of the Lake, pastures constitute the main food for livestock, generally low-quality pastures, poorly managed, without considering the grazing cycle, among other aspects of interest. The restriction in the availability and quality of forage limits the production of ruminants, especially in critical periods, in which pastures noticeably stop their growth, in this scenario Klee (2003), mentions that low-quality forages are insufficient to cover the requirements that allow achieving acceptable live weight gains of grazing cattle. 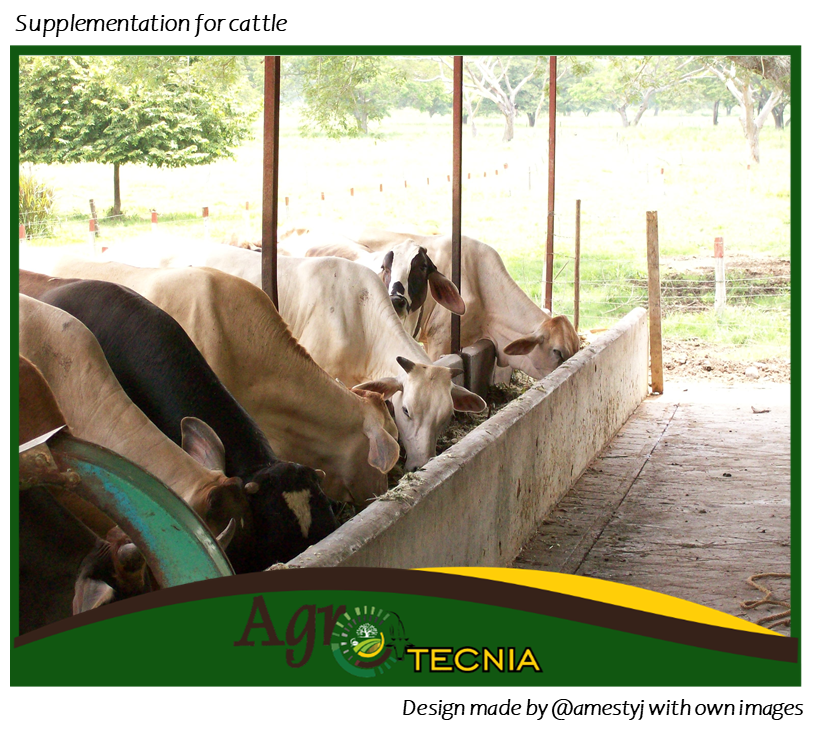 In the same way, it should be borne in mind in relation to the quality of tropical grasses that during periods of rain and high temperatures they grow rapidly and consequently the structural carbohydrates that make up the cell wall increase, that is, the forage is young and green with high nitrogen content, soluble carbohydrates and high digestibility only for very short periods. In other words, the nutritional value of pastures decreases rapidly with maturity, so under conditions of exclusive feeding based on pastures of dubious quality, the productivity of animals decreases.
In relation to the aforementioned, when animals are kept for meat production on low-quality pastures, there are limitations in terms of the expected daily weight gain, according to Parada (2007), the daily weight gain of Brahman breed mestizos that consume tanner pastures (Urochloa arrecta) during the rainy and dry season, on the farm: “La Aurora” fluctuates between 0.350 and 0.600 kilograms /day. With these daily weight gains, prolonged fattening periods have been observed, which logically results in high production costs with serious consequences on the profitability of the fattening system.


However, Lachmann et al. (1997), state that it is possible to achieve good feed efficiency in tropical conditions, through the strategic use of the existing forage potential, supplemented with locally available raw materials. Usually, due to the high cost that this represents in bovine production, it is essential that the producer rationally manages the supply of the same, and can obtain a higher productivity at a lower cost; in this sense, the strategy that had been used by the farmers was the supplementation with mainly concentrated foods, which becomes difficult to maintain and now it is imperative to know the nutritional behavior of the local resources available to make use of them.

In this order of ideas, the plantain is a herbaceous tropical fruit that has a nutritional value that lies mainly in its carbohydrate content, in addition, it is an extremely watery food. For this reason, Ly (2004), pointed out that this fruit can be used in animal feed as an energy source, and being enriched with urea would represent an alternative to cover the energy and protein deficiency that grass can present as a base diet.
Plantain is mentioned, because it is an abundant plant resource in the Southern area of Lake Maracaibo, whose composition characteristics make it eligible as an energy supplement high in moisture and low in protein, coupled with this, a source of non-protein nitrogen such as urea, it can be an excellent precursor to cover part of the protein requirements, as shown by research which confirms that when urea is added to a ration poor in protein, but with adequate amounts of easily fermented carbohydrates, bacteria quickly transform urea into protein.
Therefore, the use of local resources allows the design and planning of supplementation strategies that adjust to the realities of livestock ecosystems, to generate efficient productive responses. For all the aforementioned, it is necessary to diagnose the use of plantain and urea in the feeding programs of fattening animals, since, the forage quality sometimes does not become sufficient throughout the year in times of drought due to scarcity and in some cases as in the South of the Lake also in rainy season because the water content in the plant increases and in the same way the dry matter content decreases.
Dear readers, animal nutrition plays an important role in bovine production, given that there are various factors such as the growth and development of animals that are physiological processes of enormous importance, since all types of animal production depends on it and its efficiency determines much of the production process. Supplementation allows to correct unbalanced diets at different times of the year and before different forage bases.
Resources such as plantain and urea in animal feed are taken into account, since they are easily accessible for the producer, since banana production in Zulia according to CIPLAT (2007), corresponds to 70% of the national total, which means more than 50 thousand hectares planted, located in the Municipalities Sucre, Colón, Catatumbo and Francisco Javier Pulgar. Finally, it is also important to mention that the plantain that would be used is the one that producers consider as a discard that is not suitable to be marketed. Submit
0.00 STEM
Reply 9
Sort:
[-]
poshtoken  3 months ago
The rewards earned on this comment will go directly to the people sharing the post on Twitter as long as they are registered with @poshtoken. Sign up at https://hiveposh.com.
100%
-100%

Isn't this what they call a 'win win': The cattle thrive and there is possible increased profit for local growers of plantains.

A very important topic sheared, poor animal grazing has it effect not just on the animal but final consumer who consume meat for nutritional purpose could be affected on way or the other.

Greetings @mccoy02, certainly the quality of meat and milk could be affected together with other factors, therefore, we must keep well-nourished animals to express their best potential.

Greetings dear @newton666, thank you for the assessment you give to our content, we try to share some alternatives that we think could be viable, especially in areas where banana crop production is high.