Beneficial microorganisms as an eco-sustainable alternative for the propagation of forage seedlings.

amestyj in StemSocial • 2 months ago (edited)
Dear readers, in tropical regions, production systems need to incorporate species that improve the productivity and quality of the forage provided to the animals. In this sense, the study of trees and shrubs of the Leguminosae family has shown numerous advantages in the productive field in the livestock sector, especially those belonging to the genus Leucaena, which is given by its high protein level for animal consumption.
Seedling of Leucaena leucocephala Design by @amestyj, with images of his property.
It is important to point out that the establishment of leguminous plants such as Leucaena leucocephala in livestock ecosystems is generally done directly in the field or also by transplanting seedlings from nurseries, without any doubt, seedlings from nurseries are vigorous and can withstand after transplantation the onslaught of some pests and certain climatic factors that may influence the proper growth and development of the crop and thus be able to provide excellent quality forage for ruminants.
Therefore, using an excellent nursery substrate with beneficial microorganisms on the growth and development of Leucaena seedlings can become a technically feasible alternative to achieve a progressive change from conventional agriculture to agroecological agriculture in terms of the propagation of bush forage crop seedlings.
The methodology used and the results obtained in a research conducted by Amesty, Pineda and Dume (2020), where they used efficient handmade microorganisms as substrate in nursery to know their effect on the growth and development of seedlings, will be shared below.

The implementation of this type of technology began in the 1980s, when the researcher Teruo Higa, professor of horticulture at Ryukyus University in Okinawa, Japan, wanted to demonstrate that through an anaerobic fermentation process a series of substances such as lactic acids, amino acids, vitamins and others are produced. If you want to know in detail how is the elaboration of this type of alternative, I invite you to visit the following audiovisual publication where the elaboration of beneficial or efficient microorganisms is carried out step by step.

Visual illustration of how the beneficial microorganisms were handcrafted. For the establishment of the experiment a completely randomized block design with 04 replicates was used, each replicate consisted of 30 polyethylene bags, 6 bags for each treatment, which were as follows: T0: 100% C.V, T1: 75% C.V - 25% M.B, T2: 50% C.V - 50% M.B, T3: 25% C.V -75% M.B T4: 100% M.B .The blocks were located in a space within the nursery of the Universidad Nacional Sur del Lago, where 120 polyethylene bags of all treatments were distributed and the sexual seeds of Leucaena were placed for propagation, each bag representing a basic unit in each block.
Experimental design For sowing, Leucaena seeds were collected from plants located on farms in the area, from mature fruits (pods), seeds were selected with characteristics such as dark brown color and free of perforations caused by insects, In addition, their quality was tested by submerging the seeds in a container with water, discarding those that float, since these are considered unsuitable for germination. The selected seeds underwent a physical scarification process, which consists of submerging them in water for 24 hours.
For propagation, 03 seeds of Leucaena per bag were placed, all the material planted in the nursery received daily irrigation in the morning hours to maintain the necessary humidity for germination and development of the new seedlings, when they reached an average height of 7 cm, thinning was carried out to leave the most vigorous one in each bag. No fertilizer was applied during the entire experimental period.
Leucaena seeds Emergence: these indicators were determined as a percentage, based on the total number of seeds sown in the bags for each treatment; observations were made daily during the first 22 days after sowing. 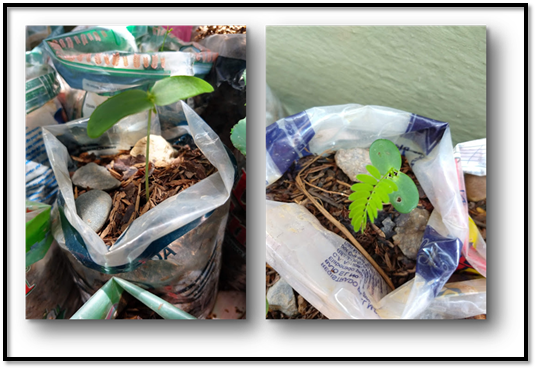 Design by @amestyj, with images of his property.
Height: from the moment of sowing after 30 days, the height of twelve (12) seedlings of Leucaena per treatment was taken every two weeks, the measurement was made with a graduated ruler placed in a vertical position on the soil surface, taking as data the value that coincides with the apical bud of the central stem. Design by @amestyj, with images of his property.
Stem thickness: it was measured with a vernier at the midpoint of the seedling height, from 30 days after planting, the information was collected every 15 days. 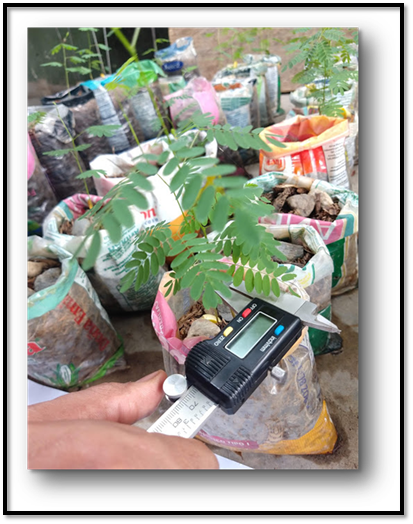 Design by @amestyj, with images of his property.
Root length: root length was determined 30 days after planting and on a monthly basis. Root length was measured with a graduated ruler, from the base of the stem to the coping Design by @amestyj, with images of his property.
Regarding germination and emergence in nursery Solorio and Solorio (2008), recommend using a good substrate containing topsoil and sufficient organic matter, substrates with considerable amounts between 20 to 50 % of organic material can improve moisture retention and aeration, which could possibly have considerably influenced the germination and emergence of Leucaena seedlings in the treatments with 25, 50 and 75 % of efficient microorganisms, since they contain adequate amounts of organic matter.
In terms of height, a better height was obtained in the treatments where beneficial microorganisms were used as substrate, which could be related to what Urbano (2008) mentioned, concerning substrates that, when enriched with adequate amounts of organic matter, can improve aeration, drainage and the progressive presence of nutrients, In the case of the inoculation of efficient microorganisms, a material rich in fiber such as rice husks is being contributed to the substrate, which together with the proliferation of microorganisms would be a source of nutrients for the plant with the gradual decomposition of the organic material and can also play an important role in the structure of the substrate used.
Similarly, with regard to the variable stem diameter and root length, it was observed that as the proportion of the substrate with beneficial microorganisms increased, a greater number of stem diameter and better root development were achieved, which could be attributed to the structure of the substrate, considering that the base of the substrate was a fibrous structuring material such as rice husk, which provided greater porosity and therefore facilitated root growth and development.
Seedling development in the different treatments 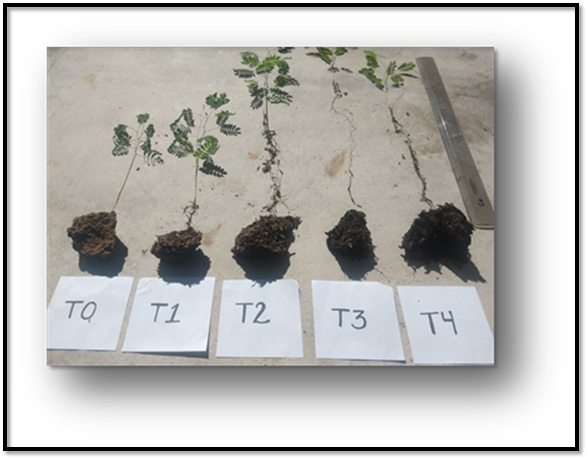 Design by @amestyj, with images of his property.
Dear readers, one of the elements that could favor the characteristics of the substrate was the presence of rice husks as mentioned above, since Urbano (2008) points out that materials such as rice husks decompose slowly maintaining the stability of organic matter, which can improve the characteristics of the substrate. On the contrary, if straw or sawdust had been used with efficient microorganisms, an accelerated decomposition could have occurred, which could cause a decrease in the volume of the substrate, turning it into finer and more compact particles, which affects aeration, among other characteristics.
Aguirre, J.; Coss, A.; and Velazco, M. (2015). Growth of Leucaena leucocephala (Lam.) De Wit inoculated with mycorrhizal fungus and nitrogen-fixing bacteria in nursery. Mexico.
Alarcón, S. (2016). Growth of Leucaena leucocephala seedlings in nursery stage with organic fertilization. Unpublished graduate work. UNESUR, Zulia.
EM Technologies. (1996). EM application manual for APNAN countries (2nd ed.). Arizona: EM Technologies.
Mármol, J. and Morillo, D. (1997). Leucaena cultivation and utilization in tropical cattle ranching. Maracaibo: Corfonluz.
Rodríguez, S.; Vergara, M.; Ramos, J. and Sainz, C. (2002). Germination and management of tropical forest species. Veracruz: Fondo sectorial CONAFORT-CONACYT.
Urbano, P. (2008). plant production engineering. Madrid: Ediciones Mundi-Prensa.
Wencomo H. (2004). Evaluation of 50 accessions of Leucaena spp. at the nursery stage. Rev. Pastures and Forages, 27(4). It is always good to locate local resources that provide us with a balance in agricultural ecosystems, and to reduce a little the conventional practices that can break the balance that exists naturally through some processes.

See you later my friend, have a great weekend.

Thank you, dear friends, for your support.