Is Beauty the Flip-Side of Entropy?

alexanderalexis in StemSocial • 5 months ago (edited) 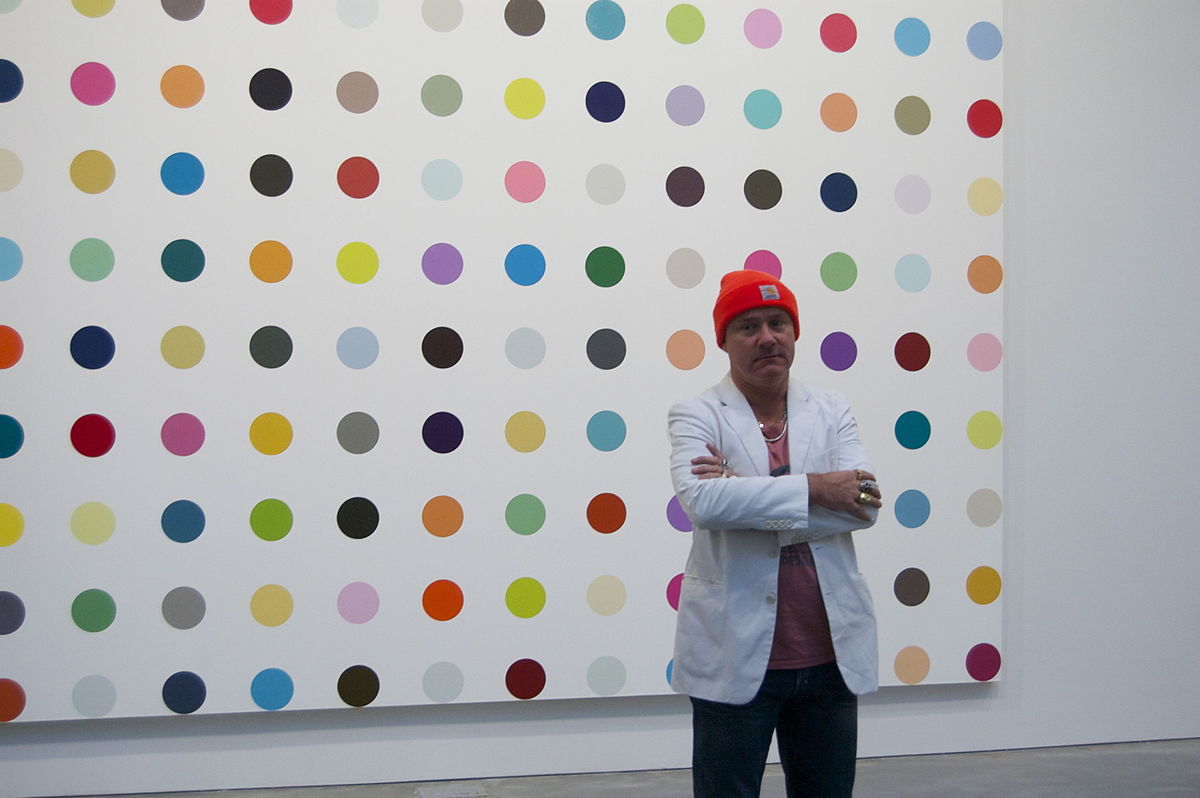 Was Damien Hirst trying to colorfully depict the ultimate state of the universe?

Entropy — What is it?

If you prefer watching, you could check out this TEDx talk where popular chemist Peter Atkins does his best to depress you, or impress upon you the inevitable reality of the second law of thermodynamics.

But if you prefer to read: the second law of thermodynamics states that the entropy of a closed system never decreases with time. In plainer terms, this means that a closed system (say, everything that physically exists taken as a whole) never becomes more ordered as time goes by. In even plainer terms, this means that kids left alone in a room will not make it less messy by the time they're done with it. Of course, the room might ultimately become less messy, but that's because the kids and the room aren't really a closed system, but they're in fact an open system that allows parents to come into the room and tidy it up. This is what all rooms with kids in them are destined to look like.

See any similarities with the Damien Hirst painting?

So it is with life. Normally, as a whole, the universe is becoming more disordered as time goes by. But then how has life been able to evolve—in other words, become more ordered—as it went along? The answer is that biological life is not a closed system. It's an open system that gets free energy from the sun. As a whole, existence tends toward disorder. But in the meantime, and in part, we can have small and rare pockets of order.

Now that we got our entropy 101 out of the way, we can move on to how beauty fits into all this.

Beauty — How does it fit? 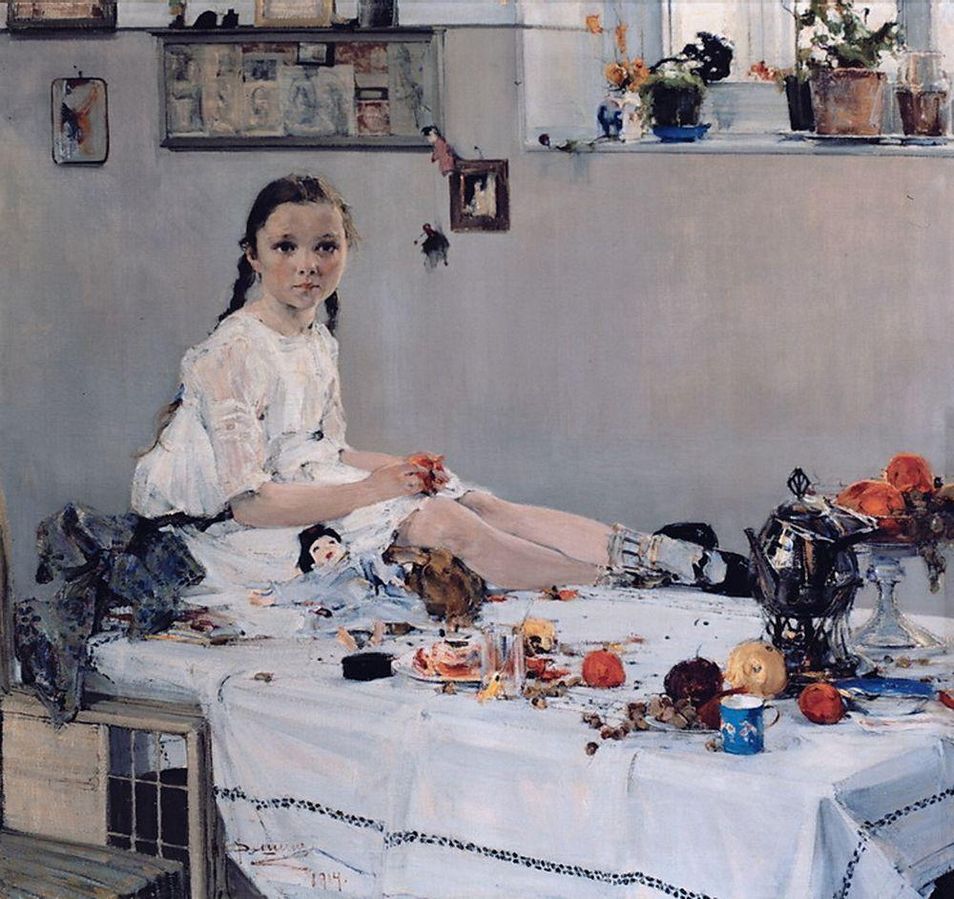 A fechin' example of non-entropic art, though I much prefer his drawings.

More abstractly—and I don't just mean in an abstract painting kind of way—you can imagine the universe as a bunch of randomly arranged billiard balls sitting on a billiard table. Some parts of the green cloth might have tight arrangements of billiard balls on them, and some might be completely empty. Ultimately, the second law of thermodynamics demands that the billiard balls be equally spaced throughout all the available area. Every atom will be at a distance from every other atom, so that nothing will interact with anything, and everything will be dead. If you think the picture that heads this article is beautiful, then you'll think entropy is beautiful (you nihilist you!)

But why do you think these things are beautiful? Or, in other words, why do you enjoy looking at order?

Here's a possible answer from the mouth of Winston Churchill:

To build may have to be the slow and laborious task of years. To destroy can be the thoughtless act of a single day.[2]

If Churchill's not your English cup of tea, here's another one in the same vein by Tariq Ramadan:

Criticizing to destroy is easy, thinking in order to build is much more difficult to achieve.[3]

Don't like reading quotes by people you don't know? Then how about this one by Nelson Mandela:

It is so easy to break down and destroy. The heroes are those who make peace and build.[4]

By now you've probably figured out that many people came up with the same basic insight. Even you might've quipped a couple times about how easy it is to destroy someone's trust and how difficult it is to build it.

Let's move a little bit closer to art, since we're talking about beauty. If you ever tried drawing with charcoal, you know how easy it is to remove hours of work with a careless sweep of your sleeve. Tibetan Buddhist monks who make sand mandalas make an active practice of this, spending hours on creating a sand mandala just to destroy it with a couple motions at the end. This ingrains the transitory nature of life into their minds and trains them psychologically in the ways of non-attachment. Well, another way some try to explain entropy is with statistics. For anything that's ordered, there's many more ways it could be disordered, so chance alone will favor our moving toward disorder. All the quotes I gave above, by Churchill and Mandela and such, emphasize how easy it is to destroy, and how hard it is to create. This can be explained with statistics: there's a massive number of ways a painting could be destroyed, and only a much smaller number of ways it could be created. So if you want to do the easiest thing, you should destroy it.

But who values easy? Who values the statistically common?

Economists equate rarity to value. It's called scarcity value. The more rare a thing is, the more valuable (usually). If a comet made of gold crashed on Earth to give us stupendous deposits of it, the price of gold would also crash. A paper investigated "whether rarity (pure scarcity) itself has a market value"[9] by investigating the case of collectible coins. Their results?

In other words, only a Leonardo can make a Leonardo. But any jackass can destroy a Leonardo. Therefore, we like Leonardo more. (I know this isn't the best attempt at a syllogism you've ever read, but it will do.)

And this isn't my idea. Well, I thought it was, when I read a passage in Steven Pinker's Enlightenment Now, a book with which the famous psychologist and intellectual argues that the world's better now than it ever was (and he's right). In a passage, Pinker mentions a quote by Texas lawmaker Sam Rayburn: "Any jackass can kick down a barn, but it takes a carpenter to build one." Pinker quotes him amid a discussion about entropy, and so a light bulb went on in my head. But then, several pages later, Pinker states the idea (my idea!) explicitly:

One reason the cosmos is filled with so much interesting stuff is a set of processes called self-organization, which allow circumscribed zones of order to emerge. When energy is poured into a system, and the system dissipates that energy in its slide toward entropy, it can become poised in an orderly, indeed beautiful, configuration—a sphere, spiral, starburst, whirlpool, ripple, crystal, or fractal. The fact that we find these configurations beautiful, incidentally, suggests that beauty may not just be in the eye of the beholder. The brain’s aesthetic response may be a receptiveness to the counter-entropic patterns that can spring forth from nature.[10]

Granted, I fleshed it out more than he did, but you can see the kernel of the idea was there.

Why do so many people not like abstract art, like the one leading this article? (Except if you're using the pattern for a bathroom curtain, of course.) Because it looks like the kind of thing anyone could draw. It looks like the result of randomness, entropy. Such works are often compared to the scribblings of a child, or a monkey, or the stilt-prints of a circus performer who accidentally stepped into some paint.

Evolution has sculpted us not only to be instances of order, but also to appreciate order outside of us. The more random something looks, the less it catches our attention. But order is evolutionarily interesting: it could be food, it could be a predator. "Interesting" is a word you'll often hear used by art appreciators: it's a good thing if someone finds your art "interesting". It's a good thing if, as a job candidate, you catch an employer's eye, or if you have the level of physical attractiveness that grabs people.

The more orderly something is, the rarer it is—statistically, mathematically, second law of thermodynamics-ly. The more something tends toward chaos, the more common it is. It's also easier, because it takes less energy to achieve the state of chaos. So little energy, in fact, that you don't even have to do anything to destroy something, all you have to do is wait for the second law of thermodynamics to do its thing. If you don't have the time, then maybe expend a little energy to move things along (sand mandala, prepare to be destroyed!) But the most difficult of all is to increase order in the universe.

I'm not trying to equate beauty to entropy completely, of course. Alls I'm sayin' is our taste in beauty can be at least partly explained by it being the opposite of entropy.

See you in the next one!

In mathematics there are plenty of chaotic systems that are beautiful :3 Meet the tinkerbll attractor, it is a chaotic attracter generated by the tinkerbell map
https://en.wikipedia.org/wiki/Tinkerbell_map

I'm not trying to equate beauty to entropy completely, of course. Alls I'm sayin' is our taste in beauty can be at least partly explained by it being the opposite of entropy.

I see you are truly working hard at philosophizing everything you hold dear including beauty!
Kudos for coming up with a good mix of chemistry, art, and philosophy!

Indeed! I'm a philosopher by training, but even moreso by disposition, so I can't help it!

Ultimately, the second law of thermodynamics demands that the billiard balls be equally spaced throughout all the available area. Every atom will be at a distance from every other atom, so that nothing will interact with anything, and everything will be dead. If you think the picture that heads this article is beautiful, then you'll think entropy is beautiful (you nihilist you!)

In fact, physics tells you that what you said is a possibility, but not the only one. There are indeed possible other scenarios for the evolution of the universe, with different fates.

I know I killed the charm of the post with my physics comment. Apologies for this! But on the other hand you tried to kill Leonardos… ;) More seriously, I enjoyed the blog. Ordered or non-ordered, that’s the question after all!

Thanks for reading and for correcting!

I think you can find quite a lot of information on this Wikipedia page. That should be a good start (Wikipedia is often very good to start anything). Then we can further discuss if you have specific questions. Note that this is a bit far from what I do, but I can try to answer any potential question.

Your post has been manually curated by the Stick Up Boys Curation team!
Because we love your content we've upvoted and reblogged it!
Keep on creating great quality content!

Congratulations @alexanderalexis! You have completed the following achievement on the Hive blockchain and have been rewarded with new badge(s):