What Is Cannabis Tissue Culture?

dajohns1420 in WeedCash Network • 6 months ago 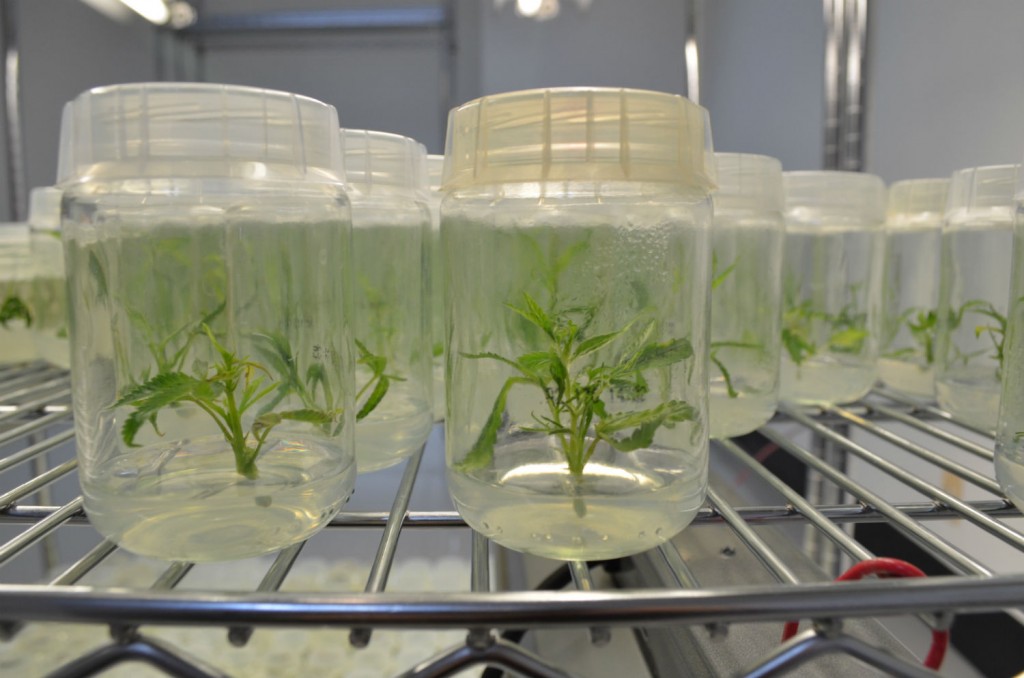 Even if you have never heard of it, you have benefited from tissue culture. You have most assuredly eaten/smoked plants propagated this way. It has been widely used in the commercial fruit business, but more recently has been adopted by most large farms growing just about anything. If fact the process is used in 80% of the produce sold in big box stores, and it's quickly becoming essential to the commercial cannabis industry as well.

What Is Cannabis Tissue Culture?

You are probably somewhat familiar with the process of tissue culture, possibly even done it yourself-even if you don't realize it. It's been used since the end of the 19th century to grow cells from samples of tissue of everything from fungi, to cancer cells, to obviously plants. Samples are were grown in glass, and eventually plastic, just life you did with fungus in science class. I am 90% sure Mark Zuckerberg was grown in a petri dish this way. This has been incredibly useful in scientific research in virtually every field, and led to many breakthroughs in medicine via single-cell reproduction TC made possible.

The process was eventually adapted to plants(also called micropropagation) where a sample is taken in a very sterile, and controlled environment, then placed in a sterile grow medium, in a glass beaker. Once these cultures have been propagated successfully, the plants are placed into a more natural environment to grow. This process has increased crop yields in poor countries, saved plants from extinction, and decreased the cost of many foods, and other consumer products drastically. But that is only the tip of the iceberg. TC has helped create the modern world, and all of it's conveniences. Here is a great video of a woman showing several species of plant that were once very rare, but are now more common, with many more people able to enjoy their beauty.

Besides the obvious benefit of only needing a small tissue sample to propagate a plant, the amount of space that can be saved storing genetics this way is really a game changer for large commercial farms(10x's the plants in 1/10th of the space). This alone would be enough for most of them to adopt it, but there are many other benefits. Some finicky varieties will see more success with TC opposed to traditional clones, and the super sterile environment makes TC clones noticeably more disease resistant than there cut counterparts. The genetics also stay consistent for substantially longer. Also, according to Emergent Cannabis Sciences CEO, Jones Hope, tissue culture cannabis has higher yields.

My personal favorite benefit of TC is the fact that it makes it easy to keep genetics. That we won't lose them to time, and over-breeding. Though seed companies deny it, I swear that several of the strains I grew up loving are extinct, and live on in name-only slapped on some wannabe breeder's in-bread cannabis love child. 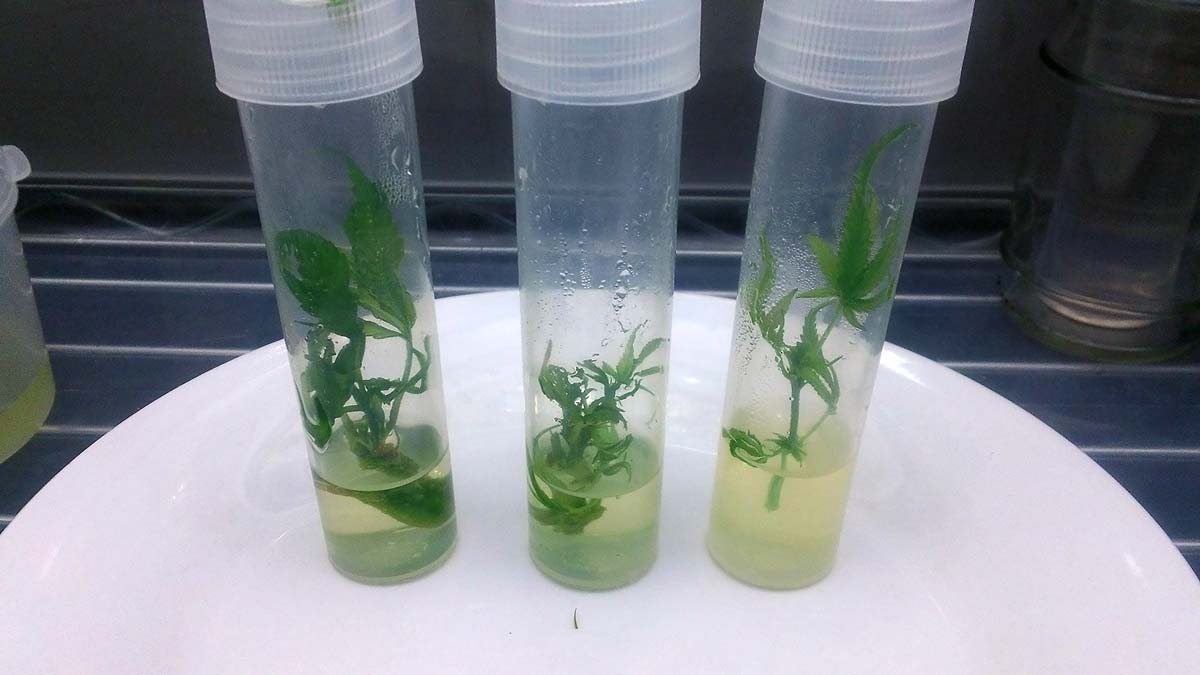 It does require more labor, and obviously money. In large operations, the upfront costs pay for themselves quickly. For small farms, or hobbyists, it might not be the most cost-effective way to go. It's not incredibly expensive, and you only need a small sterile environment, but when you only need a few clones every few months, it's probably not economical. It is however a great skill to learn, especially if you want to work in commercial cannabis in the future. It seems to me that every large cannabis company will be forced to start practicing TC culture if they want to stay profitable in this highly competitive market.

A cutting from a mom will obviously grow faster. Even factoring this, the efficiency and scalability of TC more than compensates in most commercial settings.

While the success rate is high, there is a small chance the process triggers a second metabolic chemical reaction -making for some deformed, or even dead babies.

If the plant you are taking the sample from has any abnormalities, or disadvantageous traits, these will for sure be passed down, sometimes amplified, during the TC process. Some strains adapt better than other. Some get comfortable in their highly controlled, super-sanitary environment, and don't seem to take it well when moved into the more natural environment of the flower room.

Tissue Culture Is The Future

Whether or not you plan on experimenting at home with TC, if you work in cannabis, or plan too in the future, you should be at least acquainted with the process. Those of us familiar like using the scientific terminology to sound intellectual, and better than you, but it's really not that complicated. It's been done for decades, and is involved in just about every area of agriculture. so don't be afraid to buy a home TC kit, and try growing your own ...I mean cannabis clone.

Get FREE BTC and lotto tickets every hour! Best Faucet out there by far, and I've tried them all

The same faucet as above, but for FREE Litecoin!
https://free-litecoin.com/login?referer=1512100

Find Me On Odysee and LBRY!
[https://odysee.com/$/invite/@globohomo:e

Leave me a tip!

bro!!! is the first time that i read this theme, i wanna see the progress in the next post :D

Great read! Like I said to you before, I recently just discovered this not to long ago, and I am intrigued. Not sure if you have heard of the company Phinest, but they have clones at the local shops that are from TC, and they advertise them as growing faster, and being more resilient to pests, and dieses. I really hope I get my hands on one of them.

SO true about people slapping labels to try to cash in on famous strains. So many fakes out there. Its been a while since I have read up on this, so it may not be true no more, but did you know that the cookie fam never has released a clone, or seed of there cookies? And we all know how many cookies are out there! Lol But not to say the fakes are not good, but it is crazy how many greedy people do try to scam.

Thanks! Everyone claims to have cookie family genetics, but few do. They license them to few people, and will sue anyone using them. That's why we called it "Forum #7 at true harvest lol. My boss got a clone from someone in so-cal and thats how we got it. It was very similar to verifiedcookie Ive had from dispensaries in cali, but there is no way to know if it's genuine really.

I think a lot of top notch breeders are only going to sell their stuff as TC. The future is comjng quick. Crazy how fast things change.

It sure is! And hopefully Weedcash/Hive is apart of it in a big way:)

I think the problem with tissue culture for the masses is that you require very sterile conditions to do it properly, otherwise, the agar is a perfect environment for malicious organisms like spores, mold, and bacteria to breed. It's been used in agriculture for years prior to cannabis production, and I feel like there's a lot to still figure out with tissue culturing, as in if this is a viable way to clone autoflower genetics.

Yeah it definitely hastbto be sterile. They make littlw boxes that makr it pretty easy to creat a small sterile enviornment. For enthusiasts its probably easier to clone ghe traditional way, or buy TC clones

Yup, laminar flow hoods. One of these days I'll have a room I could probably try to convert to a sterile space to do tissue cultures, but I agree, most use cases at home would probably be better off with the classic clone tech.