W3C and the Ethereum Foundation Attacking Bitcoin... and Decentralisation?

Yesterday was a sad day for Bitcoin but also for the rest of the Crypto space. W3C is a conglomerate of Businesses and Foundations which are responsible for the supervision and development of the Internet Standards, such as HTML, XML, etc.

Last year, Microsoft had submitted a proposal for a new Standard: DDID - Decentralized Digital Identity. This would allow the development of Apps making use of Decentralized Identities. Stuff like linking a Wallet to an App or Website would be more simple and would be done in a Standardised way.

W3C, this group of rats - which includes the Ethereum Foundation (why am I not surprised?) - has rejected the DDID proposal claiming that POW (Proof Of Work) systems waste too much energy and they will never accept such systems to be Standard.

Basically, they are resurrecting the same old FUD narrative that has been debunked thousands of times and comes back to life every 4 years... W3C are joining the boatload of institutions pushing the Renewable Energies Narrative. Oddly enough, while they claim this is an Ethical Decision, they throw into the river all the other Ethical Principles they were supposed to uphold:

This move suggests that Ethereum is very Centralised and its already in bed with the institutions it were supposed to go against. Now it has confirmed just that, by participating on an attack specially directed against Bitcoin but which also affects every other Cryptocurrency and Project out there.

This is almost like stabbing themselves on the belly in order to try stopping the success of their main opponent.

This makes the developments on top of the Bitcoin main layer and on the Layer 2 solutions a lot more difficult... but the fight goes on. I really hope that Ethereum is surpassed by Cardano soon enough. These guys have just proved they are on the side of the Status Quo, Banksters and Nation States... e against the individual freedoms. Not that I believe Cardano is a lot better... but Ethereum falling to the 3rd place of the Market Cap would suit them well. 😏

#VitalikTheTraitor, this moment won't be forgotten. At the end of the day, this is all a fight of interests. On one side we have the Status Quo pushing for POS Bockchains, because it is a system they are sure they can control; on the other side we have Bitcoin, Monero and other POW Blockchains, something that the Elites cannot control, no matter how much money they own.

So far, Bitcoin has been attacked over and over again... and the size of the attacks have been scaling up. The last ones were made by Elon Musk, then China... and now W3C. If Bitcoin keeps going on stronger and stronger after each attack, the possibility of stopping this train gets smaller and smaller everyday.

You already know me. I'm always rooting for those who defend Freedom... and Bitcoin represents exactly that, freedom from a rotten and corrupt system, the pursue of the sovereign individual and financial control for everyone. The next years and even decades will be a full on war by the Cypherpunks and Freedom Fighters against the Establishment. Let's see how things play out.

I'm not surprised by this.
This is a financial war.

There is such an expression in Russia: "I will freeze my ears to spite my grandmother." This is exactly the position that Ethereum has shown

Yeah, I am surprised to see them working against the whole industry. They should have been pushing for these changes to be accepted for all, not just for POS systems, which is where they are heading to. 🤔

On one side we have the Status Quo pushing for POS Bockchains, because it is a system they are sure they can control; on the other side we have Bitcoin, Monero and other POW Blockchains, something that the Elites cannot control, no matter how much money they own.

How is it that the elites can control a POS blockchain but not a POW blockchain? In my understanding, a lot of money allows someone to buy a lot of equipment and dominate in hash power. Whereas with POS, presumably someone with money can find ways to get a large stake (as happened with Justin Sun buying a heavily discounted massive stake in STEEM), but then the community can fork into another blockchain, which is how the Hive blockchain was born. How do you see this? Can you inform me some more on the superior decentralization of POW blockchains?

Those are interesting questions... and much can be said about it. I'll try to sum it up though and my answer will likely be very incomplete.

With POS, all you need is to get your hands on a large stake, as you say. Since most coins are left on Exchanges, these Exchanges can even make an attack without having to buy anything. They already control that stake, after all. We're just praying they are honest and don't use it against us. Now, imagine that a Government takes control of an Exchange and forces them to attack a network? That also doesn't take a lot of money, just violence.

With POW it's a whole different scenario. In theory, a Government could buy a lot of rigs and control over 51% of the Network. Why is that very difficult with Bitcoin, if not impossible?

For all these reasons, POW is an extremely resilient system and with a magnitude of strength and security over POS systems, which are a lot easier to attack.

I hope this helps.

OK, thanks for the elaboration.

How would a POW network adjust if someone were to acquire a majority hash rate? Even if they migrate to a new chain, how could they prevent the hash rate owner to use and have the same influence on the new chain?

In regards to POS, the things you pointed out actually did happen last year - the exchanges staked their STEEM and helped a single actor take control over the network. So all of us forked over and created the Hive blockchain. And we implemented some tweaks - when someone stakes their tokens (which allows participation in governance), it takes one month before their stake can be used for governance decisions. So this should prevent exchanges from interfering with governance.

And again, even if someone manages to take control of a majority or very substantial stake and acts in a way that the community doesn't like, the community can create a fork and make it so that the new chain doesn't have that actor's stake.

Hive has done a great job at showing the way forward for POS chains. 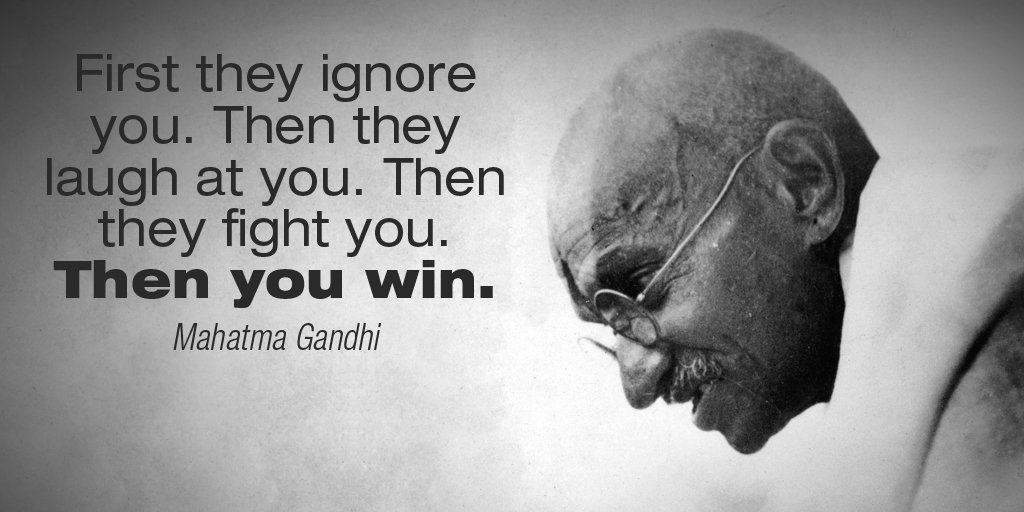 It got quite obvious that we are in the Fighting stage, now!

This quote should define the whole story in the end when dust settles.

@trincowski! I sent you a slice of $PIZZA on behalf of @pixresteemer.

Did you know Pizzabot speaks Spanish if you use the command ESPIZZA? (6/10)

Yay! 🤗
Your content has been boosted with Ecency Points, by @trincowski.
Use Ecency daily to boost your growth on platform!

Covid-19 is The Great Reset

Why is this the choice when we have Hive?

Congratulations @trincowski! You have completed the following achievement on the Hive blockchain and have been rewarded with new badge(s) :