travelingmercies in Hive Book Club • last year
I study Physics. However, even with years of studying the different concepts in this branch of Science, I still find myself lost with the complexity of what should just be simple. I have loved this field because of its aim to understand the different phenomena in Nature in the most simple way.


The language of Physics is Mathematics. When you want to talk about velocity, energy, force, and things alike, you would need to speak the language used to describe and study them. I think, most people are discouraged or intimated of pursuing a career in Science because they didn’t want to learn its language. I, too, sometimes think how difficult Math is to learn and to master. But, my learning years (although still short) have taught me that the more simple the solution is, the more elegant it is. This is also the reason why one of the famous equations in Physics, E = mc2 is really looked upon with great admiration. I like the simplicity of it. It’s famous that a lot of books with titles bearing that equation are seen in libraries and book shops. In my wishlist of the books I want to read, there’s this same title “How to Understand E = mc2”, unfortunately, the book sale had this book with another author. I bought it anyway, there’s always something to learn in books you know. 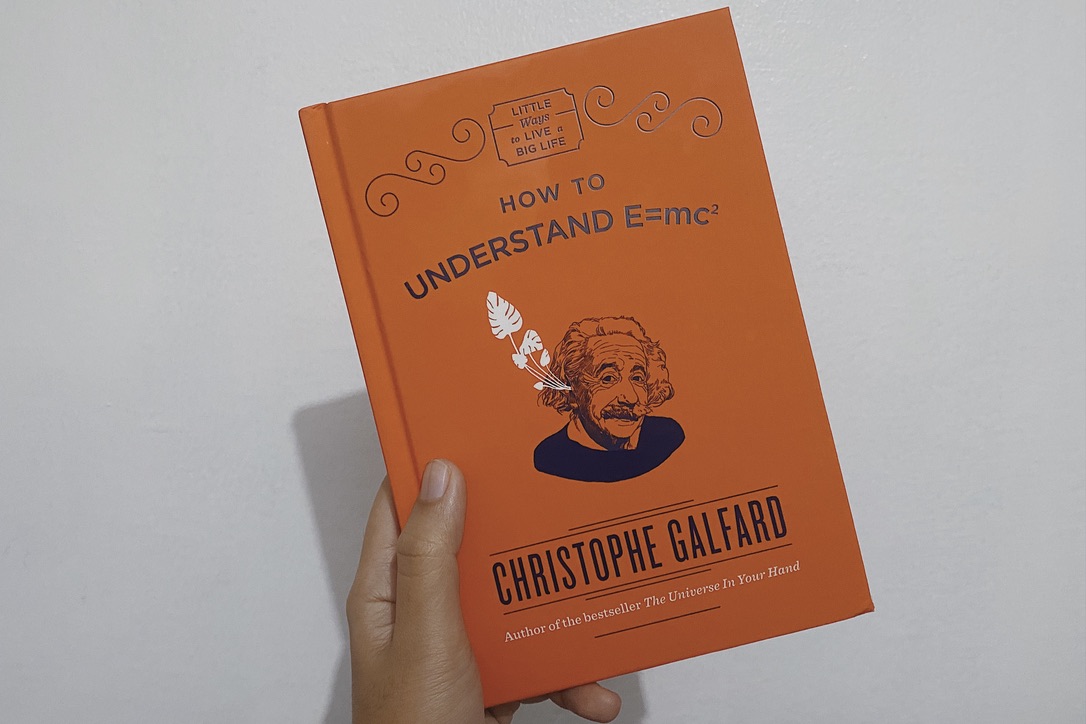 This book authored by Christophe Galfard was part of the book series Little Ways to a Big Life which sounds like it’s for little children who wants to know about the big world. I’d say that this book could pass as a children’s book since it’s free of jargons that only people working on Science would understand. This book of Galfard, even with limited pages, was able to convey insightful knowledge to anyone who’s curious enough of this famous equation. Kids who had a poster of Einstein’s portrait in their rooms would love to read this book. Galfard’s in-depth knowledge of Physics didn’t hinder him to explain the simplicity of how energy is related to mass (an idea that people in the 20th century didn’t expect to have any relevance), as he has the ability to explain difficult ideas with simple words. I believe that the Science community should be able to communicate what they learn and know to the general public, as to not boxed Science. This was greatly manifested in the 50-paged book of Galfard. He presented a brief history of how this equation came to be, illustrated the concepts in the way a person who had drove a car can relate to, and put it together, simply, the things that were changed because of this knowledge that lies in this simple equation.


The book is divided into three parts: Light, Theory of Moving Objects, and Consequences. It gives a generous and simple way of understanding what light is, how objects behave and move as it approaches the speed of light (which is very fast!), and what can we get when this phenomenon occurs. The book also covered the topics of antimatter, which is fairly popular in Science Fiction movies and books, and the atomic bomb, which is written in our History.


This book is just one of the books that arrived last week from my latest Big Bad Wolf haul. I'd be sharing more in the next weeks or months about the other books that I'll be able to read (hopefully!). Stay safe and well. 🤓☺️
#review #books #reading #neoxian #science #hiveph #discovery-it
last year in Hive Book Club by travelingmercies
100%
-100%

I never encountered this book, but it seems you had an interesting. I might check out an electronic book for this one. !discovery 15

It was very informative and entertaining at the same time. Hope you'll be able to read it too. :)