sahiba-rana in Architecture+Design • 6 months ago

The science which connects the people with the structure is not valued as it should be. We all appreciate aesthetic appearances, functionality and designs of a building/structure but little do we know about the other spiritual and scientific effect of a structure.

Hello everyone, I was about to come up with a post regarding my new work which I just stepped into but yesterday I came across a video on social media which depicted the effects of sound on varied mediums like fire, water etc and by the end they mentioned structures, which triggered something in me and I went all around youtube to know more about it and found various videos which has something or the other useful information.
considering this new learnt information should reach as many people as possible because more you share your knowledge it tends to increase.
So, here's a little blog about how scientifically structures effects our body. 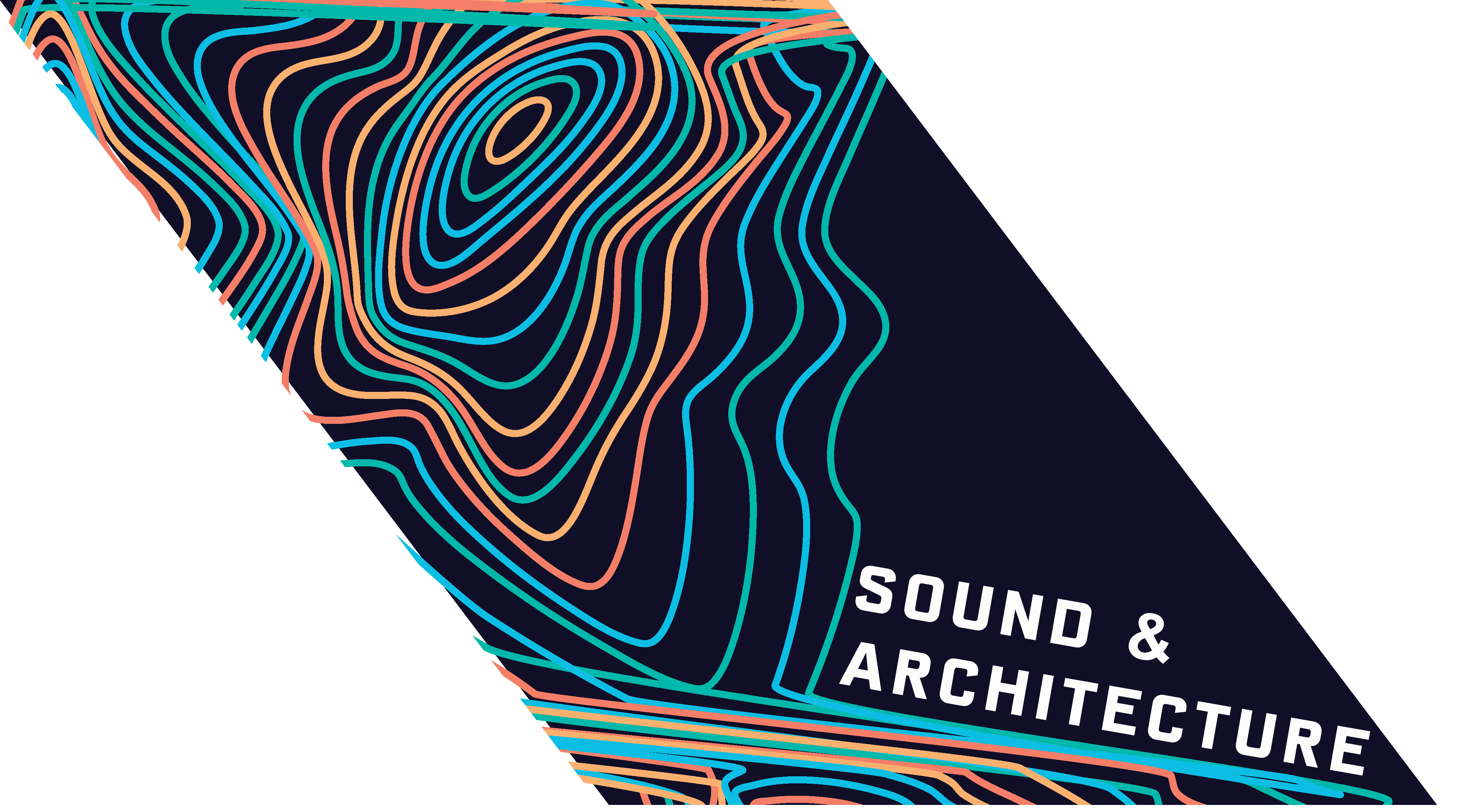 Just go on a valley or rocky mountains and shout loud, you will hear your voice back sometimes multiple times that's called echo! We all must have learnt about it in school but there's more to it than we know. Open spaces tends to revert back sound waves lesser than closed spaces. It's a proven fact and today I will be taking the architecture of Temples into account for this particular phenomena.
I am a believer in God and may be you are or not let's put that aside for a moment and talk about IDOL worships in an enclosed temple. Idols are made up of rock and rock contains the tendency to revert back sound waves. Src
These kind of temples have shikhara that is the top part which is high elevated and yes I am talking mainly about Dravida style of Architecture which is mostly found in South Asia.
Sound's reverberation is found in cosmos and sound has form when sound can have effects on elements, cosmos so why not on we humans? Yes it does and that is scientifically proven. I would like to state as many facts as I can since this subject needs major limelight.

The Core Analysis
What happens in temples is chanting and chanting of those mantas and phrases which have a very logical meaning and certain wordings which brings certain positive vibrations which soothes the body. have you been to Buddhist temple or tried that bowl with a stick which one revolves around the bowl to create certain vibrations which are told to be healthy for spirit and mind.
So, the temple's Architecture is such that shikahara wherein the rock idol is placed is enclosed air tight no ventilation just one source and that is the entry door with leading corridor. I always wondered why did people in past didn't included some kind of ventilation source here in the main chamber, the reason now I know is the chanting sound waves gets echoes and reverted back multiple times (due to enclosed space) and is directed towards one and only opening i.e door where people stands and they get the most soothing and healthy vibrations . 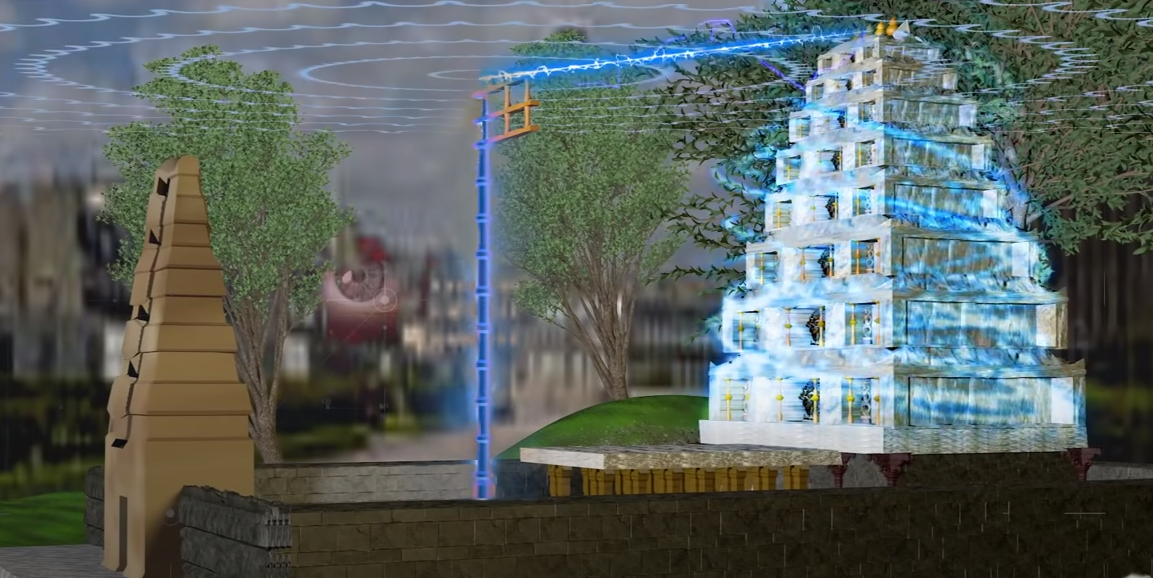 Src
There's a dhwaja of brass and rarely of gold too they are told to be good conductor of sound and electricity so these are installed in such a way that the heathy sound waves travels around it and reaches as far as possible.

Chanting sound Engineering
I came across a research on internet where two chants called Lalitha Sahasranamam and vishnu sahasranamam were played on volunteers and the Para synthetic nervous system effects were calculated. the monitor showed the differences in the waves and it were legitimate. Mind you these were 1000 years old sound engineering.
Strings conducted the experiment. There are many such sounds around the globe created by ancient people which are marvellous peace of engineering and are still appreciated and used world wide.

Acoustic Effects
Theatre design consists of multiple things to account for. Now with the most decent technology we are able to create best musical experience in theatres and open air theatres with all that cotton padded walls, best angled elevated seating, best music and sound system and what not and that's a positive part but there's an auditorium called Theatre of Epidauraus which is a masterpiece in Greece depicting how architecture has a solution to sound related problems. 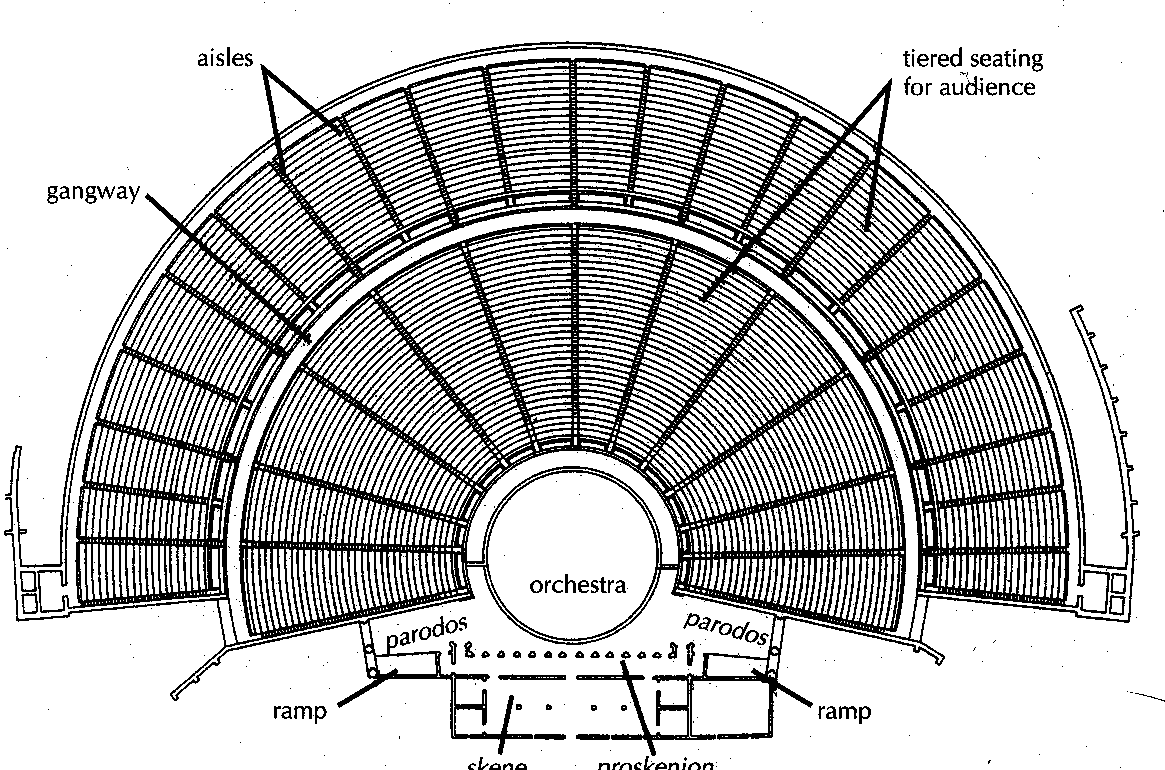 With capacity of around 15000 spectators this huge theatre wraps it's seating steps in semi circular way around the circular stage. This structure is till date provides the best acoustic experiences due to the design of the steps. First of all let's not forget the fact that there's no close ways its open air and still reverberates best experiences by cancelling low pitch nuances sounds and echoing high pitch sounds from stage.
How it's done is that diffusion is the phenomena that takes place when sound wave encounter a surface what the steps does in this case is that it elevates that wave in such a angle that it echoes more prominently and everyone could hear the sound properly. That's all the geometrical arrangement and proper planning because of which amplification takes place.

Concluding with a thought that there are varied design elements which brings out the importance of sound to human experience. Learning about how humans were aware of sound's spiritual and entertaining importance in past and their solutions for it to reach at maximum capacity to humans through built structures is marvellous.

Images which doesn't belongs to me are sourced duly.

This designs are still in use to date in our auditoriums and stadiums. It shows how well our ancestors able to understanding sound, architecture and engineering. !discovery 15

Indeed the history of mankind depicts how advanced they were in construction.
Thanks @juecoree foe your kind words:)

Hi Sahiba, this is such a brilliant post! Interesting to learn the reason behind the no ventilation purpose in the temple. Visiting ancient amphitheaters that are empty, my friends and I always try to play around and test the sound because the way they are designed is so efficient. Your post reminded me of the Prague opera house I blogged about several weeks back where a needle drop could be heard within the closed theatre. They applied the same principles of acoustic design but have been modified to create boxes.

Wow, how interesting would be to visit Prague opera house, It is so fascinating to play around and see if it truly works. There are some marvellous structures around the globe.
Thank you for appreciating and hope you are relaxing during this weekend:)

Great article, I learned about sound and acoustic when I designed a hall room for the first time. Later, I learned about amphitheater as well. Today I came to know many small details by reading your post :)

Hey @priyanarc
Learning about such things is always interesting and fascinating. Thankyou for your kind words,, hope you are staying safe and having a productive week:)

Acoustics definitely plays a significant role in architecture and design. The human experience of beautiful sounds, like the various notes of soothing music that we listen to, helps us enjoy these activities. Noise is still a type of sound but is destructive to our overall health. With the right tunes, we can even end up dancing our cares away. Have a wonderful weekend @sahiba-rana! 😀

Hi @storiesoferne That is absolutely true Sound has so much more effect on your body and structures has ability to resonate it to us.
Thank you for your kind words and wishes I hope you too have an amazing weekend.😀😀

Warm greetings @sahiba-rana! We're truly grateful to you for sharing your beautiful post about acoustics and the principles of sound in architecture. Thus, we're happy to choose your awesome content to land on the Top Feature of Architecture Brew #23! Congrats, all the best, and keep publishing remarkable works! The Architecture+Design Community is an Active Member of the OCD Communities Incubation Program. Get to know more about us by reviewing our Comprehensive Guidelines.

Friend @sahiba-rana you have made an interesting publication about acoustics and architecture. I congratulate you on your research to argue your content. Blessings.