gentleshaid in Architecture+Design • 2 months ago The mound of termites is a structure that can be as high as 17 feet or even more depending on the species of termite. It is built using only soil and water, often supported by the saliva of tiny insects. Despite the simplicity of the materials used in their construction, termite mounds are usually very strong and have been analyzed to have a safety factor that ranges between 50 and 100 depending on the shape. To better understand how strong the termite's mounds are, anthropological buildings have safety factors that range between 1 and 3.

According to research, it takes an average of 3 to 4 years for a mound to be fully built. One major hindrance to the building of mounds by termites is rain as water has the capacity to destroy what is freshly built. After drying completely, rain no longer poses a problem. By Dr Mary Gillham via flicker

Getting the queen means that we have to dig through the mounds of termites and engage in fierce battles with the soldiers of the colony. Looking back now, I find the adventure totally not worth it because the effort we will have to invest in order to get the queen is significantly more than the satisfaction derived from eating it. It was during these periods of hunting for termite queens I got to know that there are different chambers serving different functions within the mound (even though I did not understand it back then). The inner chambers include:

The fungal garden is perhaps the most interesting chamber in the architecture of the termite's mound. Fungi are cultivated and eaten in order to maintain the intestinal microbiota which enables them to digest cellulose in woods and plant materials. The architectural structure of the mounds ensures that the ambient temperature is at the optimum level for the cultivation of the fungi. As sturdy as mounts of termites appear, it is interesting to know that they are usually porous/permeable to air. Termites need to exchange gas in order to stay alive and living some feet below the ground with an impermeable superstructure is a recipe for self-destruction. Thus, the interiors of the termite mounds are designed in such a way that gaseous exchange is made easy and has been likened to the lungs in humans.

There are several amazing human architectures, no doubt. However, the natural architecture in the form of termite mounds continues to be one of the most amazing edifices that are not built by man. Termite mounds are usually in a constant state of repair and modifications according to the needs of the colony. Thus, it is rare to find defected mounds unless accidents happen to them either naturally or anthropogenically. Even at then, the repair is usually swift as the workers are always ready to work.

Some of Antonio Gaudi's works were probably based on these! 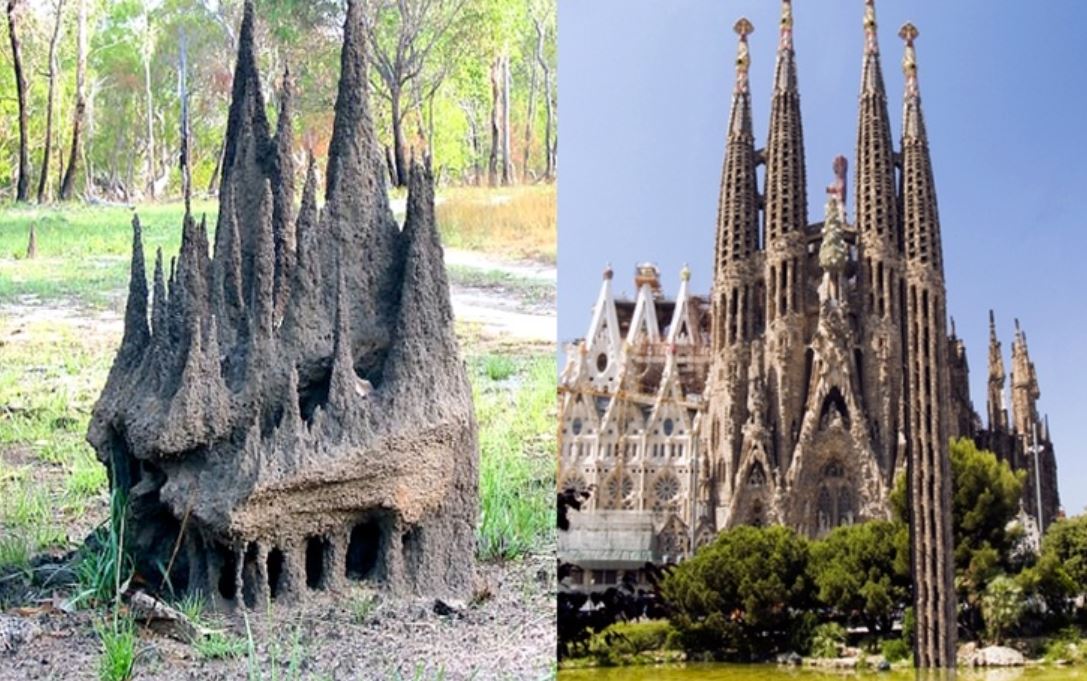 The size of the mounds on the pictures is definitely impressive. I remember having seen huge ant mounds, but never termite ones.

I guess this post misses a picture of that you saw yesterday (or maybe two days ago now). Do you have something to share?

Cheers, and have a nice week-end!

I guess this post misses a picture of that you saw yesterday (or maybe two days ago now). Do you have something to share?

I wasn't with my camera when I saw it. Will definitely go back to take a few shots in the coming days.

Those hills have termites in it and I hate it but lovely post.

No one loves termites, especially their bites and destructive abilities. Thanks for the audience.

Wait, is it that the Queen is tastier? 😄

I enjoyed reading this. It's just like watching an animation about termites and getting a view of the insides of the mound.

Looking back, not like the queen is actually tastier, just the extra body that is largely made of fatty stuff. I guess it was just youthful exuberance then

The architecture of the insect building that is so large and amazing and made by insect animals is really quite sturdy and I have never seen a termite house that big, thank you for sharing friends.

You are welcome! They can be amazing

Amazing, thanks for the insights, well worth the read.

The first one looks like a primitive house built by early humans. These mounds made me remember the time when my father was getting some soil in the mound and using it to make a clay stove.

Indeed. Insects too can be quite intelligent. Such an amazing set of creatures

Indeed, termites are great engineers, look how they are able to build their houses, and nobody in the world can do what they are doing.

It is remarkable what nature can do.

Nature has it all. Thanks for coming around

Thank you for subscribing to Architecture+Design, an OCD incubated community on the Hive Blockchain.

Hello @gentleshaid. We are grateful to you as well for your fantastic contributions to this community. Cheers! 😀

They are huge… beautiful to see the mounts. Thanks for sharing.