⚖️ Yhprum Law - What is Yhprum Law? Have You Heard of This Law Before?

Greetings.
According to Murphy's Law, "Anything that can go wrong will go wrong." understanding was present.
So "If an outcome has more than one possibility to get the job done, and if one of these possibilities will have consequences or disasters, that probability will certainly come true." We can say that it has basic principles such as.

Actually, Yhprum's law is the opposite of Murphy's Laws in both content and spelling :)
Just as the opposite is described in the photo below. 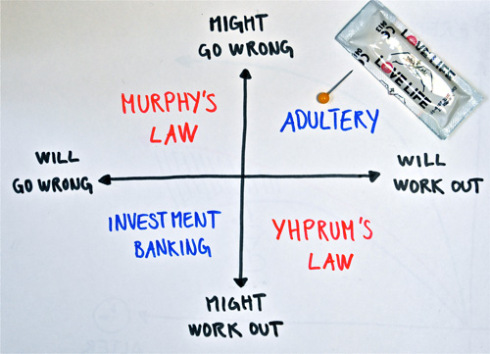 To summarize the Yhprum law, "Everything that can work, works." We can talk about a definition in the phrase. We can also say that the basic principle is based on this. The result is the opposite, inspired by Murphy's laws.

Based on this, Resnick et al. inspired by him and decided to use this law. So what did he say about this?
Resnick et al. (2004), using this law, explained how selflessly and properly participating in the ranking system on eBay and used this law.

Like Zeckhauser, he defended this law and made a definition according to himself. According to Resnick's definition:

"Something that shouldn't work sometimes works."

We can say that as explained.

1. If there is a possibility that something will happen, it certainly will.

2. Everything that can work works.

In summary, the Yhprum Laws are the opposite of Murphy's Laws. Compared to this, Yhrpum's laws will be more attractive to us. So when I meet the two, I can say that I am more satisfied with the Laws of Yhprum.
At least not funny like Murphy's Laws :)))

Now I just remember the phrase "Whatever will be, will be"

Initially, I used to operate on this belief but not anymore, I decided if I wanted something to work, I need to make it work, instead of leaving it all to fate.

This doesn't mean there are no things that I leave to chance. They are there staring at me in the face.

And for one reason or the other, I let them be, allowing destiny to take its course

I guess I may be living both on the premises of Yhprum and Murphy's Laws. Who knows?

Maybe everything is in everything hmm. Who knows?
While things are going through, you can experience the opposite of things.
Listen to some blues : =)