WHAT IS MURPHY’S LAW? - Murphy's Laws do you have any information about what happened? Let's find out.

Greetings.
Today I want to talk about an interesting subject. `` Murphy's Laws ''.
What are Murphy's Laws? By whom? Why was this law put forward?
What do the laws contain?

First of all, let me state something with a few examples.
For example, when we wash our car, the next day, a terrible muddy rain falls and our car gets dirty. Just as we are going to take a shower, your phones will ring at that moment. Or if you are going to do any job, then something comes out and you concentrate on another job. YES WELCOME TO MURPHY LAWS WORLD.

"If something can go wrong, it goes" 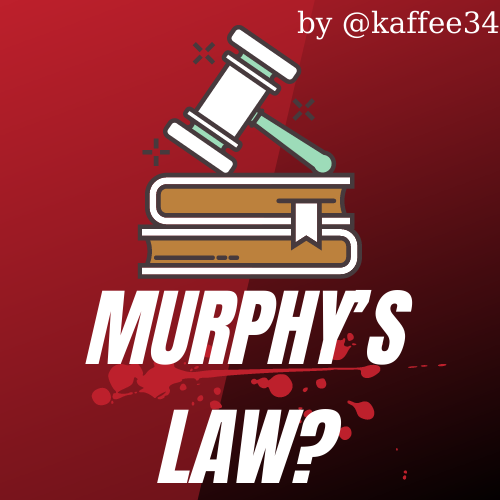 canva The logo I prepared by Canva.

Born in 1917, Edward A. Murphy Jr. He was one of the engineers in the US Air Force who experimented with rockets in 1949. He was studying the effects of acceleration on human beings. One of the experiments had to attach an accelerometer to 16 different points on the pilot, and the sensor could only be attached in two ways with an adhesive. Someone managed to insert all 16 sensors the wrong way round.

Later, Murphy wanted to announce them to the world through a press release, synthesizing them and bringing them to the form of law.

1)Murphy's golden rule: whoever has money puts the law!
2)Murphy's Philosophy: Smile :) ' Tomorrow it will get worse. '
3)Murphy's constant: The world's population is constantly increasing;; but total intelligence remains constant.

Although Murphy's Laws may seem humorous, they actually have a very serious meaning and seriousness in their basis. Technically, we can say that there is a strategy to prevent errors in the analytical perspective.

Words on the basis of Murphy's Laws:

"If an outcome has more than one possibility to get the job done, and one of those possibilities is going to have consequences or catastrophes; that possibility will certainly come true."

"Anything that can go wrong will go wrong."

👉 If a job is likely to go wrong, it will definitely go wrong.

👉 Even if you block the possibilities that something could go wrong, a new possibility will instantly emerge.

👉 Wait no matter how long you wait, the unwanted time will come.

👉 Nothing is as easy as it seems.

👉 If you are looking for something, it is always the last place to look. :)

👉 The most sensitive thing is the one that will fall and break.

👉 Luck knocks on the door at the most unlucky time. :=)

👉 If there is something to fall in the bathroom, it will definitely fall into the toilet. :D

👉 Of course, there is one more important thing. There is no connection between being aware of Murphy's laws and your business going wrong. ;)

Yes in general, such examples can be varied and multiplied. Of course, you are not alone as living them, friends :)