Why has the price of petroleum fallen and to what extent can it continue to fall? Greetings friends of hive, on this occasion I would like to carry out a series of analyses based on certain considerations and economic aspects related to the fall in petroleum prices at present.

I believe that it is convenient before entering in matter, to be able to explain to them the central point by which any product lowers its prices in any market, for this case we must include the price of a product that moves the economy in the world and it is not more than petroleum.

There are two fundamental elements in the price experienced by a product, which are:

Once we understand these two concepts of supply and demand, we must situate ourselves in the current context, that is to say, at present oil prices have been experiencing a downward trend, so it is convenient to carry out the analysis from an economic approach, if the oil price market is experiencing a drop in its prices it is probably due to the fact that a large volume of oil is being offered that exceeds the volume of oil that is being offered. 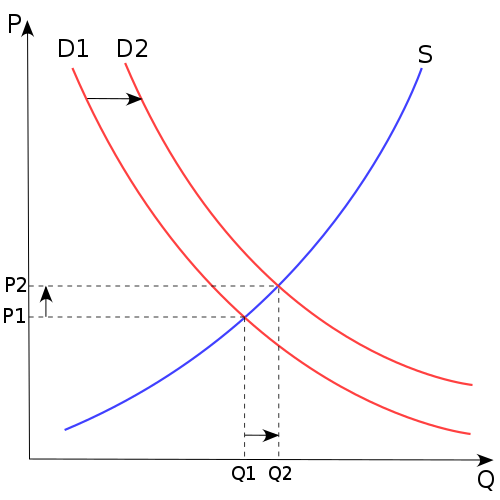 This supply and demand graph can be constructed by plotting the points on a system of Cartesian axes, where the Y axis in this case would be the prices of the product (P) and the X axis would be the quantity of the existing product (Q).

In the current case, as I explained above, the demand from oil consumers and buyers worldwide is below the volume of oil being offered, causing prices to fall considerably.

But in this context it is worth reflecting and asking the question:

First of all we must know that there is no single reason why demand in the volume of oil has fallen worldwide, there are multiple reasons why demand has fallen, however there is one that predominates over the others.

One of the reasons why prices have fallen is because of the lack of unity between oil production prices, since if the supply of the volume of oil from the different markets at a global level exceeds the demand of the consumer markets, certain measures must be taken to restrict production.

Among these measures is that production quotas can be lowered, however within OPEC there is Saudi Arabia which is the main producer and exporter of oil in the world, this country launched a price war during the weekend and apparently has influenced so that oil prices have fallen.

The idea is that all the countries will certainly manage to commit to lowering the production quota and in this way prices can be stabilized, however, as all the countries are not unified under the same market, there are OPEP countries that want to increase production in order to face the United States of America in a competitive way.

The oil price market is to some extent abstract, and it is therefore highly appropriate to analyse the commitments to cut production, because although it may be a measure that favours price increases, it is also true that minimising production allows the market of competitive oil industries to enter the market and position themselves considerably.

Another reason for the drops in oil prices is the low demand for hydrocarbons worldwide, so the following question must be asked:

What is happening now that the current demand for oil has decreased abruptly?

The covid-19 pandemic has decreased global demand for hydrocarbons. However, despite the low demand for oil worldwide, the reason why oil prices have dropped to the current level is because China is one of the partner countries in the purchase of high volumes of oil.

The fact that China has been significantly affected by this pandemic makes the demand for oil drop considerably.

Added to this as the covid-19 pandemic spread to the rest of the world, all the countries of the world in their vast majority have had to apply total quarantine measures, making this produce a considerable isolation on the part of the world population which has led to a decrease in the demand for world oil consumption and therefore a drop in oil prices.

Te countries most affected by low oil prices will undoubtedly be the oil-producing and exporting countries, and within these I consider particularly those that depend exclusively on oil prices as the main source of economic income to be hit the hardest economically.

That is why those countries that are oil rentiers must adjust over time under certain economic measures, where they can activate other rentier elements within their economies, as low oil prices may considerably affect their gross domestic product.

Not all the panorama his negative for this oil producing and consuming market, for the case of the countries that are highly oil consuming this context in the low oil prices could favor them to pay for oil at a very low price, and little by little as the quarantine restrictions are lowered, these consuming countries can be activating their oil processing and refining industries based on the acquisition of volumes of oil at very low prices.

Let us wait for the rest of 2020 to see the different favourable and unfavourable scenarios following this collapse in oil prices, where we may see that oil prices may reach historical lows of up to 4 and 7 dollars per barrel, all depending on the quotas adjusted by such important markets as the oil-exporting countries (OPEP).

[1] Why oil prices collapsed and what it means

Although the coronavirus has really affected the economy and oil demand currently as most countries do not demand for oil, at the same time countries like China is gradually going into renewable energy and using electric vehicles which means lesser need for oil products. The earlier oil producing countries start to know that they need to move gradually, the better. More so, a lot of countries are already finding oil which means lesser demand and a higher supply.

Thank you my friend for the analysis that you share in this commentary based on my publication. Really, as you say, oil countries must renew their sources of income in other types of economies other than those dependent on oil income.

The other important thing is that when all countries realize the importance of reducing greenhouse gas emissions we will seek to generate renewable forms of energy, so oil-rich countries will see their economies decline. Greetings

Definitively, changes in this way are not encouraging, we must hope that it can happen in the not so immediate future, and our country, as you well know, is directly affected.