"Cryptocurrency" should now rank among Maslow's hierarchy of needs not necessarily 9th: The Africa Perspective

uyobong in LeoFinance • 3 months ago

As development and innovation continue to emerge in the blockchain and cryptosphere, the word "Crytpocurrency" would soon become a compound word that mean something much more than cryptic money. With Decentralized finance (DeFi), Gaming Finance (GameFi), Non-fungible tokens (NFT), Play-to-Earn and other words and phrases finding their way into the crypto related vocabulary and growing in their respective scope, it would be possible that soonest, cryptocurrency would rank among the top needs of human.

Abraham Harold Maslow in 1943, being influenced greatly by his scientist mentors, Max Wertheimer and Ruth Benedict, suggested his own system of hierarchy of human needs in his article titled "The Theory of Human Motivation" and later published in the book “Motivation and Personality” in 1954. With his convincing facts and follow up research findings, Maslow's hierarchy of needs became a tool to reckon with when talking about human needs.

Maslow's hierarchy of needs, which is split between deficiency needs and growth needs, is used to study how humans intrinsically partake in behavioral motivation. He used terms such as physiological, safety, belonging and love, social needs or esteem, and self-actualization to describe the pattern through which human motivations generally move. In his ascertions, it was pertinent that each stage of needs had to be satisfied within the individual themselves before the motivation to arise at the next stage.

While the position of this post is not from a psychological standpoint of facts, I can vividly say that the time and development which are known determinant for shifts in paradigms have happened over the years and it won't be out of place to reschedule our priorities as it has to do with needs in the light of today's realities. While several researchers have done justice to reacting to Maslow's need hierarchy, my standpoint would be different. First, looking at top 10 Bloomberg's Global Billionaires index and list, as in the screenshot above shows how "technology" serves 8 out of the top 10 world Billionaires in their financial standings, not food, not clothing, not shelter. While there are many factors to consider before drawing an inference, one must worry about how these top billionaires make their wealth if not from people's wealth. It is very rational to reason that they had taken advantage of the greatest need areas to provide the needed commodities which in turn earned them money and wealth accumulated to their present financial statuses.

We can agree to some level that technology has crept into all sectors of our lives today and anyone not willing to buy in would certainly lose out. While it comes with its pros and cons, it is true that technology has help humanity to save time, effort and drudgery in daily activities. While technology needs seems to be prominent in America where Nine of the top 10 rich guys originate, Forbes list of Africa's top rich list shows a deferring view. 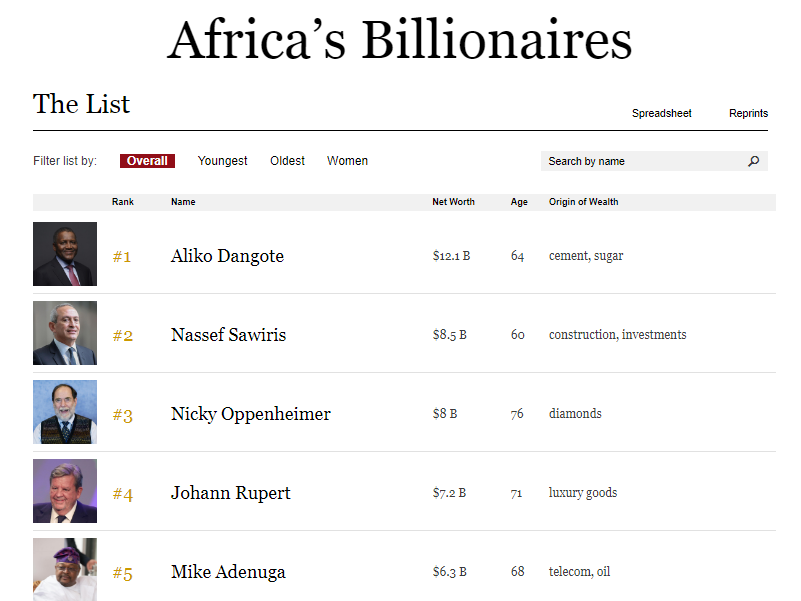 Food and Technology related products tally as the key products associated with the top 10 Africa's Billionaires each with 3 counts. Other sectors share the remaining 4 slots. From my understanding, it seems that the whole top spots were dominated by food and related consumables in line with Maslow's hierarchy of needs, but we see how technology related fields are propping up towards overtaking other sectors. Part of Africa is undeveloped while others are developing and that could excuse the low count of techniology related products in the high demand.

My top image shows that the growth of blockchain technology and cryptocurrency has really gained top acceptance in Africa. Chainalysis reports shows that Africa “has some of the highest grassroots adoption in the world, with Kenya, Nigeria, South Africa and Tanzania all ranking in the top 20 of our Global Crypto Adoption Index.” That's terrific. It looks there that the eyes of people are getting opened and they are reaching out to have a grip of cryptocurrency perhaps as a tool for wealth preservation.

The report shows crypto related trends in Africa covering: growth in grassroots adoption, increasing popularity of peer-to-peer (P2P) Platforms, crypto-based remittances and crypto as a tool for wealth preservation source. The chart shows that though Africa has the smallest cryptocurrency economy of any region under study, however, a huge $105.6 billion worth of cryptocurrency have been received between July 2020 and June 2021. Moreover, the report has it that Africa’s cryptocurrency market grown over 1200% by value received in the last year, and the region is the third-fastest growing cryptocurrency economy. Africa reportedly has a bigger share of its overall transaction volume made up of retail-sized transfers higher than any other region over 7%, when compared to the global average of 5.5%. source

With that trend as revealed above, it follows that the demand for cryptocurrency is on the fireful increase in Africa despite many governments attempting to hinder smooth transaction of cryptocurrencies with banks. Going by the re-ordering demands, it would follow that soon, cryptocurrency should find a place within the top hierarchy of human needs making up the 9th but not necessarily at the 9th position. Agreed that one cannot really comprehend his crypto holdings when he is physiologically impoverished. Safety may still find a place as second priority, at least, we also prioritize safety in cryptocurrency. From belonging and love needs, esteem, cognitive and others, I see the cryptocurrency need suitably placed. Today, the poor man unable to provide for his family may never have the esteem to carry up his head in the league of friends. Moreover, one may be able to express love to himself by being sure he has 1 Bitcoin. let's stop there.

I hope our Tech-economist @Taskmaster4450le finds this blog worthy of a critique and contribution.