Signs of crypto adoption - The case of Uruguay

tokenizedsociety in LeoFinance • 9 months ago 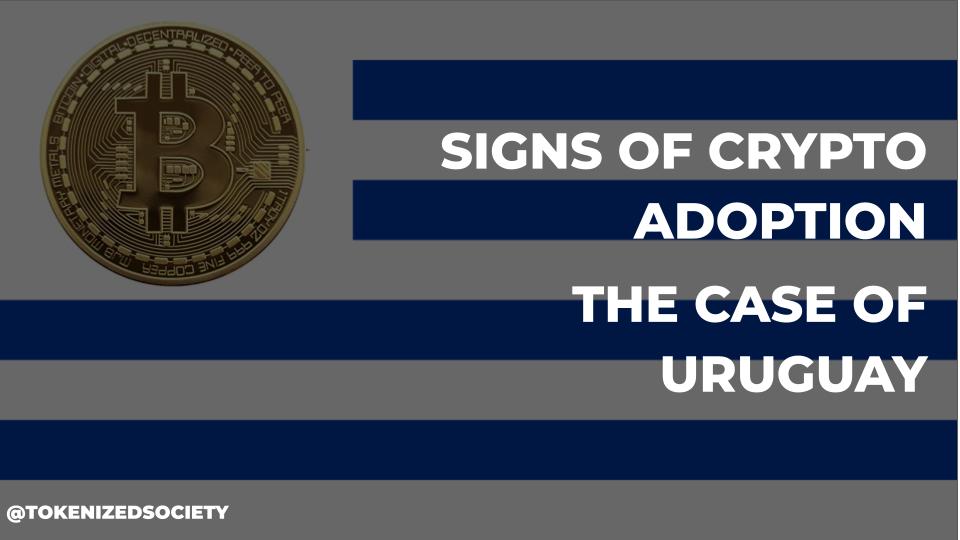 I believe some signs show a country is a suitable candidate for mass crypto adoption. In this article, I will go over some of the signs that explain why Uruguay can be one of those countries.

In a recent article, I talked about the "Bitcoin Law" that's being prepared by the government of Uruguay and how that is a sign that more countries are contemplating and even preparing to incorporate cryptocurrency and blockchain technologies into their systems.

That was not too much of a surprise for me, as I've said before. I've said many times that I believe Uruguay can be the country that will spark the adoption of cryptocurrency and blockchain technology in South America.

Of course, as always, there is a good bit of speculation on my part - this is crypto, after all - but a few signs lead me to believe that Uruguay is an excellent candidate to be at the forefront of crypto adoption in the continent. I want to go over them briefly in this article.

This is probably not the most important thing, to be honest, because when it comes down to money, I've seen some very conservative people give up their more sacred principles in times of need but still, I believe that because crypto is so disruptive, so new and, thanks to mainstream media, surrounded by tales of terrorism, money laundering and all sorts of criminal activities, having a progressive mindset can help the case for adoption.

Uruguay is probably one of the most progressive countries in South America and perhaps in all of Latin America. It was the first country in the world to legalize Marijuana back in 2013.

It may be a stretch to believe that the same principle used on a widely researched substance will also be applied to something that most people in the world still struggle to understand but, again, I think it doesn't hurt to have that mindset in the first place.

Blockchain and crypto are very complex subjects, and that's why education is the key to mass adoption. Despite being a small nation in South America, Uruguay ranks quite well in education being 1st place in the continent and 33rd in the world ranking.
Proper education is crucial to addressing three significant obstacles to crypto adoption: financial literacy, trust and safety.

It is estimated that 15% of the world's Bitcoin supply circulates in Latin America, but, ironically, a recent report showed that 99% of Brazilian and Mexican respondents failed a basic assessment on crypto literacy. Maybe Uruguay has what it takes to change those statistics and help spread crypto over the continent.

Last but not least, one of the most controversial topics in crypto at the moment. The old argument that cryptocurrencies require a ton of energy and have a colossal carbon footprint is one of the favourites of the mainstream media.

It doesn't take much to find out that this argument is flawed in many ways, but the cold truth is that it sells, and it's one of the first things that someone that is anti-crypto will throw into a conversation around that subject.

Uruguay is well-positioned in that arena as roughly 98% of electricity is generated from renewable sources. The country's geographical location is ideal for solar, wind and hydropower generation, so it's not a surprise that it is one of the leading nations in wind energy production.

One possible barrier here is every cost. The average price per kW is around 0.2 USD which is high compared to neighbouring countries, but the country has been investing heavily in more efficient ways to generate energy, so maybe we will see that price decrease.

Progressive thinking, education and access to clean energy are, in my opinion, some important signs that a nation is a good candidate for crypto adoption. I used the Uruguay example here because it's a country I recently talked about, but I believe a similar analysis could be done for other countries.

While these are not the only factors, I think they are important ones because crypto adoption is a social phenomenon as much as a technological and economical one, which is something that some people tend to forget.

At one time, energy consumption was a big deal when it came to cryptocurrency. When Bitcoin mining moved from personal computers to dedicated rigs, the rigs just went bigger. Then the rigs became so large that "mines" the size of complete data centers became the norm.

Eventually, energy consumption became a concern for the data enter-sized mines themselves. So it became a mission to find more effective ways of mining Bitcoin. Elon Musk may have has a smaller-than-expected role in this with his tweets, and it's possible this move was already in progress before he made his tweets in 202o or 2021. Likewise with President Nayib Bukele of El Salvador.

It's like cars powered by gasoline. Today's cars running on gasoline still produce exhaust with pollutants (which does not include CO2), but the amount produced today is only 1% of what was produced by a car during the 1970s. It will be similar for crypto mining.

Yes, I believe that we will become more efficient on the mining side and also on the energy generation side as well.

It seems like a very interesting development! I hope Uruguay can be the catalyst for other countries of the region to start looking in that direction and adopting crypto in some ways at least!

Is it? I didn't know about that

Interesting and could be related indeed

Yes, that's what I hope for too! Living in Brazil, I think it would be great to have a neighbour country adopting crypto. It could be great for adoption in the rest of the continent

It's a bit of a surprise to see 98% of their electricity come from green energy and of course that comes with higher costs. Green energy just isn't cheap enough but I do think it will be eventually and it's nice to know that all the green energy will help them gain crypto without too many extra costs.

Perhaps Uruguay is taking advantage of hydroelectric and geothermal power sources. Those are more reliable than wind (which is mercurial at best) and solar (which requires enormous real estate). If Uruguay is close to the Amazon River, then hydroelectric is a natural choice for energy there.

I'm not sure about geothermal but you're right about hydroelectric. More than half of their energy production comes from that source.

Wind-based generation is pretty reliable there due to geographic aspects. They are one of the top producers of wind energy

Yeah, they are betting on the future I guess. They are one of the world leaders in renewable energy production

I think, South Africa, (where I stay) would also be in a good position, unfortunately we don't have a progressive thinking government. Although we have space and a sunny climate, we are still one of the biggest coal burning nations for electricity generation!!

Interesting! I'll take a closer look at that!
I hope you're right because I think it's important that we have crypto hubs in all parts of the world

I feel the same. I wish my country would take part in that movement. I have hopes it does eventually

Many countries will have to adopt cryptocurrencies in the future. At the moment, some are afraid or the central authorities are preventing it, but in the future they will accept it whether they want it or not. It's pretty hard to avoid that.

I agree. It's something that cannot be stopped. Governments may fight it but eventually they will give in

Even if they fight, they won't be successful, but those who give up early will be the most profitable.

I really want crypto to be adopt in Nigeria because it will solve poverty problem.

I hope so! Crypto has the potential to transform the reality of a country, that's for sure.

Yes, there is huge opportunity in crypto. But the government in Nigeria want to put the citizens in poverty as they may remain in government.

Nigeria leader's are selfish and corrupt they are into crypto and they are making alot of money 💰 but will not want the poor or masses to benefit, that is the kind of country we are my dear

Am not sure they are into crypto. The government ban crypto because they want the citizens to be rich.

In their secrets closet am sure they will, they have alot of hiding agendas the citizen do not no especially the politicians in high positions @zeezee25

Let work with fact and not speculation. The fact remain that the current Nigeria government is against crypto.

Those countries that enjoy full supply of electricity do not know what values they have unlike when you have to stress yourself about electricity in my country Nigeria.. You pay ahuge amount for electrical supply bit won't still enjoy using it.

Sorry to hear that. I've heard before that the energy situation in Nigeria is far from ideal. I hope it can be improved one day

Yeah it is fare from ideal and you get to pay for what you don't use.

Congratulations @tokenizedsociety! You have completed the following achievement on the Hive blockchain and have been rewarded with new badge(s):

Thanks for sharing this article about the important role of Uruguay in cryptocurrency adoption in Latin America.

Yep, the interesting thing is that the actual president LAcalle Pou is very in favour of crypto, BUT against blockchain!!!
I heard him on an interview.. let me find him again.