Due to Covid-19 and the release of the RTX 3000 series GPUS, there has been massive shortages on GPUs, new and used.

The RTX 3000 series GPUs were released on September 17th, 2020 and most gamers still cannot get a hold of one. This is a result of massive shortages due to Covid-19 and the massive bull run. To "help alleviate" the shortages Nvidia is releasing gimped GPUs that can only mine crypto and cannot be used as a gaming GPU. The reasoning behind this is to prevent crypto miners from buying up all the gaming cards. 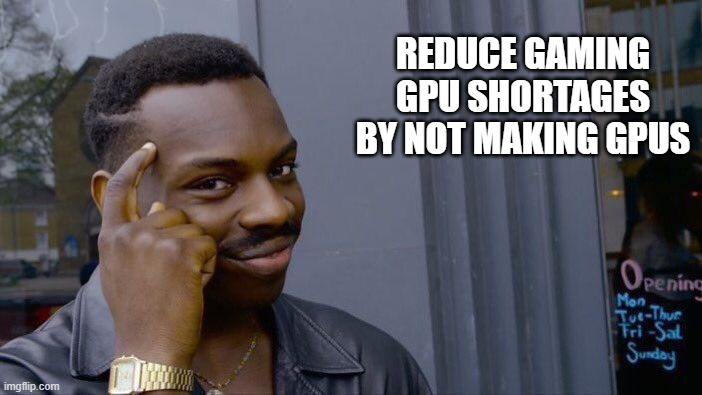 Nvidia claims this move will allow more gamers to get gaming GPUs. So somehow during this pandemic when they cannot make enough gaming GPUs they are going to add a new product line that has equal or more demand and some how supply more gaming GPUs to the public. Umm, yeah.

Nvidia is calling this new product line the CMP series, or "Dedicated GPU for Professional Mining".

It is clear the 90HX is the Nvidia 3080 card based on the hashrate. Regular NVidia GPUs will include a bios / driver handshake that detects crypto mining and reduces the hashrate by 50%. This will make these cards less desirable for crypto miners as it will drastically reduce the profitability of these cards.

Nvidia has already proven they can not even remotely keep up with the demand for the RTX 3000 series cards.

So where do these mining GPUs go when you are done with them?
If you guessed the landfill, you win!

"E-waste is the most rapidly growing waste problem in the world. We generate about 50 million tons of it every year. This is equivalent to throwing out 1000 laptops every single second. In some places the amount of e-waste increases with 500 % in the years to come."
theworldcounts.com

That's a lot of e-waste, and soon to be a lot more with Nvidia's one-time use CMP series GPUs get released.

What this really comes down to is Nvidia seeing a new market where they can make even more money than they do now. GPU prices are already at insane levels making PC gaming a luxury. The most attractive RTX 3000 series card, the RTX 3080, was announced at $699 but are selling direct from retailers for as much as $1,100 almost twice the MSRP. Part of the increased prices are the result of the Trump administration instituting a 25% tariff on GPUs and motherboards from China. Another reason for the price hike is the result of VRAM prices skyrocketing due to shortage of GDDR5, GDDR6, and GDDR6X chips.

These price hikes will likely reach the next series MSRP and result in an even higher list price for RTX 4000 series cards coming even closer to $1,000 (or even past) for their flagship cards.

I knew this was a horrible idea, but I hadn't even considered it fully yet.

Wasn't there a mining card out a number of years ago too though?

This idea to hobble their card for mining purposes to ensure supply for gamers is absolutely insane. I am also almost certain it won't last. Someone will find a workaround. Or they will realize how stupid of an idea it was. I'm betting someone breaks it first.

This makes an absolutely huge hole in the market as well though. I hope AMD look at their offerings in the future and put out a MASSIVE supply of whatever card they can put out in huge numbers that can become the new kingpin of the mining market. Either through hashrate, or even just through efficiency. If they can manage to get out something that just barely is in line with Nvidia even, but has greater resale potential, they win. Because miners don't just care about what the fasted card is, but their bottom line. If AMD can make a more economical card, they'll switch to AMD.

Wasn't there a mining card out a number of years ago too though?

There was, then ETH crashed and it faded into history.

I wonder if this will affect those of us who use GPUs for BOINC and "mine" Gridcoin? Gridcoin already isn't profitable but if you are already running various BOINC projects anyway...

We have been trying to get for the last week as have one mine set up and going to have 5 more hopefully. Not a huge return, but looking like $15-$20 per day right now so 5 more will be worthwhile depending on which card we can get.

I was trying to bide my time to upgrade my GTX 1080. I was hoping that eventually things would die down a bit and I could get something new, but this is not very encouraging. It doesn't really surprise me at all. As the meme says, they have always been pretty greedy. It makes me a little sad I dumped all of my NVIDIA stock a long time ago when it was doing so horrible. It was probably more of a long term hold.

It has been frustrating as hell to upgrade my 4-year old card to a current one so I can play games with friends. I would definitely double duty that with mining while I am not gaming to make more use of the investment.

Doesn't matter when there are none on the market, and the scalpers are making bank by taking advantage of the demand.

When I heard the newer cards were going to come at a lower retail price tag, my first impression was positive til I immediately remembered that this was an empty sentiment if there are zero available. Gimping mining and gaming cards for doing the other is such a stupid bandaid when compared to just upping production/employment/availability to meet the true demand.

Price hikes will be inconsequential once again as you won't be able to get your $1000 card for less than $3000.

Seriously good for them for being in the right business. Shame on them for not doing business properly. Boohoo for the little guy.

Nvidia is applying it very well and is seeing big gains.

Mining the mining cards for valuable resources will soon become bigger. E-waste is a shame waste

E-waste is liking to the next plastic in the pollution world . The dangers of E-waste is far more than other pollutants to be honest and here in India due to poor disposal procedure , many are getting skin diseases and other allergies .

Hey You can't blame them they hold a majority share for GPUs that people want. Miners will most likely play a premium over gamers most likely and in larger quantity. Good stock to pick up? Very possible!

I didn't know about this at all. What's the best alternative to Nvidia in your opinion?

It's Nvidia or AMD, that's it.