LeoFinance Full–Scale Rebuild: A Dedicated Page for the LEOGLOSSARY – A UI Design Proposal.

thecuriousfool in LeoFinance • 3 months ago 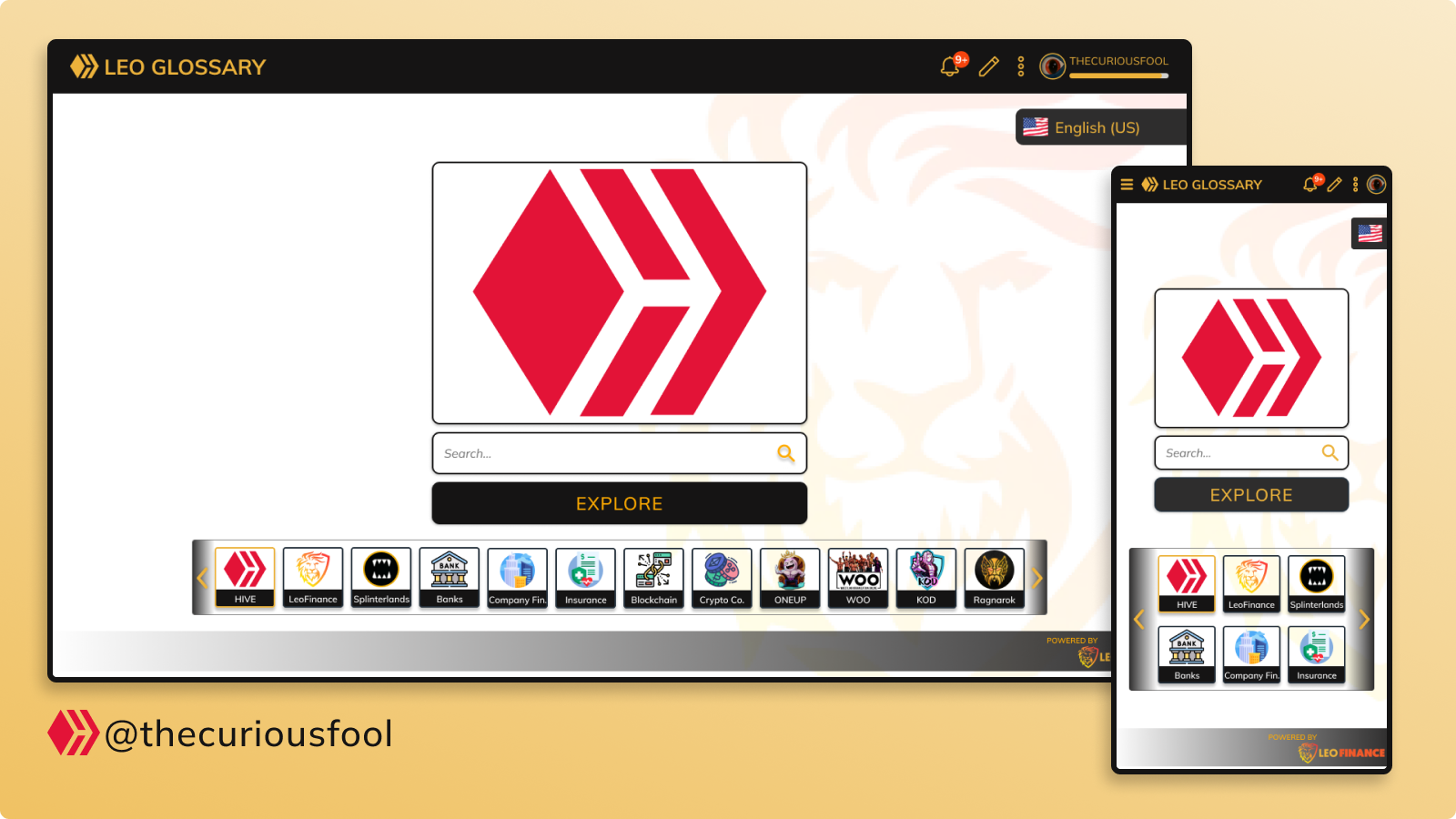 If you read my previous home page design proposal, you might have noticed that somewhere on the drawer menu, I purposely included LEOGLOSSARY in it. The purpose is that I am thinking of making a page dedicated to the Leoglossary. Which is what I would be presenting on this post. 🙂 As of now, the easiest way to view the contents or find a specific term on the leoglossary is to go to the main menu post and find the term that you are looking for.

To be honest, I was not aware of this post until I read the article published by @lbi-token. I always wanted to incorporate the leoglossary in some of my previous posts before but I find it very difficult.

From that, I realized leoglossary needs visibility. Leoglossary is a great tool but it's currently not being utilized. Some might not even know it existed. This is the main reason why I added a menu on my previous home page design for more users to see and access it easily.

During the early stages of my design, I initially included the leoglossary as a page under the LeoFinance. But as I continue to put my design together, I find that there are a lot of menus flying around the screen. It’s cumbersome and I like my designs neat as they can be. That is why I decided to make it separate like the CUB Finance.

This also made me thinking of how about leoglossary having it's own mobile app in the future?

On the main screen or home page of leoglossary, I made the "explore" button the primary button. I want it to beg the user to click it. A good way to attract the user to explore the glossary if they are not looking for a specific term.

Anyways, here is a more detailed description of what I did with the main page. 🙂

As can be noticed, instead of having LeoFinance as the title, the glossary will have its own LEOGLOSSARY title. It would be an indication that the user is now within the leoglossary home page. This would change to the specific name of the glossary that the user will be selecting.

I am just not sure if it would be appropriate to retain or add the user-specific option on the right part of the title bar. I just left it there to encourage some brainstorming. :)

Considering the number of terms already within the glossary and those that will be added, I believe that a search option would be a great feature to facilitate the user in finding the term they are looking for easily.

If the user is not looking for a specific term, then an explore button would be a great option. This would allow them to explore or check the contents of the glossary.

As the leoglossary is a glossary of glossaries, it would be nice if we present them as selections to the user. A distinguishing logo and text would be a perfect presentation.

I added some items in here not currently under the leoglossary just to illustrate my idea. Who knows, we might really add them in the future.

The left and right arrow buttons suggests the idea of more sections of the glossary. A selected glossary is indicated by the orange border.

One of the things that I’ve noticed is that users are suggesting language support or selection other than English. I’ve seen Spanish being mentioned by @kolus290 and German from @solymi. Of course, I cannot also pass without suggesting the Philippines Filipino as a language option. 😊

I only added a few languages here but we can add more languages in the future as necessary.

There are two ways I can think of how the language can be implemented. It can be a dropdown right where the language button is or as a popup on the center of the screen. In this case, I settled on the popup as a consideration both for the desktop and mobile web UI which can be seen below.

I am thinking of the possibility of implementing the language display/button as a floating view – it will stay in position even if the user scrolls the content.

I added this mark as a way for a new user to also discover LeoFinance. We can either link the logo to the LeoFinance Hive community frontend or direct them to the part of the glossary about LeoFinance.

I also added the LeoFinance logo as a background to the page as I find that it adds style to the page. 😉

The user can then proceed to either search or scan the contents of the glossary on the left side menu.

If ever the user searches or selects a specific term on the left menu, then it will be displayed as the following:

I settled on making the list of terms to be implemented as a drawer menu. I works perfectly when viewed on a mobile phone.

The implementation would be very similar to how our frontends display our posts and articles. Hive would serve as a database by fetching the information from the content posted by the @leoglossary account. The purpose of the leoglossary page is for visibility and as an alternative way to present the information.

Utilization of the HTML Tags

There might be certain information that is great when the content of the leoglossary is viewed as a post but not when presented on the UI that I am proposing. There are many ways to do this and one way is by using custom HTML tags. This way, we can only show what information we like or display them in a special way on the centralized UI.

A great example of this would be this line of text that is linked to the index post:

This is good when it is being viewed as a post but may not be necessary if viewed on the centralized UI. We can enclose this line text with the “<hive-only> … </hive-only>” tags. We can then chose not to display this information on the front end.

We can also do a similar thing with other information that needs to be treated in a special way.

I would be glad to pitch in my thoughts on how this could be accomplished logically by code. 😊

That’s all for me now.
I hope I did a good job making my UI design and in presenting it.

Feel free to drop in your feedbacks and or questions on the comment section below.

Thank you for reading and more power to LeoFinance team and to the whole Hive community.

Let’s continue making Hive a great place for everyone.

Images pertaining to the current leoglossary are screenshots as viewed from the LeoFinance frontend.

Designs are initially made with paper and then finalized on Figma.

An awesome piece of work. This is the power of Hive. I am glad you are picking up the ball and running with it. Motivates me to keep adding to the database knowing others are creating tools to access what is there.

I am glad that you liked my work. Your positive response very rewarding. 🙂
Thanks a lot!

Going to have to really keep filling up @leoglossary. Now the goal is to make it the best source for information of that sort on the web.

Might as well plan huge if you are going to build the apps for it.

I will definitely love it if they (LeoFinance team) would officially task me to make a mobile app for the leoglossary. I would be glad to be working with you and with the team so that we can make a plan and then develop such an app.

I have previous experience in Native Android App development and I would be more than happy to make leoglossary my first dApp. 🙂

To be honest, you dont need the teams permission to build the mobile app for LeoGlossary unless you are referring to the Leofinance mobile app and incorporating it is.

If you seek to build an app for LeoGlossary, you can have at it. You can DM me on Discord if you want.

This is a brilliant design idea for the LeoGlossary. It would be of great ease when using it. I personally have to open 2-3 menus when writing a post to link in some keywords.

Glad you liked it.
The search option can save us time when looking for a specific term within the glossary. 😊

I definitely need that search option :) Hope they will incorporate these on the new UI

Another good work really, I was looking at th incorporation for LeoGlossary and I don't think it's bad. This a direct access on the UI would make sense. These are amazing.

Thank you.
I am looking forward for the incorporation of the glossary next on the create post page too. It would be nice to be able to use the glossary while making our posts without leaving the page. 😊

You did a real good job in that!
!1UP

Thank you. I am glad you appreciate my work.
Let's hope to see this implemented. 😊

Thank you.
I feel very much honored that you like my work. 🙂

Beautiful design man. The Leoglossary is very important, especially for newbies and so it needs to be very visible.

Thank you for appreciating my design.
I am anticipating that it will be more accessible and visible very soon. 😊

If the project ever needs Portuguese translation hit me up. It will be a pleasure to help

This is really creative and brilliant. I hope your hard work gets recognised and appreciated by more people. Because it would really increase the work speed while making it easier by giving users direct access.

Thanks man. I am happy that a lot of people are already appreciating my work (you among them). 😍 That is why I was inspired to make this one.

This is actually the second one I made. There are a lot of positive feedbacks that I am actually making a 3rd design proposal for an already existing page for LeoFinance. I am already happy to showcase one of my existing skills here on Hive. 😊

Thank you for taking your time to view my work.

Keep up your hard work bro. You sure have a bright future ahead. Waiting to see this third project.

Congratulations @thecuriousfool! You have completed the following achievement on the Hive blockchain and have been rewarded with new badge(s):