Yes Robots Are Coming For The Jobs

There is so much news these days. We see so much advancement happening that it is going to make our heads spin. While we are only seeing a trickle in 2021, many believe the floodgates will open by later in this decade.

We know there were jobs that once existed yet no longer are around. Most of us are not old to remember when switchboard operators connected all telephone calls. There was also a time when elevators were manually operated, with some who was responsible for moving people from floor-to floor.

Of course, automation put these jobs out to pasture. Today, we are seeing similar things with receptionists, toll booth collectors, and, eventually, checkout clerks.

The point is that job eradication is not unheard of.

This is something that we heard discussed for many years. The reality is that it is not an easy situation. However, that is not stopping a lot of money flowing into projects that seek to make this a reality. 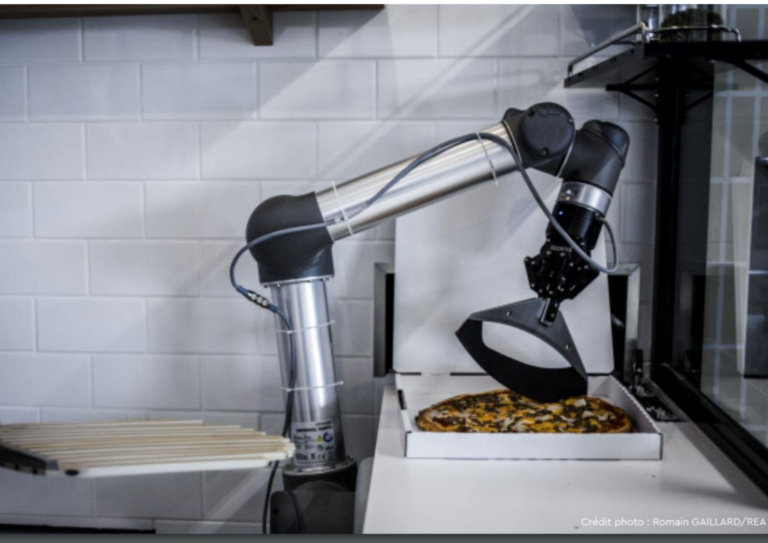 One French pizzeria is already moving in that direction. This was a technology that was 8 years in development. Hence it was not an overnight situation.

The situation is we now have a restaurant without people. Again, it is something that is very early in the process yet we can anticipate progress in this area. The technology will improve making automation easier and more cost-effective.

The new pizzeria ‘Pazzi’ is staffed entirely by robots, from order-taking to prepping the dough to putting the pizzas in boxes.

Could we get to the point where people buy pizza like they do soda or candy from a vending machine? If this is something that works, it is highly likely. Certainly there are many more restaurants than just pizzerias. However, in this quest for automation, it is a step-by-step process.

We know there is research being done in other areas of the industry. Over time, all of this will have an impact.

There is little doubt that many countries are going to have an issue with the aging population in the future. Nations such as Germany, Italy, Spain and Greece are already near the point of where Japan was in the mid 1990s. Their populations might have peaked due to low fertility rates. This results in an aging population meaning there will be less younger people to take care of those as they age.

As noted, Japan already paved the way with this. So far, it has not quite figured out a solution. Their idea is to turn to robots.

Startups are looking to address this solution. We have more projects focusing upon robotic development which is viewed by many leaders as a potential solution to this issue.

French start-up Kompaï Robotics presented their latest innovation at the VivaTech conference in Paris - a robot that has been specifically designed for healthcare providers.

There is little doubt that we see a need in many countries. Again, over time, we are finding that the technology is advancing. Robotic technology is easy to harness, so it is a slow process. However, they are finding needs which will eventually be filled.

‘The idea is to help carers and the whole body of healthcare workers in the daily tasks that a robot can carry out.’

It can also do all kinds of art therapy, activities, and some meditation. It can transport people thanks to the fact that it can move on its own.

The challenge here is that the technology is going to proceed to areas where there are not labor shortages. Once the #technology is viable, companies will seek to implement it across the board.

When it comes do delivering packages, Amazon is at the head of the class in this area. At least, that is based upon their need. This company has the need to solve the "last mile" issue more than any other company. Amazon is working on delivery robots in Finland. This is something that was tried in other areas, delivering a range of products including pizzas.

The Finnish team will carry out research and development for Amazon Scout, the company's autonomous delivery service currently operating in a few locations in the US.

According to Amazon, the Finnish team's focus will be on developing 3D software which "simulate the complexity of real life," in order to "ensure Scout can safely navigate around obstacles while making deliveries".

This is another example of those who drive for a living seeing their jobs put in jeopardy. Here again, we see early stage development yet are confident things will progress.

People should start to get accustomed to a world where many of our products are delivered by automated machines and our services are performed by robots.

This might lead some to think we have a future that is out of a Sci-Fi film and they might be correct. Automation is happening at every level and COVID-19 appears to only have pulled this forward. Some estimate that we pushed things ahead by about 3 years due to the pandemic.

The robots are coming for the jobs. As we see the #technology improve, it will make it easier to develop more machines to do what humans presently do.

I love the pizza example. I actually saw a 3D printer that could print confectionary as well. The opportunities are limitless. We just need a way to fit humans in-between to keep our economy going.

I, for one, welcome our new robot overlords.🤖

At one point Carriage Drivers were put out of business and the economy evolved.

There will be bot repair jobs, bot programming jobs, etc.

Keep in mind when there are no jobs fewer people can afford things like dining out, alcohol, vacations, etc.
When less people can afford goods and services, the market prices drop. and it acts a hedge against inflation. Eventually a balance is reached.

Economies cycle, and maybe it's time for our current job model to get a good refresh anyway.

The delivery system is what I am looking forward to the most. I have heard quite a few bad stories about how Amazon treats their delivery workers and I think it might be better automated. After all the business pursues efficiency but their systems aren't exactly the best to calculate time.

It is just mind boggling where this is all going and this will only become bigger and bigger as the technology is harnessed. Jobs are going to become more and more specialised which is not such a bad thing as everyone has to evolve. Unskilled work is going to disappear overnight.

Submit
0.00 STEM
1 vote
Reply
[-]
poshtoken  2 months ago
The rewards earned on this comment will go directly to the person sharing the post on Twitter as long as they are registered with @poshtoken.
100%
-100%

@taskmaster4450le! This post has been manually curated by the $PIZZA Token team!

@taskmaster4450le! I sent you a slice of $PIZZA on behalf of @venan.