The Impact Of Technology

In many of my writings, I try to frame what the pace of technological change is. At this point it is all guesswork since things are moving so rapidly.

Often when people hear that things are changing, they believe this is the first time it happened. While the overall pace of technological change is at an all time high, it is not without reference in the past.

Agriculture is one of the oldest professions (right after you know-what). We always had to feed ourselves and for much of history, there were two choices: kill something or grow it. This was long before the days of processed foods full of chemicals that were made in a laboratory.

Naturally, when feeding people throughout history, it took a lot of labor. After all, automating the growing of food is not easy. There are a lot of variables to consider.

Nevertheless, we did see the mechanization of that industry. Here is a chart from Ourworldindata.org: 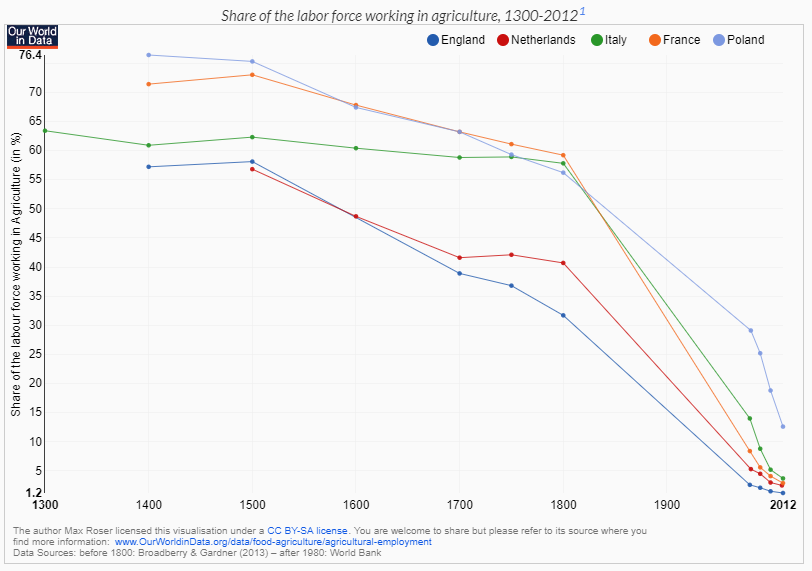 Notice how the number of people working in the agriculture industry plummeted during the 20th century. It was a trend that started long before that but it is interesting that is coincided with a massive explosion in the global population. This means there were many more mouths to feed yet we were still able to significantly reduce the workforce.

More output with less people. The only way to get that is through the advancement of technology.

Of course, that means the more recent advancements saw a greater impact: That is a radical change to a couple different sectors in a relatively short period of time. For the cotton industry, it took two decades for 90% of the people to NOT be needed. It was less than a decade for tomato pickers to see a 50% reduction.

These are important lessons to keep in mind.

People always make the mistake of forgetting that this happened before. Thus, they overlook the fact that we are now dealing with more powerful technology. This means that, in spite of taking on serious challenges, things can move just as quickly.

Making progress in the agriculture industry is not easy. Each crop is different meaning that is nothing standardized. All terrain is variable meaning it is not an easy set up like in factories. We also see planting over hundreds of acres. A variety of weather conditions have to be dealt with.

Yet we see the result clearly.

Once the technological breakthrough happens, things can then move quickly. There are a number of industries just primed to be disrupted in this manner. Right now it looks like a lengthy process but, in a decade or two, we will see the results.

We know that autonomous driving seems like an ever evasive idea. In spite of the setbacks, here is one thing for certain: they will figure it out. This is not a matter of if but when. Full self driving vehicles, especially trucks, are in our future.

Once that happens, look for the number of jobs where people drive for a living to drop at a rate resembling tomato pickers. We will lose half those jobs in under a decade.

Another field is construction. We still basically build houses the way we did a half century ago. It is still a labor intensive industry employing a large number of people.

The industry is still trying to figure out how to automate things. This is a technological challenge which has no clear answer. 3-D printing is one of the most promising options but it is not nearly enough. Nevertheless, here again, we can simply conclude they will figure it out.

We see a lot of similarities between construction and agriculture. Both present a lot more challenges than manufacturing or warehouse automation. The later was able to figure it out. We can only presume that those involved in construction research will also get there.

From our walk down memory lane, we know that the impact of technology is:

We are able to produce more with less. This is why many are forecasting major issues with employment. If a shift takes place that resembles some of the moves in agriculture, we are talking about hundreds of millions of workers around the world suddenly who are redundant.

This doesn't only impact employment. It also has a major impact upon investing. Many like to buy commodities they believe will be in high demand. Right now, anything to do with battery technology fit into that category.

While there is no doubt the demand will only increase, many do not consider the supply side. Technology means that we are often able to increase supply at an exponential rate. The process of mechanizing things means output goes up significantly.

Keep this in mind the next time people take exception to some of the forecasts that are made regarding the next 10-20 years. Do not be quick to jump to the conclusion that it is impossible. In fact, there is a good chance we already saw that rate of change in another industry.

Technology advancement is the root of innovation and a much easier way that works for humans.

We've tried human labor and it wasn't going in the right direction. Technology advancement daily keeps providing the answers for us everyday.

No doubt such change is also happening in other areas which we might not even be aware of now. More production rate with less can only b3 achievable is possible only through technology.

Humanity was always pushed ahead by innovation. The advent of fire was a major shift in the path of mankind.

We see it at each major leg of our history. Now, we are just getting them quicker than we had before.

Yes thing are now happening at a faster rate than before.

We are able to produce more with less.

The truth of why automation is pursued. I wonder what the government will do since having people unemployed isn't really that good for them. Since people actually pay attention when they aren't sidetracked by real life.

Since people actually pay attention when they aren't sidetracked by real life.

Then they get distracted by social or the mainstream media.

Do not underestimate people's ability to get lost. lol

From our walk down memory lane, we know that the impact of technology is:

technology have been having a great impact on life as it evolved, new things are discovered and life is becoming easier.

there are more result witb less effort due to the help of technology.

but seeing it from another perspective, technology has made alot of people mean of survival and while it has reduced some people's mentally.

what do i mean by that alot of people make use of technology to achieve great things in life and enjoy their life.

meanwhile technology has made alot of things easier that some can't think of any creativity, they have become even mentally.

artificial intelligence has affected them that they are now dependant on third party, maybe by salary .

That is true that some could take the approach you describe. Look at the countless hours spent on social media where people are simply living in an echo chamber.

However, for those who take the opportunity to create and innovate, it is a fantastic path forward.

As always it comes down to what an individual will do.

Some great examples of how technology changes things and quite rightly it is all about the final product costing less and more being produced. I have seen farms run with only 3 people due to machinery and technological advancements. People will need to adapt as having a job or employment is going to be a struggle for many.