The Changing Face Of Work

taskmaster4450le in LeoFinance • 10 months ago

Work is changing rapidly. It is something we covered here a number of times.

There is little doubt the remote work concept is starting to take hold. As stated, there is a demographics situation in play. The Boomers might fight this yet it is embraced by the Millennials. This means that, as the former steps aside, the latter is going to embrace this changing idea.

COVID-19 served as an accelerant to this. Like many things, it trends forward a number of years. We are watching the changing face of work.

We are rapidly approaching a point where office work is the minority and not the norm. For generations, office work was taken as a given. Of course, there was no reason to question it. Technology is changing everything including our relationship to work.

It is even going to the point where we might be seeing the last generation of office workers. Our next group of individuals entering the workforce might not know what daily office work is like.

According to a new study from the Pew Research Center, over two years into the COVID-19 epidemic, roughly 6 in 10 U.S. workers who claim their tasks can be done from home, or 59 percent, do so all or most of the time. More workers now claim they work from home because they want to rather than because they have to.

Work is one area this is going to come through.

It makes sense from both perspectives. Office space is costly. Having workers operating remotely is a major cost savings. Many companies occupy expensive downtown real estate. Of course, even if it is not eliminated, down-sizing can occur.

From the employees perspective, they get to forgo the daily commute and associated headaches with office politics. This can be a massive savings for them also.

According to another research, allowing an employee to work from home half of the time would save the company an average of $11,000 per employee, with each individual saving between $2,000 and $7,000. 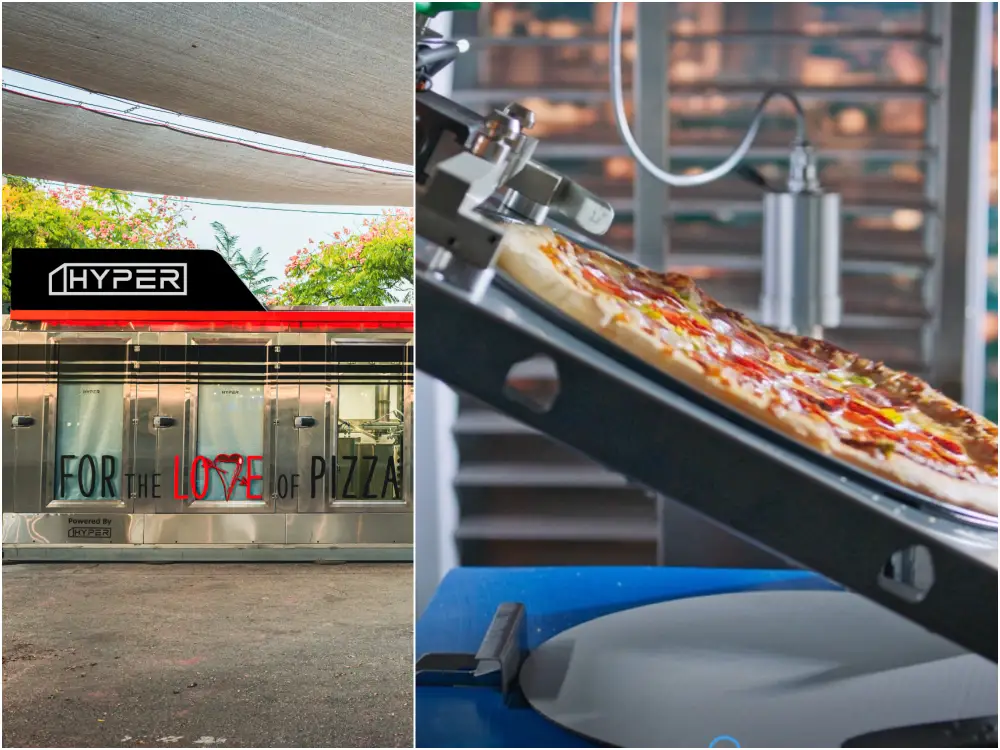 We hear a great deal about how the restaurant industry is suffering from a shortage of workers. This got a lot of attention especially after individuals started to question their relationship with work.

This is forcing companies to make adjustments. Automation is certainly going to play a key role in this going forward.

For now, we are seeing the first autonomous fast food restaurant. This is devoid of humans and can prepare the food at a rate that rivals the human counterparts.

It is a concept that many companies are experimenting with yet here is one that seems to have made a breakthrough.

Of course, this was something that started a while back. We tend not to think how much of our food production is automated already. This is especially true in the fast food industry.

At first, Hyper Robotics didn't tell people who had bought the pizza that it had been made by robots but they were surprised to find out that was the case, Shamai said.

"People ask about the robots, but the truth is that almost every food that we eat is industrial and made by machines — people just don't think about it as robots," Shamai said.

This is not going to slow down. We are likely near the peak in number of workers who are in the office. While there might still be more called back in, the reality is that more employees are going to request this. If firms do not offer it, they will likely lose out on the top talent.

Now we are starting to see automated fast food services. This, too, will continue to grow and expand. Since we are dealing with technology, we can expect the capabilities to improve as time passes. What we are witnessing now is just the first generation.

All of this is part of the changing face of work. By the middle of this decade, things are going to look a lot different.

Somehow I feel like the Home Office generation came at the worse of times and, despite all the positive aspects it brings, it works in detriment of society as a whole, and since it came because of Covid and not because we were ready, the home office generation will be one that is not united and somehow, more divided by all the tags mass media is asigning (and we gladly take) to each of us. A society that doesn't communicate with each other (in the office kitchen, for example) will slowly but surely lose many meaningful bonding.

It will be positive in the money side of things, but in the social side of things, we are already a generation of socially inept people, what holds the future for the next generations that can't interact in person but through a cellphone are so eloquent and friendly?

We're surely heading that way, the home office generation came to stay, but it is a bit scary.

COVID actually pushed people (companies) to embrace what was possible for a long time technologically. That is always the case, technology moves faster than human embracement.

As for the unity, I guess you havent been in Corporate America. That is a cesspool of negativity. It is Facebook but in person in my opinion.

So it is much healthier for people to be away from their environment.

I'm a boomer and I'm confused about today's work. My son in law works from home. He's making a LOT of money. The problem I have is that although he's tried to explain it to me many times I still can't wrap my mind about what he does. That's one of my major problems. It seems that the majority of jobs today didn't exist when I got my graduate degree in the seventies. Not only did they not exist they are incomprehensible to me.

Which brings me to my second point. How can I find a 'work at home' job? The online employment ads are no help. They're all scams.

The work from home (or remote work) is basically a transition of sitting in front of a computer tied to the cloud in an office to doing it at home.

There are a lot of jobs that were created over the last 40 years. Society does not stand still.

Every day, due to the lack of opportunity, we workers seek to improve our skills in self-employment and also in cryptography, but hopefully this reality will change a little, although with the advanced technology it will be very complicated since there are robots that work for many mens

One of the things I miss about working in an office is the ability to take a stroll down to someone’s office and have a chat with them face to face. I know some may not think it’s important but it’s good for personal morale in my opinion. Looking at them via teams or zoom is better then not seeing them but I do enjoy seeing the physical person. Then there’s the added chit chat and all that.

Having changed companies entirely and likely won’t ever work in the same physical space as my colleagues now, I think that a part of the experience is missing for me. I hope to never have to work in an office 5 days a week again but I do enjoy meeting people and getting some time to know them and their body language etc that you can’t get on a computer screen.

Automation for food is certainly taking place. I think that a place where this will take hold a lot will probably be airports first since many of them are 24/7. Makes it easier to get things to keep the food going.

One of the things I miss about working in an office is the ability to take a stroll down to someone’s office and have a chat with them face to face.

If this was an enjoyable experience then it is missed. For many, it is horrific since the corporate world can be a cesspool to many.

Yeah I guess I'm lucky in that I fared pretty well with my office work life. Had decent people and nobody was a real asshole so it made for a bearable experience. My wife has some brutal ones in her career so I get that side of it as well for sure.

The dream of most people is to be boss of their own where the idea of working under anyone won't be in the schedule of such person, which is why many choose to have a special skills in other to be self employed rather working under someone that will be in controller of their time.

We are already using machines to make the process of food much faster so I am not really opposed to machines making the food. At least I would have peace of mind that everything I get would be the same each time if nothing goes wrong with the machines or the ingredients.

I wonder if the food issue is because people are working from home. This allows them to free up more time but at the same time, they are also working from home so they just buy some food to save time.

I think it is simply due to fact they cant get workers. The automation is due to supply, not demand. Obviously the restaurants have the demand from customers.

lolztoken.com
Why did the elevator move into the apartment building?
He wanted to take up residence.
Credit: reddit
@taskmaster4450le, I sent you an $LOLZ on behalf of @tin.aung.soe
Use the !LOL or !LOLZ command to share a joke and an $LOLZ. (2/8)
100%
-100%