When are we going to overcome the scarcity mindset?

This is a serious question. It arises from an idea that seems to be circulating that EV cars sales are going to be slowed because a shortage of lithium. How many times are we going to trod over the same ground?

People who espouse these ideas are repeatedly proven wrong. This is especially the case over the last 20 years as technology took centerstage in our progress. Basically, technology is now capable of solving our issues in a relatively short period of time.

Let us take a look at some of the areas where we were promised shortages.

There was a time when serious industry experts were predicting the world would run out of oil.

Here is a headline that appeared in the Guardian:

The article was from Dec 2013, a time when the price of oil was down slightly from the high of a year before and a great deal less than 2008. However, what took place after this? When the prediction was made, oil was at $100 per barrel. As we can see from the chart, within 6 months the price collapsed. Even after the recent run up which has people complaining, we are still 30% below where oil was at the end of 2013.

What happened? How could the forecast been so wrong?

The answer lies in the fact that horizontal drilling was taking off as the forecast was being made. This actually turned the United States from a major importer of oil to a next exporter.

Here we see clearly how things went after the prediction. 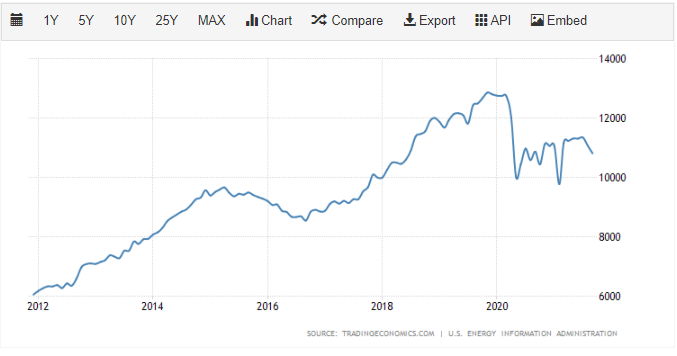 Even post COVID, we are still orders of magnitude higher than 8 years ago. We were sitting on 8 million BPD, now around 11 million which is down from the peak of just under 13 million.

Hence, the idea of running out of cheap oil was blow apart. Technology stepped in and drastically increased production. Also, over the last half decade, we had a number of major finds.

Here is another area that where people were completely wrong about their forecasts. One of the biggest claims since the 1970s is the growth in population is going to cause more starvation. After all, the belief must be that our food production is peaked and more people equates to less food per person.

The reality is agriculture is one of the most advancing industries there is. We are seeing the amount of food produced globally explode. Anyone who believed the trend of more output was going to cease was sadly mistaken.

Of course, this is nothing new, it is present within all forecasts that omit taking technology into account.

Here is the undernourished in developed countries. Of course, perhaps this had something to do with it. 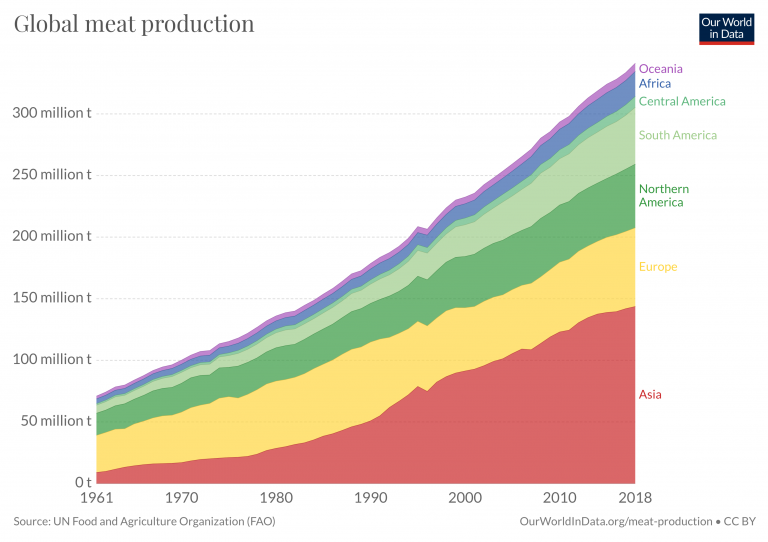 In less than 50 years, the global meat production went up by 4X. That would certainly offset a great deal of population, since that went up less than 2-fold.

Now the latest is the fact that Lithium prices are skyrocketing that the EV move is going to be derailed. After all, look at the chart. Of course, the presumption is that prices will keep going up forever. After all, ones it is in motion, it will always continue that way.

Oh the absurdity of it all. Notice how the charts shows there was a major drop in the price of Lithium, from 166 to 36. What was the cause of this? Did battery production nosedive over that time? 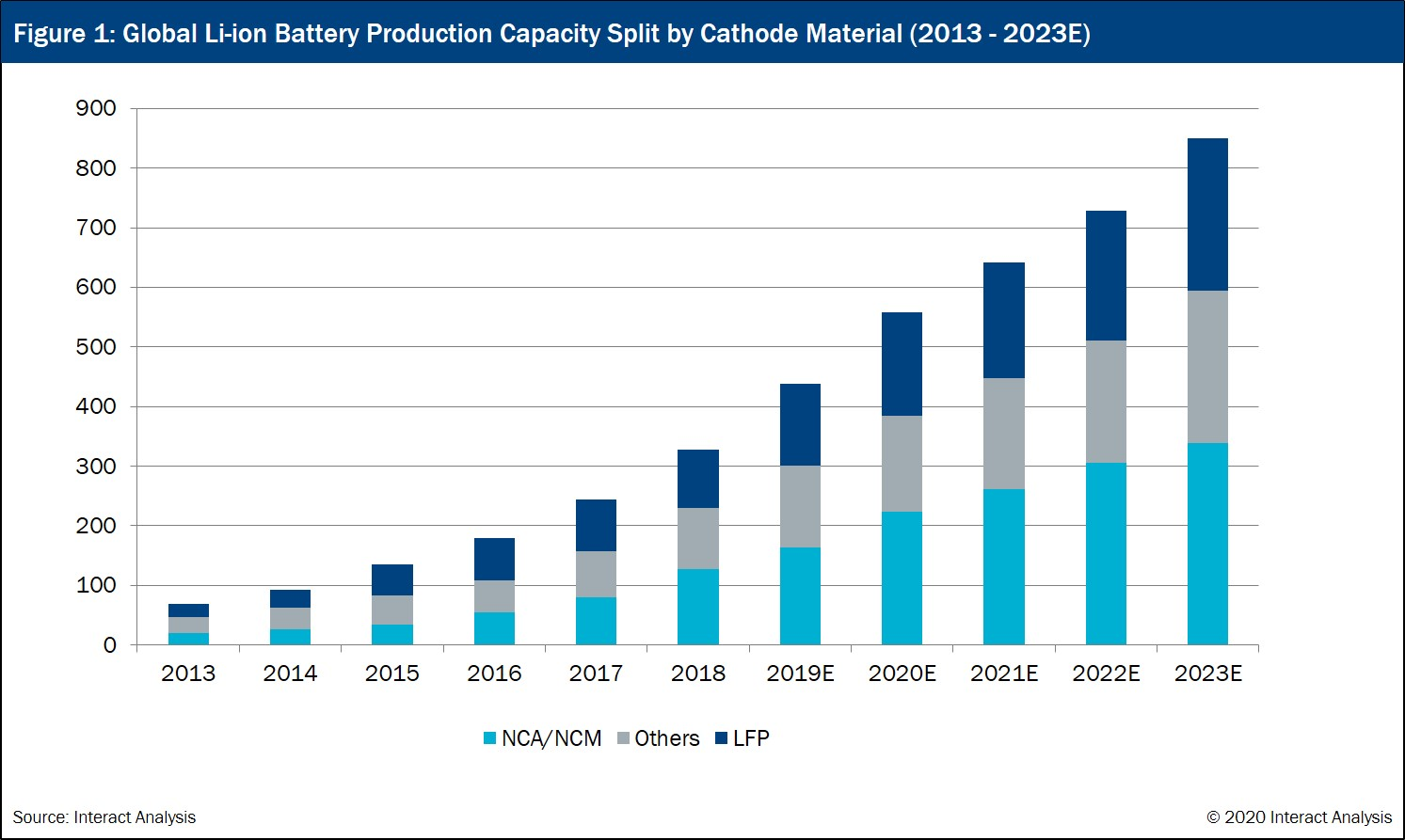 The reality is that the production of Lithium batteries keep forging ahead. Yet the market price for the commodity dropped. This is markets being markets. Eventually, we will see something similar in the price from where we are now.

However, there is something more important. Many like to claim that the switch to EVs will stall because of the price going up, hence making batteries more expensive. This does not take into account technological advances.

Tesla, one of the leading battery consumers in the world, recently started to switch the batteries they use.

Lithium-iron-phosphate (LFP) batteries use an older, cheaper battery chemistry and are popular in China. Outside of China, EV batteries are predominately nickel-based — either nickel-manganese-cobalt or nickel-cobalt-aluminum. But beyond cost savings, LFP battery cells are attractive because they are not dependent on ultra-scarce raw materials like cobalt and nickel. Notably, Tesla CFO Zach Kirkhorn confirmed during an investor call Wednesday that the company has seen pricing impacts to nickel and aluminum.

As we can see, even though they still use Lithium, switching to Iron is allowing them to move away from scarcer materials such as Nickel and Cobalt. This could more than offset the run up in the price if Lithium.

Of course, none of this covers improvements in the mining of Lithium and other advancements that industry makes. As there is a greater need for the material, producers are going to have to try and keep up with demand.

It is very likely there is a lot of money flowing into R&D to get Lithium out at a much faster pace as well as for less money. This is how companies operate. Lithium miners are going to try to get market share from others. A great way to do that is to lower the costs.

We see this same mindset applied all the time. Yet, whenever someone makes a statement of this nature, within 5 years technology changes the equation completely.

Remember, by its very nature, technology is deflationary. Hence, when there is enough money involved, such as with the Lithium industry, people are going to target it for disruption. This means technology is applied to radically alter some part of the process.

It is a simple fact that most overlook. The economics of technology are something that most do not seem to understand.

In the end, technology overcomes scarcity.

I am not sure how you define "scarcity mindset."

The recognition of scarcity is often the driving force of technology and innovation.

The goal of economics is to optimize the return from our resources. Markets tend to value scarce commodities at a premium. Technology finds ways to get the most of our resources.

Technology in conjunction with sound economic policy tends to lead to a better society.

I agree that there is something wrong with the modern way of facing scarcity.

The media, of course, likes to present everything as a crisis. People who live in fear seek political solutions. The political solution generally leads to poor economic decisions and manages to make scarcity worse.

What happens to what you wrote if the economic models are not based upon scarcity anymore?

As for the point about scarcity, of course technology solves it. And that is the thrust of the article. People still buy into it in particular areas even when there is ample evidence of technology overcoming that issue.

What happens to what you wrote if the economic models are not based upon scarcity anymore?

This idea assumes that the economic model creates realty. While there is some truth to the fact that policies and perception affect the economy, people still live in a real world.

It seems to me that the best way to create abundance is to create economic models that actually reflect real human lives.

The economic fantasies that people create tend to crash when confronted with reality.

It was not too long ago that people felt that derivatives, mortgage-backed-securities and other economic artifacts could lead directly to widespread prosperity.

These economic contrivances created short-lived bubbles in which people felt abundance, but economic realities set in when the bubbles burst.

What is the past-tense of burst? Is it burst, bursted, bursticated? I thought I was making a point and I just proved that I don't know how the English language works.

Now I wonder if this also applies to the price of the rare metals used in technology. After all I think the supply we can dig out will eventually start to dry out and we would need to rely on the harder to mine places. Or do you think that there will be some way to get the metals in space or to synthesize it?

Notice how the charts shows there was a major drop in the price of Lithium, from 166 to 36

I don't see the chart. Is it just not loading or did you forget it.

The chart appears for me.

After all I think the supply we can dig out will eventually start to dry out and we would need to rely on the harder to mine places.

The amount of minerals under our ocean floor is reported to be astronomical compared to what we found so far. For example, there is believed to be $500 trillion worth of gold under the ocean floors. The problem is getting it up, especially in a cost effective manner.

I really dont see asteroid mining impacting things on Earth. The cost to mine and bring back would be insane compared to price especially since huge finds would collapse the price. If we go down that road, I would venture to say they use it for other space related activities (like space manufacturing).

I don't know if this technology is really working in my country because everything here is expensive.

Holy shit! They want to use phosphate in batteries that is the most insane thing i have heard in a long time. The use of industrial N-P-K fertilizer (the P stands for Phosphorus) is the only reason we have seen the worlds population grow at this rapid rate and and it is also resposible for the increase in meat production you also mention. Phosphorus is essential for all life, including plants, animals and bacteria–it is a fundamental component of DNA, RNA and ATP. There is no substitute for phosphorus in crop growth and therefore in food production. The main way we get phosphate today is mining phosphate rock that is very scarce. Useing the element that is one of the limiting factors for life on our planet to make car batteries seems like the the most short sighted solution anyone could come up with.

We need to realise that the earths resources are like bitcoin there is only a finite amount. Shit is not gonna hit the fan when we run out of a resource its gonna happen way before that. We live in a economic system that is build debt and extracting natural resources at an increasingly exponential rate. As soon as the extracting peaks and starts to slow down just a little, the system we have build is in big big trouble and i dont see technology fixing this at best it is gonna delay it. Saying that peak oil/food is wrong since called the date to early dose not make theory irrelevant.

My father was an American citizen but he was not American. He was an old-world European. He was always concerned we were going to run out of clean water even though the Earth is 75% water, the oil discussion would cause him to get angry as he truly feared a world without oil.
I also have fears of running out of basic materials. I think you are right as this will only limit us, by indulging in unfounded fears. Recently (last few months) I have been focused less on fear and more on just getting things done.