taskmaster4450le in LeoFinance • 6 months ago

And so it continues.

With the passing of the infrastructure bill, the United States government is spending more money. This is part of a much larger agenda that the Biden Administration wants to implement. If it gets what it is seeking, we could see a hefty $3.5 trillion payment coming do.

Of course, most of this will be financed through debt, which is the way of governments.

The "money printing leads to inflation" crowd is already going berserk. Surely all this is going to lead to hyper-inflation.

If that was the case, please explain Japan. That country starting printing in the mid 1990s. Many forget they invented the idea of quantitative easing. Since they started, there were more than 70 QE projects put forth. Yet still they are living in a deflationary super cycle.

Moving on from this, this article is going to point out a few things that will help frame the issues with the long-term inflationary fears.

In my recent video series, I discussed the idea of Technology or inflation. This concept simply stems from the fact that technology is deflationary. Hence, if one believes we are in a technological age and a major expansion in this area, then it is impossible to substantiate long-term inflation.

The traditional idea of inflation does not apply in a digital world. Quite simply most people look at the results so that is what we will focus upon.

Here is the main idea:

Money printing will lead to a situation where there is too much money chasing too few goods and services.

Most of us read this at some point in our lives. There are a couple problems with it.

To start, there is the issue that one component is left off: labor. That is part of the economic equation which will drive wages higher if this is indeed the case.

Secondly, the concept is impossible in the digital world. There is no limit to the items since the marginal cost is right at about zero. Once something is in digital form, it can be reproduced an unlimited amount of times.

Consider the idea of digital downloads. How many downloads does it take before Apple™ has to raise its prices due to scarcity? Obviously it does not. If a million people buy and download a song, the next one will be at the same cost. This could extend into the billions. It costs Apple™ nothing extra for each download. There is no limitation with the product, only bandwidth.

The key is this is running through many facets of our economy and will only grow.

Let us see the amount of money that is involved.

If we look at the application store for that company, this is what Statista puts it at: That is $72 billion spent on downloads which carry zero marginal costs. Also notice the growth that is being experienced. That is exponential and likely to continue.

If we step further out, we can see cloud services. That is very popular in this era. In 2020, we come up with a rather large number.

Here we add more money to the digital pile. Cloud services raked in $312 billion in 2020. This is an industry that sees their costs actually drop over time since processors and memory decrease as well as many server farms converting to renewable energy. They are also continually to optimize the software architecture, further driving down the costs.

Here again we see something that ultimately provides near zero marginal cost across the totality of the cloud operation.

Digital marketing software is also a growing industry. Let us see how the projections look there: The raw number isn't the most important factor here. What really stands out is the CAGR. With a near 20% growth rate annually, the numbers jump very quickly. That is how we could see an estimated total of $182 billion later in this decade.

Of course, if we step back, we can see a similar trend in software in general. Andreeson was right with his statement highlighted at the beginning of the article.

Again, from Statista we see this: 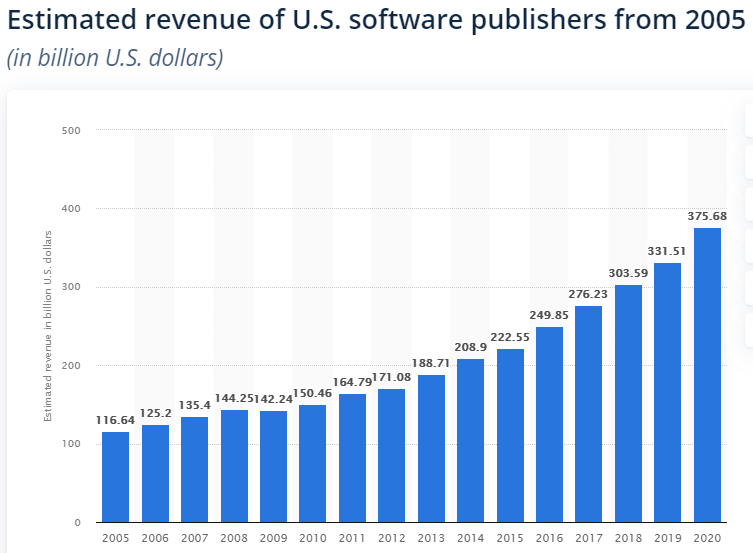 We are at $375 billion and growing at a very fast clip. It looks like we see a CAGR there of around 13%. That means we could see near $700 billion spend per year just for US companies within 5 years.

The hyper-inflation fear (in the USD) is ignoring reality. We have over a trillion dollars in just the examples here. Each of these carries with it a major deflationary component as well as low marginal cost for each additional item.

A large part of where we are heading is the "As-A-Service" model. When this is implemented, one simply does not double up subscriptions simply because he or she has more money. After all, do you get a second mobile phone plan or Netflix subscription? The answer is pretty obvious.

The United States is already at an estimated 7% of its economy falling under information technology. This carries with it a historical deflation rate of near 30%. Looking at the growth rates just in these examples, we can see how 12%-15% is highly likely by the end of the decade. Plus as we see the expansion of AI (software on steroids) the rate could actually climb much higher.

In my next article, we will look at how much money is really needed to offset what is taking place.

Your examples are quite stunning but they would mostly highlight how the new economy is just having insane margins with no marginal costs while employing quite a limited number of people.

This is why we already agreed that UBI and other social help are inevitable (equivalent to being in some kind of jailu ask me).

For inflation, Basic Ressources, Real Estates, Food, Consumer goods, freight, ... all of these are going uo from double digits to 100%+ (for some minerals used in new technologies)

all of these are going uo from double digits to 100%+

Until an economy slowdown and they collapse.

I fully expect this number to go up as the world becomes more digital. With that the deflationary factors are likely to affect things even more and they can't even get enough money out in the normal economy.

The number is going to keep rising. Hard to see any advanced country looking to go backwards technologically.

Are they going to be buying less computers, robotics, AI, etc?

It's quite interesting, with all these online apps and tech companies taking in Billions of income through lock down why the government focuses on a smaller crypto market is beyond me.

If they want to claim tax they should start by making it illegal for these companies to set up shop in tax havens off shore. It is the biggest rort of our time and how it can continue is beyond me.

Also, hyper inflation won't occur as yet, still donkies away from that occurring. Governments need to be spending through debt to ensure people have money. A government with money = poor people.

Governments are run by big business.

To believe otherwise is not looking at what is taking place.

And that is precisely why governments have not yet and will not take the step to enter the digital economy, because they live on debt and inflation, they would never set foot in the digital business model, it is not profitable for them.

Imagine innovation slows down for a moment. Then we'll start seeing the effects of money printing. Too many government laws are making innovation hard in USA, EU etc. That'll hurt the economy even more than money printing IMHO.

Imagine innovation slows down for a moment.

Hard to see that happening. Money printing isnt going to slow down that means plenty of funding.

Too many government laws are making innovation hard in USA, EU etc.

Keep in mind that many of our technological innovations come from the military and that operates outside the laws that everyone else needs to adhere to.

Hard to see that happening. Money printing isnt going to slow down that means plenty of funding.

Money printing won't do that. But regulation will. We have idiots like this in governments: https://seekingalpha.com/news/3725111-sen-elizabeth-warren-crypto-markets-might-need-bailout-someday-without-proper-regulation

Cryptography/encryption is used by military. But most of crypto innovation has been happening in civilian business/startup space. Switzerland, Singapore etc. will have more innovation happening in their countries while USA, EU make themselves unattractive for investors/innovators.

If anything, I would be concerned that the government is spending more and more to get back less and less return in GDP. The debt is more worrisome than the inflation. They're stuck having to keep interest rates low so that they can afford to service the debt.

That is the challenge with quantitative easing; it is the law of diminishing returns. Each new succession has less impact.

We also see the added problem of more money being locked in the banking and financial system because of it. The money never makes it into the economy.

It is pretty crazy how much cloud services and whatever as a service has grown over the past five to ten years. Where I work we have so many things that are provided to us as a service. I used to try to keep as much stuff in house as possible, but anymore it just isn't cost effective to do that.

Submit
0.00 STEM
4 votes
Reply
[-]
poshtoken  6 months ago
The rewards earned on this comment will go directly to the person sharing the post on Twitter as long as they are registered with @poshtoken. Sign up at https://hiveposh.com.
100%
-100%

The government of today is not like of before nobody want to come out and fight for the benefits of others because of bad Government,you that want to fight for the betterment of others they will definitely push you out of office and that is what is affecting the enconomic of the country,they believe in printing and spending only.

Overall inflation should not be a problem going forward as it should level out and fall back to an acceptable level on average. It is the pockets of inflation that we need to be concerned about - health care, energy, etc. some of the larger sectors that all use. Each on it's own do not make a big difference but it all depends on the individual and how their spending occurs, nobody is the same.