There is little doubt that the automation craze over the last few decades has increased he productivity around the world. Countries like the United States and China saw their GDPs continually increase because of the advancements in the manufacturing sector.

This is just one area we saw tremendous progress. There is also the office production which was aided by advancements in computing and the entire digitization of information. We now can generate, store, and transmit information at a pace never seen before. This, of course, is done as a much reduced cost are to what took place in the past. There is no need for a room full of people with typewriters.

In spite of the advancements we made, there are still some areas where productivity is slowed. One is in construction which has not kept pace since the 1940s. This is a topic that will appear in another article.

We also see a similar situation, although not as bad, in the area of trucking. We are still dependent upon moving physical products around the country. This is not going to disappear anytime soon. While many approaches are being worked upon, the reality is trucking will be with us for another couple decades, at a minimum.

This does not mean, however, that truckers will still be involved. This is something that can be removed from the equation. In fact, we are seeing this being worked upon right now. 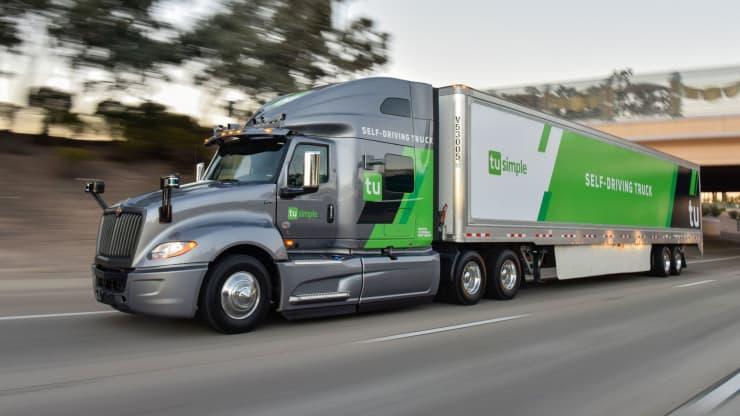 A lot of money is being invested in autonomous trucking. This is an area where vast savings can be realized if it is pulled off. It is also a $4 trillion industry so the stakes, globally, are huge.

TuSimple is one of the companies working in this field. It claims that it was able to dramatically reduce the time it took to complete a trip with a full load of freight.

The company tested its trucks by hauling fresh watermelons along a 951-mile route from Nogales, Arizona to Oklahoma City. The drive was part of a pilot project with TuSimple partners Giumarra, a produce grower and distributor, and the Associated Wholesale Grocers.

The run normally takes 24 hours and 6 minutes with human drivers and traditional trucks, but TuSimple’s automated driving systems enabled a 42% faster run of 14 hours and six minutes, the company said.

As we can see, this is a radical difference. In this situation, there was a safety driver in the vehicle to take over if there were any problems with the truck. However, that was only as a precaution.

A 42% savings in time is enormous. Consider what that means in terms of costs for the shipping on the cargo. At the same time, with something such a fruit or vegetables, any time reduction helps to get the product to the end user quicker.

The true value of automation is the ability to operate without the hassles that humans present. For example, there is no need to stop for dinner or rest room breaks. There is no illness or distracting factors. The truck can simply run as long as it has fuel.

Of course, the real exponential gains will come if we achieve this on a large scale. If countries have autonomous trucks running day and night, we will see a massive increase in the amount of cargo moved. This is the goal of many of the companies who are investing in this research.

Presently, the trucking industry is dealing with a shortage of drivers. The safety driver is there to adhere to regulations. There is hope that they will be removed by 2024 as the regulators see the technology improving.

One way they are likely to fast track things is by having the autonomous feature handle the long haul and then get human drivers to take over. This means the trucks will handle the interstate operations which has less variables than around town driving does.

While the media attention is on cars when it comes to autonomous vehicles, a great deal of value exists in the trucking industry. Removing humans from the equation will speed things up, increase productivity, and reduce expenses.

The only drawback is that it could end up costing millions their jobs.

Transportation has a huge impact on the economy as a whole. That means food gets to places faster and cheaper, the same goes for fuel, construction material and pretty much anything you can think of. The effect of automation in that industry would reflect significantly across many others.

If they can get this thing locked down it's going to save a lot. In terms of resource usage. We waste so much gas etc by sitting in traffic, going above speed limits pumping breaks and so on. If everything was autonomous and working in sync it would eliminate much of this wasteful ness. Again as you said though at the expense of thousands if not millions of jobs. However I feel it's going to be years before a driver isn't required behind as a back up. But not sure how someone could actually be alert and aware sitting there letting a robot drive.

You bring up a point that most miss about autonomous vehicles. To start, they will drive like grandma obeying all speed limits. However, over time, as systems improve and people are removed from the equation, we will likely see the speeds increased. There is no reason why these vehicles cannot be traveling at 100 MPH on highways if all other vehicles on the road are autonomous.

Will be very interesting. Humans make errors, Humans design errors, either could work

Well trucking isn't an easy job and the supply side issues were already hindering the economy. I think it would be a good change but I do think it is definitely a change in our normal job market. I do think there are plenty of truck drivers right now so I wonder how the job market will adapt to these changes.

Its truly gonna be a great innovation.

But to me i still see the risk involved in self driving vehicles as greater/more especially with certain road networks.

And then it could mess with the economy.

This is going to be huge when it hits the streets officially. There's a lot of money in transportation and a lot of risks involved. Getting humans out of the equation has its good and bad sides.

That said, I imagine how many sensors these trucks would have. I guess it's the same as the Tesla automated cars.

I am not sure. Tesla cars have 8 cameras. I have no idea what this truck has. Plus we are putting sensors in everything these days so the computer system will be able to read all that is out there. We are generating 3-D maps of everything.

This topic always makes me think of that episode of the Simpsons where Homer becomes a trucker and him and Bart go out on the road. It is pretty funny.

I see a lot of potential for the "hybrid" version of autonomous trucks: driving autonomously on the highways and the human driver the rest of the rip, because in crowded places it's harder for autonomous vehicles to make the right decisions

I would imagine this is the likely phase that will be implemented first. We could operate in that environment for years while the technology improves and people get accustomed to autonomous vehicles. Driving a truck around town is very difficult; it is a lot easier on a highway.

In Brazil, unions would be against it, because that way they would not earn money from the truckers strike, haha