Another Company Looking To Disrupt Housing

Over the last few months, I put together a number of posts describing the progress being made with contour manufacturing, aka 3-D printing of homes.

The thesis simply is that construction is one of those industries that is sadly lagging the rest of the economy. In fact, over a 60 year period, this industry never moved. 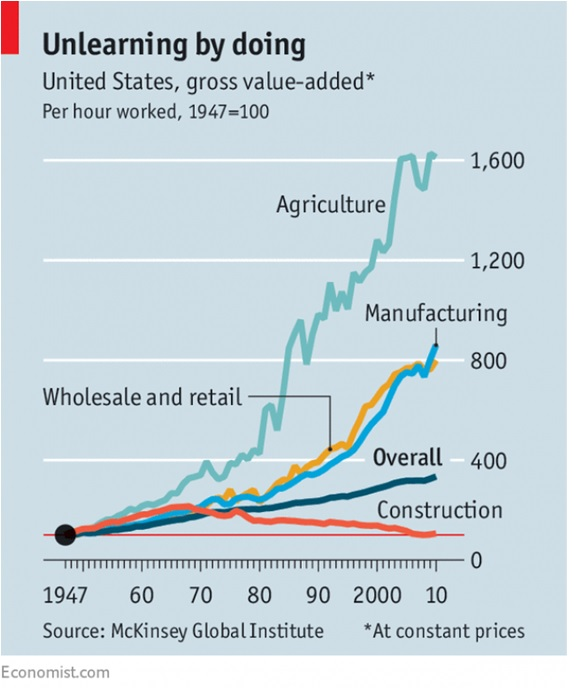 McKinsey took a look at construction since 1947 and compared it to other industries. The others listed there obviously saw great advancements in technology and automation. It should come as no surprise that Agriculture is up 1,600% while manufacturing did an 8x. Yet construction, is basically at the same time (or was in 2010 yet it didn't change) in terms of the value added to the United States economy.

In other words, it is still producing an impact like it did in 1947 while the entire economic value grew by almost 400%.

This should come as no surprise since construction is still basically done the same way it was years ago. Sure part of the construction of homes advanced some yet it is still the same basic premise as it was for the past 100 years. This is reflected in the numbers.

Of course, can you imagine what the growth rate of the United States economy would be if the construction sector kept pace with even manufacturing. We would be light years ahead of where we are now.

Hence why this is one of the industries that is primed for major disruption. In the technological era, there is little that is going to be untouched. The ones that are at the top of the list are those industries that were uninterrupted. That is the proverbial low hanging fruit.

As mentioned in other articles, 3-D printing is one approach that is already seeing great potential. The few homes that were built using this technology are coming in around half the cost of traditional construction.

It is obviously possible to get enormous value added growth rates. Here is a chart of the international scene. Look at who is negative and who positive. Again, this should come as no surprise. In this window, the U.S. goes backwards while China explodes forward. This is a short segment confirming what McKinsey found to be the case since the late 1940s.

Now we see another company that is getting in the mix. This one is backed by a heavyweight, Berkshire Hathaway. Buffett's company has its eyes set on getting a piece of the multi-trillion construction industry with modular construction.

The basic premise is to build houses in pieces, off-site, then assemble upon installation. This is akin to the container idea yet using more technology to create something that can scale.

Also, whereas this idea was tried before, most failed due to the overhead, especially in moving the finished pieces. As we can imagine, moving pieces of buildings can be a transportation and logistic nightmare. 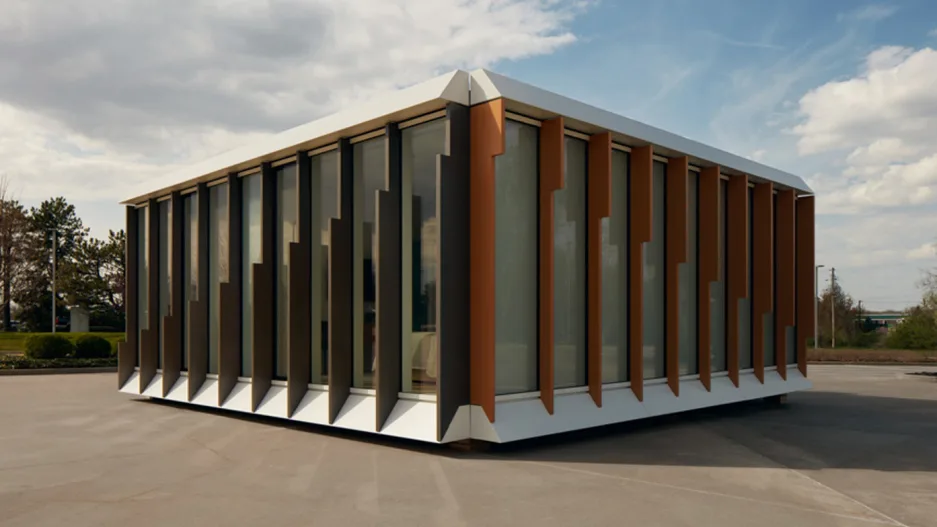 This company, MiTek, has a solution.

MiTek’s innovation is a module that can fold. Instead of large steel boxes that have to be carefully routed under bridges and overpasses on the back of a truck, MiTek’s collapsible modules fold flat, easing transportation to job sites. That broadens the geography the company can reach, compared to the roughly 400-mile radius a typical modular builder can service economically. Without factories sprinkled across the country, most modular builders can scale only so high. MiTek’s approach would send its preconstructed flat-pack modules to be finished and assembled wherever the project happens to be. “This is one major step towards decentralizing the supply chain and saying modular can happen all over the country, because you’re not schlepping these massive things,” Forster says.

As we can see, this makes a lot more sense. A modular design can be produced in assembly line fashion, shipped to warehouses near the jobs sites, erected using local labor, and then hauled to the final resting spot.

Of course, this is going to cause some disruption in the amount of labor required.

Here again, we see an obvious fallout. The key to a great deal of technological savings is to reduce the labor expense. In construction, the human element makes up a great deal of the cost. This was unavoidable in the past but might not be going forward.

We can expect the same thing to happen in the construction industry. Jobs are going to be a casualty of the progress that is being made. Once again, technology is not friendly to those working in fields that are being disrupted.

Nevertheless, this is going to happen. There is simply too much money on the line. If the likes of Berkshire Hathaway are throwing its hat in the ring, bet the ranch others are lining up.

It will be interesting to see where things stand by the end of this decade. I would expect these breakthroughs, along with other innovations, will bring down the cost of construction by a large margin. Do not be surprised to see 75% reduction in construction costs by that time.

A lot of money is flowing in to look for an answer to this situation.

Amazing. Just I watched a documentary about Origami and its appliances of folding in chemestry, physics and actually anything in society.
It is amazing how strong folded structures are. This ties into 4-D printing. Do a search on that if you want to see some real interesting stuff.

That's interesting... it seems like there has been A LOT of innovation in the housing industry over the last few decades though, and only a handful of things have stuck around. I was looking into monolithic dome homes a little while back too, which could be another piece of the puzzle (totally different though). Thanks for sharing! :)

There were a lot of attempts at things yet it did not reveal itself in the numbers. For whatever reason, little was adopted since houses are still basically built how they were decades ago.

I think this is going to change since it is an industry primed for disruption and there is the need at present. We need more housing and need it for less. That is gearing things up to attract a lot of innovation.

I agree. My guess is there is A LOT of pressure from the other side to quash innovation, but I hope we see a quick shift in the industry that helps the most people with the least effort and friction.

It is really good to see many new companies coming up aimed at significantly reducing housing prices, while maintaining some level of quality. It is so needed, and I hope some of them become really successful in making housing affordable.

There is a need for it without a doubt.

Having been involved in construction for most of my life I know that you are correct because another factor that hasn't changed much is wages and what a contractor can charge for their services. Take painting an apartment for instance, the price is about the same as it was thirty years ago. This industry is dying because it is harder to earn than it used to be. Fortunately for me I am about to retire from that field and I will be doing online marketing for a living. I feel bad for craftsmen because they are not valued enough in our society. Wherewould we be without good craftsmen?
Thanks for the great article

That is true but without innovation, that is the point: there is a limit to what can be charged for certain services. If not, the price of a new home would be double what it is today.

Thus we enter into the affordability issue. When we see a spike in supply costs, that really makes things worse. The only area to save is labor.

It is just the way things are. And now they are looking at ways of cutting labor.

Thanks @taskmaster4450le
That is a good point but there is only so much innovation that can be done by a craftsmen. If people no longer want good craftsmen then quality will suffer. They have a long way to go before they will ever create as beautiful buildings that real Craftsmen can create. If people want cheap computer built houses then look forward to drab looking buildings with no artistic quality. I guess maybe there will be no need for real craftsmen in the future. maybe that will be what people give up to save money. Very Sad

Who cares about those labor unions. I think the technology should just improve so the costs of building can be lowered. Also the fact that you can go to different places then haul the finished products makes things go by a lot faster. You can literally have hundreds of parts going on at the same time compared to the current system.

Well the unions still thing they have relevance. They are operating like it is 1970 when companies could not completely automate things in, say, 5 years. Over time, they are finding they have little ground to stand on. Even one of the most powerful unions got slapped hard, the UAW. Automation took place in that industry quickly (over a couple decades).

I think they are going to need to do something about the materials for this to be really sustainable. I guess I don't know for sure what they are using to 3D print the houses. I am actually surprised that when you figure in the cost of the raw materials and the production process the cost is less than a traditional home. I saw those Lego style homes that they were making a while ago. Those were pretty cool, but again I don't see them being totally sustainable if they are using plastics as the materials.

I guess I don't know for sure what they are using to 3D print the houses.

So why not just use cement blocks?

truly amazing where this is all leading. I hope you are right as reduced housing costs would change things for billions of people around the world.