taskmaster4450le in LeoFinance • 10 months ago

We hear a lot of chatter about hyper-inflation and how all the money printing is going to lead to that end. People seem to believe the economist who live in a theoretical world where money printing leads to inflation. Of course, we see a different result in the real world but why ruin a good theory.

Tell me if you heard this one:

Deflation is bad since falling prices means that people will put off spending, knowing the prices will be lower in the future. This will have a negative impact on productivity, hence GDP.

This is another theory that is espoused by those in the theoretical Land of Oz.

How are things in the real world?

Here we see the semiconductor industry. Notice that it has a CAGR of 8.6% over the last 40 years. Of course, it is important to note that the annual rate of depreciation has been near 50 percent for more than 5 decades.

So much for that theory. Of course, most reading this are aware of how things work. After all, we all have smartphones, televisions, and laptops, devices that we know will be less expensive with more features 3 years from now. Yet, in spite of this, we buy them anyway.

If those living in the Land of Oz are wrong about deflation, perhaps they are as equally misguided about inflation.

Here is the reality for the 2020s. What occurred in the 1970s is no longer relevant. Today, the more money that is printed over time, the more we see deflationary forces at work. In fact, more money is required just to offset the deflation that is added.

Read that last line again because your economics teacher at some fancy school never told you about that. These are the same ones who are at the Federal Reserve, all 600 of them, and none of them understand why the last decade, in spite of record money printing, they missed their targets most of the time.

Once again, we can turn to a chart. Notice the exponential rate of spending in comparison to GDP over the last couple decades. Also, focus upon the last few years and how the pace is heading almost straight up.

This is important for one reason: Technology = Deflation.

Technology, over time, drives down prices. Often, technological advancement makes things free. What was in the physical world at one time now is in the digital. Thing of things such as photos, encyclopedias, maps, music and video players, and communication avenues. All of now have a digital counterpart which basically makes them free.

We can see the impact of the above technological spending as a deflator in relation to GDP. 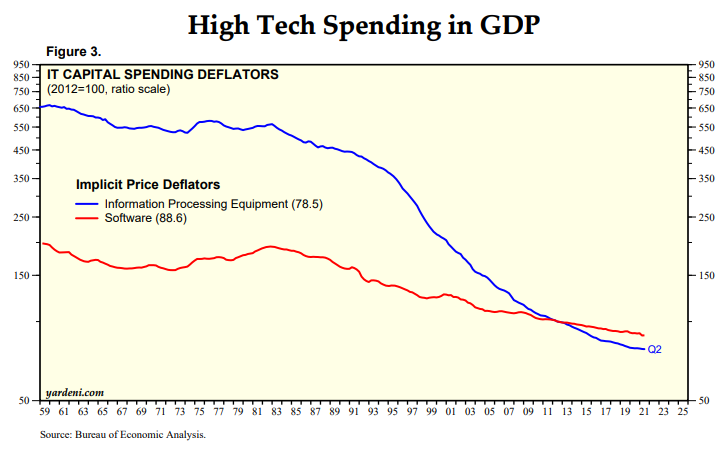 Here we have a situation where, once the technology spending started to increase in early 1980s, the impact was being felt. This has kept going throughout the last four decades. There is one thing that requires pointing out. The impact from software was a lot less than Information Processing Equipment. This makes sense since the deflationary rate of software, historically, is around 17%, far below the hardware counterparts.

What is worth mentioning is the fact this will accelerate. With all that is taking place with algorithms and AI, it is likely that we see the impact spread to a larger section of the economy. An example of this is image recognition software. It is estimated the deflation rate on that is 65%-70% annually.

When money is printed, in this era, that which makes it out into the economy, mostly ends up in the technology arena. Think of what the most valuable companies are. They are the likes of Apple, Microsoft, Amazon, Google, and Tesla. These companies spend an enormous amount of money on technological development. We also see a company like Walmart investing billions into technologies such as autonomous trucking, AI, and robotics. The same holds true for Home Depot, McDonalds, and UPS.

Eventually, all this investment has a major impact. Let us look at a chart that depicts the price of oil over the last few decades. After the spike in 2008, we saw a collapse due to the Great Recession. Once things started to recover, we saw oil once again top $100 per barrel and remain their for a couple years. Then something interesting happened. 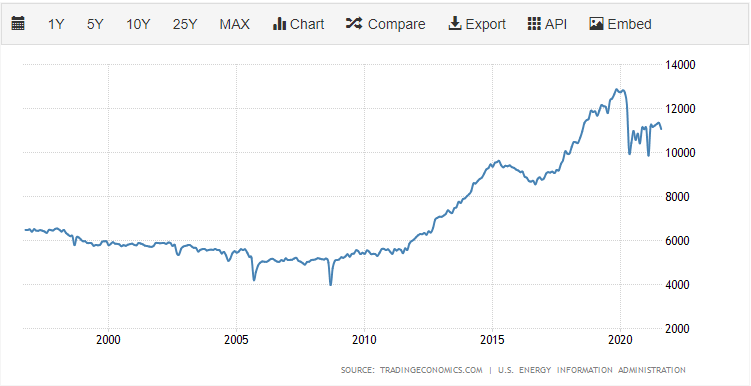 Notice how US oil production really started to ramp up around 2011. It coincides pretty closely with the peak for that time period.

Does anyone recall what took place at that time?

Here we see where technology was the answer. Horizontal drilling started to take off, allowing the United States to dramatically increase its oil production. This, of course, affected the global supply, pushing prices down. Even today, in spite of the massive run up over the last year, oil prices are still 25%-35% that time period.

This is an example of how a technological breakthrough can impact an entire global market. Naturally, since oil is the number 1 commodity, we are dealing something that has very long tentacles.

What are some other things that are seeing massive investments. How about batteries? Of course, now they are messing with batteries that are made from iron ore, which is even cheaper.

Over the next decade, we will see massive money put into:

These are just a few of the things being worked on today. Any of these that enter the mainstream bring with it massive deflationary forces upon the industries that are disrupted. Throw in a few things such as climate controlled vertical farming, 4-D printing, and advancements in the material sciences and we can see how things are going to change rapidly.

Of course, in spite of all this, there will be those who scream about hyper-inflation due to money printing. For those people, simply refer them to the country that invented quantitative easing, Japan. They had more than a couple decades where things went in the other direction in spite of the Bank of Japan's best efforts.

Now, in the 2020s, all these Central Banks have to deal with major technological forces that are growing everyday. It is why they are going to have to spend tens trillions to just keep the global economy from falling off a deflationary cliff.

The impact upon labor is an obvious result of this advancement.

Submit
0.00 STEM
401 votes
Reply 11
Sort:
[-]
poshtoken  10 months ago
The rewards earned on this comment will go directly to the person sharing the post on Twitter as long as they are registered with @poshtoken. Sign up at https://hiveposh.com.
100%
-100%

Watching this one closely. Except of technology getting cheaper I can't see this coming in any way. It just doesn't add for me. How would wide adoption of deflationary crypto assets would play out in this scenario? Can't we get fiat money inflation anyway then?

Oh the battery cost dropping is good since it's going to help us on the energy side. Now that Japan has kind of recovered somewhat, do you think they will get inflation?

Right, printing money does not always causr inflation. If there is a recession in a country or in the world, it could cause deflation as well.

I'm impressed once again with the quality and the detail of your post. Huge fan of this inflation vs deflation discussion. Once again I would like to reference Cathie Wood the rockstar fund manager which is making very similar assumptions and conclusionss about technology leading up to a deflationary environment through increased productivity. Couldn't choose a more interesting time to be alive.

I agree with your analysis about technology and deflation. However just wanted to note that if central banks miss a day fighting deflation I think the debt would collapse everything (eventually). This cannot happen especially in a world of artificially suppressed commodities (silver for instance).

Interesting points. It's true, economists seem to overlook the technological progress which is disrupting every aspect of our lives and making everything cheaper and cheaper. There will be more and more people capable of affording what's being produced, while it seems that AI is creating new job opportunities rather than taking jobs and income away from humans.... Epic time to be alive!

Very informative article! Thank you so much for this down right dull, down to Earth great economy lesson! Keep up the good work and all the best! :)