Cryptocurrency: The Experts Are Often Wrong When It Comes To Technology

taskmaster4450 in LeoFinance • 10 months ago

There is no doubt the Internet had one of the biggest impacts upon society we ever saw. Where it ranks is debatable yet if we think of the foundations of society, fire, the printing press, and the steam engine come to mind. For the developed world, the Internet is a necessity as opposed to a luxury. This will only grow in the coming years.

For a while I believed that blockchain and cryptocurrency would dwarf the impact of the Internet on society. These technologies are likely to have 100 times the effect. We are already starting to see some of the potential unfold before our eyes. It is exciting to consider what things can look like a decade from now.

That said, there are detractors. Many feel that there is a lot of hype and very little substance surrounding both blockchain and cryptocurrency. The fact that it has not taken over the world in a few years has many scoffing at it. This is coupled by the fact that most do not understand what is taking place.

This is not without precedent. A similar thing happened during the development of the Internet. I went back to compile a few of the ideas that were presented during the 1990s, a time before the Internet became widespread.

What is fascinating is these people are very intelligent. It is not as if we are dealing with people who had no idea what was going on. Many worked in the field of computer science.

Here are a few of the thoughts about the Internet at the time. 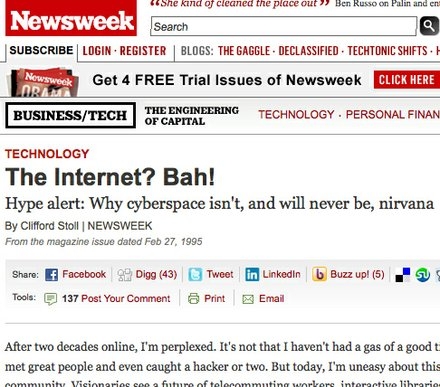 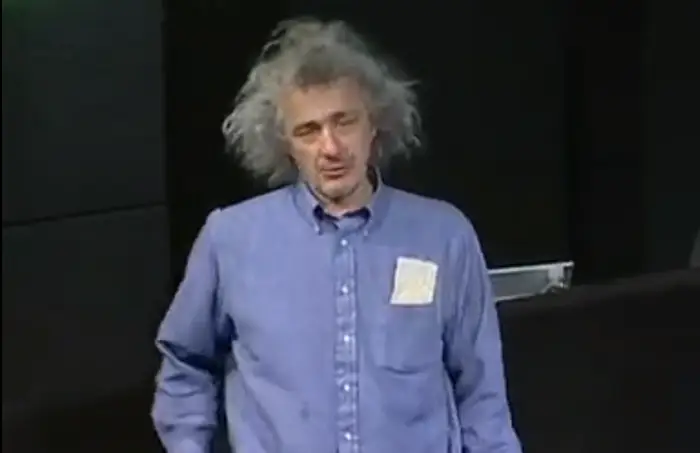 The interesting thing about Stoll, at the time of his comments, is that he was one of the early users of the Internet. He already had two decades using it. The scientific and academic community was the first to get involved, sharing data back and forth during the late 70s and through the 80s.

Here we see a user of the technology who scoffed at the notion the visionaries had. It appears his knowledge of the technology and how it worked actually went against him. He was unable to see the potential that was before him on a regular basis. We have a similar situation today. As they say history might not repeat itself but it does rhyme. There are many intelligent people with outstanding credentials who do not feel that blockchain and cryptocurrency will go anywhere. The claims being made by the visionaries and futurists are absurd in their minds.

Is it any different from the claims that were made a couple decades ago and what was thought of them? I think not. In fact, it is very common for a technology to get slammed by many. Certainly, there is often a great deal of hype associated with a particular technology, one which often fails. Does anyone remember the excitement over 3D televisions? We could also point to virtual reality which spent the last three decades going through many different hype cycles only to end up at the point where we are still waiting.

The technologies of blockchain and cryptocurrency are still rather young. We are still in the early stages of development. That said, we are now more than 11 years since the start of this development. The fact that activity is only increasing tells us the Lindy Effect is going to keep expanding. Since we are on the upward swing of the development curve, we can see a lot of decades ahead for these technologies.

Those who yet to see what is truly taking place will eventually catch on. Experts and non alike will not have a choice going forward. The expansion that is unfolding is consuming more people each day. It is only a matter of time before the acceleration of entrants reaches the elbow in the exponential growth curve.

If we look back over the history of cryptocurrency, we see that Bitcoin set off the first phase. This remained in place until 2015 when Ethereum hit the market. That was a major shift away from the asset based cryptocurrency and into the realm of technology based cryptocurrency. That blockchain just passed its 5th years in existence.

All this shows how new this really is. The Internet was around decades before it was even close to enter the mainstream. Cryptocurrency will end up doing it a lot quicker.

I expect that we will see near a billion people involved by the middle of this decade. Things are simply moving too quickly for the masses to ignore it for too long. That means we can expect near a 20x growth over that time.

We will see how things will unfold.

It's not that Blockchain won't be capable.
It's that WHAT do you think is ready now that's so impressive? Most would say Gaming is worth celebrating.

Gaming on BC is liken to Solitaire or Chess on a Windows LAN party v Global Multiplayer on any game imaginable at 4K, with cheer squad (twitch, YT, etc..), global fanbase (youth into adulthood), Enterprise up the wazoo, technologies emerging constantly, trillions and trillions to be the reward now and into the future.

All cross-intersecting as THE FRONTIER of Virtual/Digital Systems - 'The Future Reality' - Because really, gaming is beyond gaming at this point. The tech of VR itself actually not living up to the hype because that tech doesn't have the infrastructure existing for it to shine yet. 360video a glimpse. 3D might even make a return when VR matures. What is currently it's barrier is that creating environments from scratch for VR still requires immense resources.

AI is developing as the SUPERBRAIN that will expand on all that and essentially replace the human worker. It's in effect already and the "rollover" won't be realised until one looks back and realizes it already happened. Digital Virtual is why 2020 will be recognized as THE RESET. It already is for many industries. Human though. In "reality" is now at limit. We are useless meat packets when performing only physical actions.

But back to Blockchain..

To want to capture even a sliver of that audience is the right mentality here, but how do you think people go from all that out there to this simple ecosystem here. JUST FOR TOKEN REWARDS? ... NO. That's the crazy thing that doesn't seem to allow people here to think rationally. Blockchain has yet to barely morph into that second layer that even important heads here, that ARE committed, agree is needed. Yet no one actually has grand ideas of what. Just trying to emulate success stories/platforms of out there won't be it. Specially when really this is predominantly just code. It's great belief and optimism. But simplicity is the BC system still. That's why I see BC as DNA of future systems.

So to say "I can spit a bit of BC and a new life form emerges because that spit has DNA" is sort of a true statement. But then one is not realising that ACTUALLY, Resources build the organism. DNA just orchestrates the cell processes that transpire as that life form develops.

All that you say is true @teknow. Without a doubt, the technology is not what it is on a particular day but what it evolves into. You analogy to DNA is not far off since technologies often become expanding organisms very similar to biological forms. The different is the time of their evolutionary development.

Certainly the Internet as we know it today is far different from what was being implemented in the early 1990s. Some were able to foresee the evolutionary progress that was likely to take place. Most were not.

Today we are faced with the same issue with BC and crypto. Many believe it nothing more than hype but I feel differently. Looking at where things are today is akin to looking at the Internet in 1994 and drawing a conclusion. The evolution we will see over the next 5-10 years will spell out what takes place.

As for gaming, this shows how nothing can be viewed in isolation. We are still awaiting the progress of VR (yes the underlying infrastructure is still not there) to take that to the ultimate level. In the end, gaming will be non-distinguishable from "reality". This will be a large part of the converge of our digital and physical worlds.

You've just brushed over the actual point of my comment though. Which is:

WHAT is here that would attract any mass
numbers?

Your posts and comments are very generic. Although you use words well, you don't ever actually saying anything backed by actual or tangible truths.

I don't intend to put you on the spot, but if you are so committed to selling hope.. like:

Hive is ready for mass. This BC it's the greatest.

Then you sometimes need to be called out and asked to explain WHY you believe that..

Anyway I don't think I will get an answer and maybe everyone who reads your posts believes what you write without doubt (or just vote without even reading) so I guess MY COMMENTS are the pointless ones.

This post you made was a comparison though. Yet you based it on a single person's doubt essentially. Internet at that point (early 90s) was clearly going to be huge. The MODEM was what was holding it back. Once broadband arrived it went critical.

What PHYSICAL technology is going to to that with Blockchain? I don't see it. Because BC uses the same infrastructure, yet fails at expansion.

It's amazing to know Ethereum only hit the market in 2015 and to even look at the level Ethereum might be in 2050 is mind blowing. Crypto will surely go a long way I know it, it's just the beginning and the positives exceeds the negative and limitations

Of course, by 2050, Ethereum could be an afterthought...a chain that has little use and only a few "legacy" users.

We can never tell how one project will fare but when looking at the entire spectrum, we get a clearer picture.

Ethereum's future progress is dependent upon staying on top of technological developments as they unfold over the next decade or two. In fact, that is the situation for all blockchains. Those that do not, will get left behind.

Intelligent people are not necessarily visionary. It is easy to jump on the wagon once a technology has crossed the Chasm and entered the early or late majority. But it is very hard to predict the impact when you first that technology for the first time as you have to use your insight and imagination to foresee what can be achieved with it.

This is the reason people like Steve Jobs was unique, he was able to see and existing new technology as the first rudimentary mouse intelligent people at Xerox PARC developed, envisioned its value and implement it for the mass market.

Here's the story for those who may want to read it.

The Lindy Effect no doubt is playing a role in the survival of Blockchain/Cryptocurrency 11 years is too much for something that will never survive to keep surviving and expanding in every way possible.